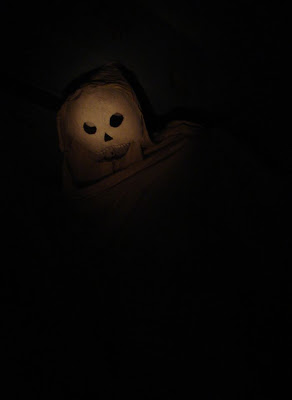 After reading the story of Jelly's Halloween party at I got 2 shoes, I thought I'd post a few pics of the haunted house I've done every year for the past few years. It's evolved a bit but last year I found the most efficient way of making it work and just copied it again this year (referring to photos taken last year to help me out). It only took myself and another person an hour and a half to put it together this year. The webcam shot below shows the layout: 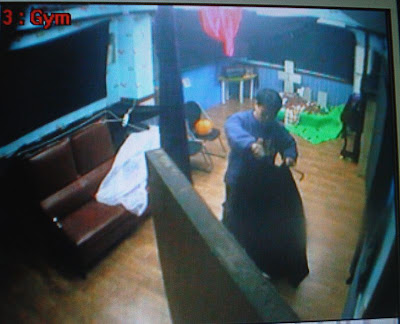 There should be black fabric was hanging down in several places; luckily it's not at the moment, or it would be more difficult to see everything. Picnic mats needed to be hung up to block out the light from the windows. Anyways, the kids enter from the right (that's the door in the foreground) and, guided by me with a flashlight, proceed to the bottom left, where they are shown the ghost at the top of this post, which is wrapped around a wall-mounted fan, so it has the appearance of moving. Then, behind the couch is a tunnel that they have to crawl through. I meet them at the other end tell them to look behind them, where they see this on the ceiling: 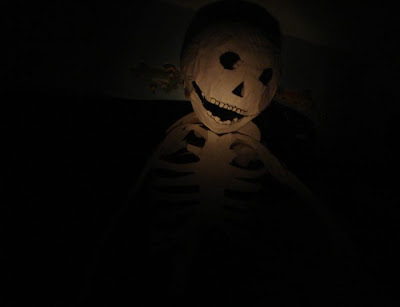 I've attached fishing line to it's arm and looped it over a push pin above it, so with a few tugs it looks like the arm is moving (well, it's startles some of the kids, I guess). Then the 'graveyard' is pointed out at the other end of the room, and as we start for the door one of my co-workers comes up behind them in a... Darth Maul mask. Unfortunately, the other, better, masks disappeared this year. Then as they run from him, another teacher chases them, and with blood makeup, bandages, and fake fangs, she is pretty scary. They I herd them out the door (where they get candy) and wait for the next group. What's missing in the photos is the music, which makes all the difference. I use the track "Aumgn", from Krautrock band Can's 1971 album "Tago Mago". It's about 10 minutes long, but an excerpt is here. Needless to say, it's an incredibly creepy track, and sets the mood as soon as you enter the room. Once the students enter the tunnel, I turn on another cd player next to the tunnel, which plays a track from Current 93's "Dog Blood Rising", so as to startle them even further (who knew declassified CIA psychological torture manuals could be so useful? Just kidding - it's not like we throw bags over their heads and send them to Syria; a flight to Uzbekistan is much cheaper). Anyways, the reactions range from jaded fourth graders who laugh at everything to younger kids who.... laugh at everything. Until they see the bandage-wrapped phantom, that is, and then they shriek like the little children they are. Heh heh heh. My favourite was the kid who laughed at everything and then when he saw her covered his eyes and ran away. I assume someone must have guided him to the classroom across the hall, because when I popped my head in a minute or two later, he was still covering his eyes.

And that's how we do Halloween in my neighbourhood.

Sorry for lack of posts; I've been down with a cold and just plain busy. I've got a half-dozen posts sitting in draft form - I just have to finish them. Unfortunately, current events always give me something else to write about...
Posted by matt at 2:17 AM