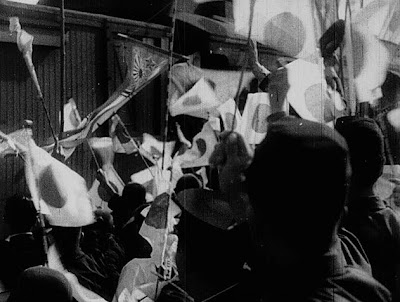 I’ve been watching films from the box set "Unearthing the Past", which Mark over at Korea Pop Wars brought to my attention awhile ago. The box set consists of four of the oldest Korean films still in existence. Three are from 1941, and the other is from 1943. These, of course, are all films made during World War II, and were thus made when Korea was a colony of Japan. Needless to say, these films are windows into the past like no other. You get to see what Korea looked like at that time in moving pictures, but, since film was used as a propaganda device, especially in wartime, you also get to see how the Japanese tried to mold Koreans into good imperial citizens ready to sacrifice themselves for the empire.

What follows is a look at Volunteer (Jiwonbyeong), from 1941. While obviously a propaganda film, it’s also a very well crafted film. Director Ahn Seok-young and especially cinematographer Lee Myeong-woo really deserve credit – some of the shots are really well composed, and the film makes use of numerous tracking shots – not bad for a film shot in the countryside in 1941. A number of the screenshots below were chosen to illustrate how well composed many of the scenes are. 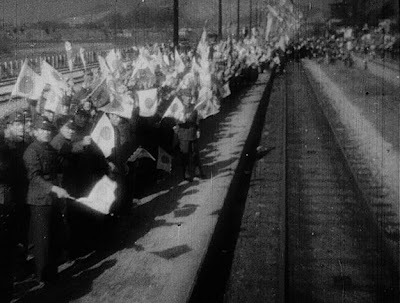 The film begins with a people waiting to see a troop train off at a station in the countryside. The main character, Choon-ho, talks with his friend who wants to become a driver, and then meets his fiancé Bun-ok and talks about wanting to get away from the countryside. He is then called to Seoul where the absentee landlord, (whose father respected his father) turns over the job of overseeing the land to the crafty Kim Deok-sam. The landlord’s sister, who obviously has a thing for Choon-ho, reproaches her brother for this decision, as she realizes this will affect Choon-ho’s financial situation negatively. Choon-ho returns home, and on his way sees young students doing military training in a field; he looks on wistfully. 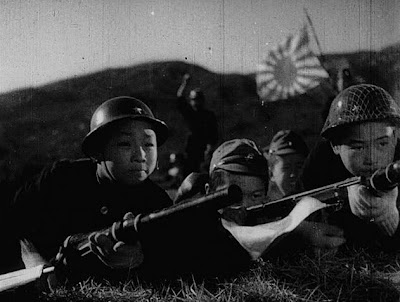 He arrives home with gifts from Seoul and, while sitting with his mother, sister, and Bun-ok, has this exchange with his sister, who asks

- Did you buy a comfort kit?
- Yes. So you can write your name on the cover and send it.
- I have something to show you. I wrote a letter to a soldier at school the other day. He replied.
- [reading] “I am moved by your innocent, sincere letter.” Would you like it if I became a soldier too?
- That would be so nice. You would be a Korean soldier then?
- Yes, if I became a soldier
- Then I would write you a letter and send you a comfort kit.
[laughter] 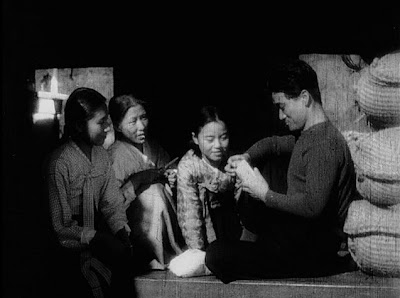 But in a conversation with his friend after leaving a building with flags out front after a ‘lecture’, he reveals why he cannot become a soldier.

- The annexation is complete now, but young koreans should serve the empire at war too. Even if we want to, we are not allowed to do so. We are not eligible. How can we really work in unity like this?
- If such a time comes, are you willing to step forward?
- Don’t you know me yet? […] We have our duty.

The accompanying essay in the DVD set calls this scene “a rupture in the militarist propaganda film”, because it reveals that discrimination exists in the empire, which bars Koreans from joining the military. Have no fear; this will later be "surtured".

The landlord’s sister comes to visit and when Bun-ok sees her (a city girl) and Choon-ho together, she trails behind them, feeling rejected. 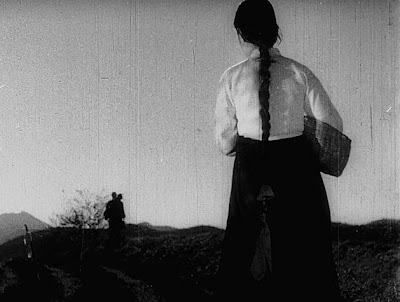 After seeing the sister off, Choon-ho runs into a Japanese friend who shows him a newspaper announcing the news that Koreans can now volunteer. 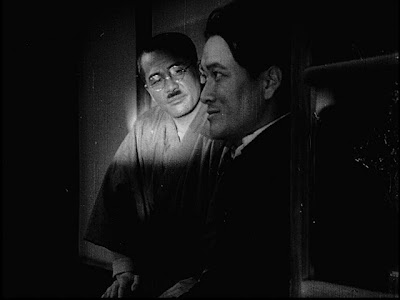 The smile on his face after reading this news disappears after he sees his friend, who was trying to hit on Bun-ok, sitting next to her. 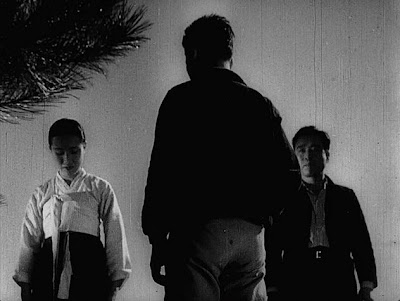 After staring at each other for a full minute (in a scene that's unintentionally funny, recalling as it does so many TV dramas), they all part ways. Bun-ok then hears the crafty Kim Deok-sam trying to get her father to forget about Choon-ho and marry her to one of his sons. The following scene in his house is quite fun, as he’s obviously the ‘bad guy’ whose greed and lust are readily apparent (not for nothing is the chain of restaurants named after Nolbu, right?). 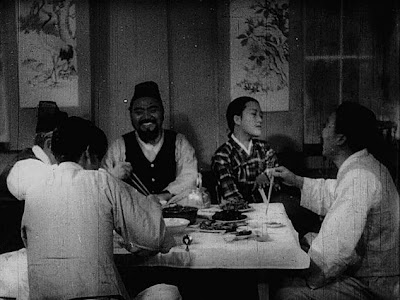 Meanwhile, Choon-ho is sitting at home in front of a map of Asia. 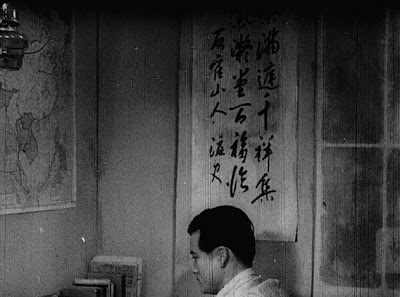 In one of the more bizarre, yet fascinating scenes, Choon-ho, dreams of joining the army. What follows are numerous shots where the soldiers march by in rows (several tracking shots are used), and the nature of this scene, with its military order and repetition, is utterly different from the rest of the film. 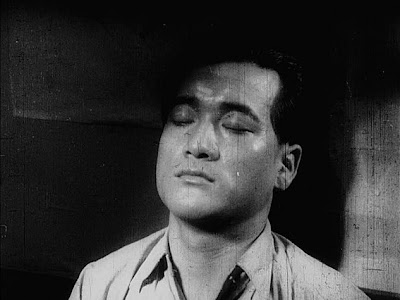 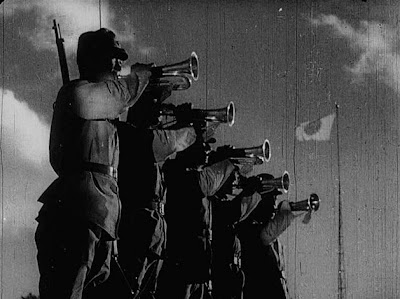 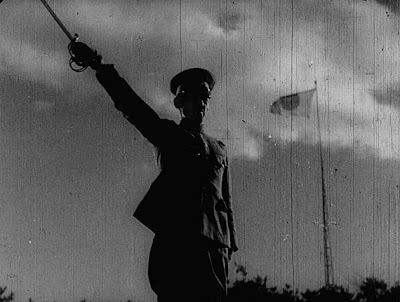 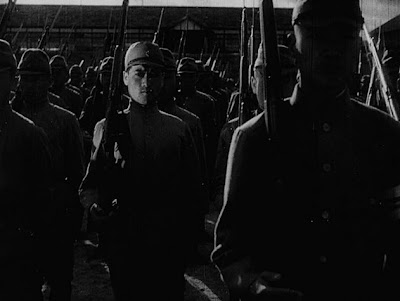 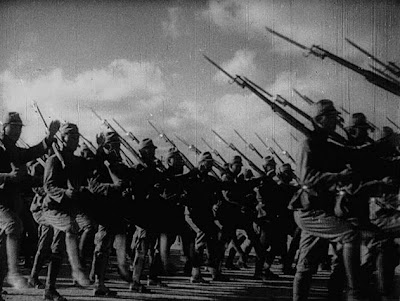 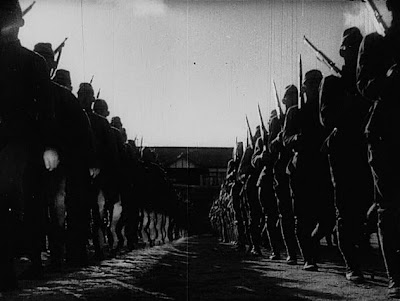 After this abrupt fetishization of the military, Choon-ho’s friend apologizes to Bun-ok, and she and Choon-ho eventually make up. In a nicely composed shot, the camera pans from her walking down the road, down to her shadow, which is joined by his, and back up to the couple again. 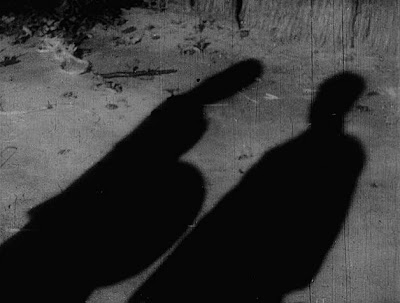 He admits that he will join the military. The results of the recruitment exam are published in the newspaper, which the landlord sees when shown it by his sister.

- Choon-ho passed the exam.
- See. You treated such an able man unkindly.
- I never knew.
- Who will look after his family after he joins a training camp?
- I should change my mind. I will help.

And just like that, joining the army is the deus ex machina which solves all the problems which arose from the landlord giving Kim Deok-sam the overseeing position. 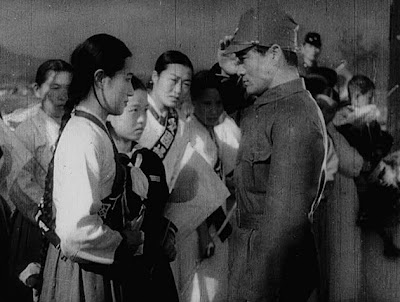 The film ends as it began, with a crowd of people at the train station seeing off a troop train, except this time Choon-ho is on board. Bun-ok and his sister are there to see him off. What’s interesting is how stoic they are. His sister looks neither happy nor sad. 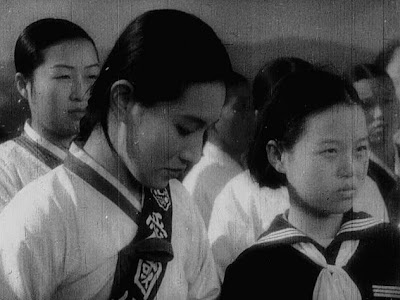 "Go off and die for the empire then, jerk."

In the final shot of the film, Bun-ok’s face is just as mysterious. Again, she’s neither happy nor sad, though perhaps the beginning of a smile can be discerned. Is this failure to cheer or bemoan his departure an example of sullen resistance to the Japanese propaganda effort (and censorship)? Or does it reflect a time when people were less likely to show emotion in public? 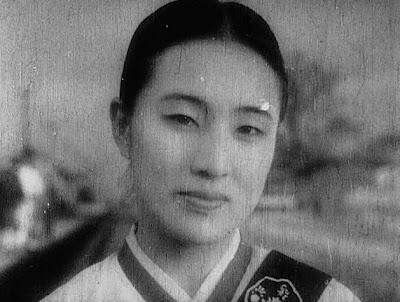 Whatever might explain the above shot, this shot is worth looking at: 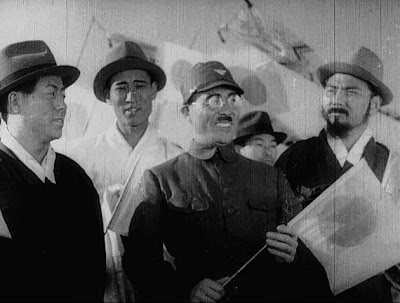 The Japanese character (the one who told Choon-ho about the opening of the military to Korean volunteers) would likely be termed a caricature of a Japanese person today, except that this film was made at the height of the Japanese military control over every aspect of society in the Japanese empire. What the censors missed was this: in the final shot showing the Japanese character, he’s standing next to the crafty Kim Deok-sam and his sons, who were so clearly identified as the ‘bad guys’. Perhaps, in 1941, that was as much resistance as anyone could hope for.

It would get worse, however. In the aforementioned box set, three of the movies, including Volunteer, are from 1941. The other, Straits of Chosun, is from 1943, a year after it was deemed that every line in every movie had to be spoken in Japanese.

This film (like the other film from the box set I've seen so far), likely began as a typical story - in this case, of a man who loses his position and tries to get it back - which the Japanese authorities insisted be changed to add military propaganda elements. Those elements, which have all been described above, are easy to see in the film because they're so abruptly added in, often interrupting the flow of the story. Choon-ho's conflict with Kim Deok-sam likely would have made for a more interesting story, but the film as it stands is still well made, and is fascinating to examine as a piece of propaganda. It's because of these propaganda elements, however, that this film will never be considered a "worthy" piece of Korean cinema history. It certainly doesn't appear in the Korean Film Archive's top 100 films. Unfortunately, nationalist criteria seem to trump artistry or historical importance every time.

Up next: 1941's Homeless Angels, which weaves military themes into the story in a much more subtle way.
Posted by matt at 2:05 AM

The films are all so full of aspects and nuances that are fascinating from a historical perspecitve. For instance, did you notice that all the characters have Korean names. Except for a few in HOMELESS ANGELS who have Western names (Baptized names, I guess). Whatever happened to the Japanese forcing Koreans to change their names?

The documentary accompanying HOMELESS ANGELS is really interesting, too. Turns out they barely got the film made because the Japanese authorities viewed it as way too "Korean." So the filmmaker tacked on some really random propaganda to the very end of the film that sticks out like a sore thumb.

Fascinating, too, to see parts of Seoul from the 1940s... especially scenes that take place in the country that have long since been absorbed by Seoul.

What is the quality of the prints? I'm trying to decide if this is something I should get my college library to buy. They don't seem to be available on Netflix, so I can't find out for myself without buying them.

Ahn Seok-young was the illustrator-writer behind the manmun manhwa columns that appeared in Chosun Ilbo in the early 1930, which were treated in a book that came out a few years ago. (I've done some blog notes on them.)

Still more interesting that Ahn was one of the founding members of KAPF (Korean Artists' Proletarian Federation), but his later life course was in no way unique among Korean artists.

Mark - I kind of assumed the shelter was somewhere around Banpo, or even further east. You can see across the river and it looks like Namsan and Bukhansan.

Erik - The prints are not bad. Some may fade in and out (bright/dark) and appear scratched, but it's easy enough to discern what's going on. Unlike 'Hurrah for Freedom', there were no missing parts of the films.

Antti - thanks for the info about Ahn Seok-young.

I am actually Ahn's grandson (on my mother's side) living in New York City and I just purchased this DVD set. I must agree wholeheartedly on your comments about the film. His first film is called "Story of Sim Chung" (1937) and I understand that about 10 minutes of it survived in Russia and now kept in Korean Film Archives.

I just cannot believe one of my grandfather's film is available like this, and I thank you again very much for your interest and your post.

I have just posted this on my blog as well: http://sjpflutist.blogspot.com/
Please check it out. I have mentioned yours on my blog.