'Tell me' the effect this will have... 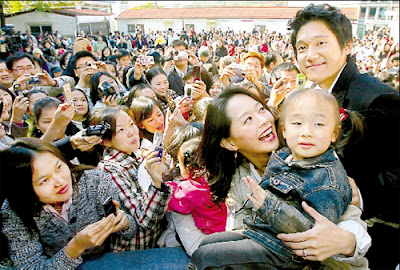 After it was suggested that a celebrity may have taken part in a sex tape, members of the public are having a hard time trusting actors and singers. Yesterday, the actors seen above were filmed with cell phone cameras and digital cameras to ensure that nothing inappropriate occured while they posed with a child. Both later broke down and admitted they had lied about their university degrees.

While many articles have appeared insinuating that others in the celebrity community are as guilty of such crimes as the singer who may have appeared in a sex video, it appears many young people haven't received the proper education. 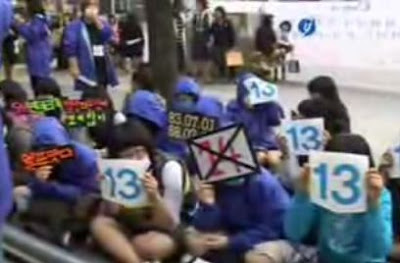 On Saturday, in an event that shocked the nation, hundreds of girls protested in front of S&M Entertainment demanding that boy band Superjunior date girls no older than 13 years old. After an agonizing debate, the group apparently gave into the protesters demands. After disappearing upstairs for 10 minutes, a number of girls left with what were said to be vouchers to Myeong-dong area stores in their possession.

An unnamed source at the Ministry of Information and Communication said that he was mystified as to how these pop stars could have behaved in such a way. He was also concerned about the behavior of the throngs of teenaged girls.

"We've done so much to discourage prostitution involving underaged girls," he said. He went on to describe the MIC's recent campaign, which involved concerts on university campuses* in an effort to counter the rising trend of men in their early twenties procuring underaged prostitutes. An advertising campaign also took place. 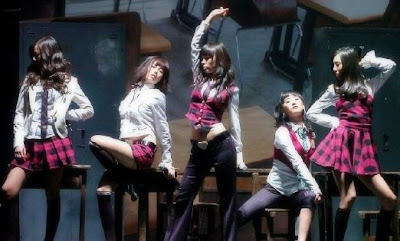 "They could be your daughters or younger sisters.
Do you really find such girls attractive?"
The spokesperson hinted that resignations within the ministry may occur within the next few days. "Many thought that using the Wondergirls in an ad campaign against teenage prostitution would be a good idea..." he said, his voice trailing off as a smile crept across his face.