Changing communication technology and its effects

There have been a few articles about changes in how communications technology is used in Korea (and the effects thereof) over the past few days. The first... oh, hold on. I just noticed the date - November 28, 2004 - and realized I found it in the "most read articles" part of the Chosun Ilbo's website, likely meaning that some popular website linked to it and made it temporarily popular again. Anyways, the article mentioned the decrease in popularity of email, and has some stats:

I was confused as to how Cyworld could have such explosive growth in the last year, but knowing that the Octobers mentioned above are 2003-2004, it all makes sense. Also It would seem SMS per month at SK went from 2.7 billion to 3.78 billion per month in the year ending in October 2004, averaging about 4.8 and then 6.8 messages per day per subscriber (keep in mind SK makes up about 50% of the cell phone market - more figures here). In June of 2005, it was announced that

Koreans send and receive some 370 million text messages a day, and assuming that an SMS costs W30 to send, the country spends over W10 billion (US$10 million) a day on sending text messages.

That worked out to 10 messages per day per subscriber. A link to an article in May of this year says that "According to a recent study, Korean teenagers aged between 15 and 19 send an average of 60.1 text messages a day." I doubt anyone who teaches kids that age would be surprised by that figure. 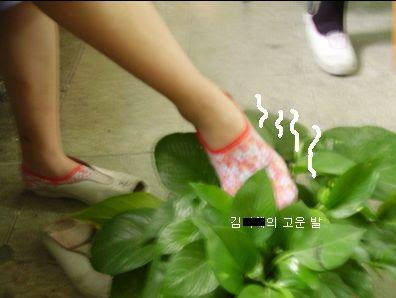 A few of them went for a more traditional style of affixing words to the photo: 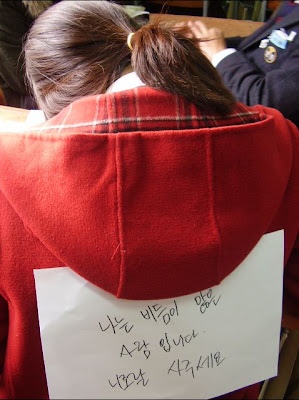 "I have a lot of dandruff - please buy me Nizorol"

Some kids' ideas of fun might not appeal to everyone, however: 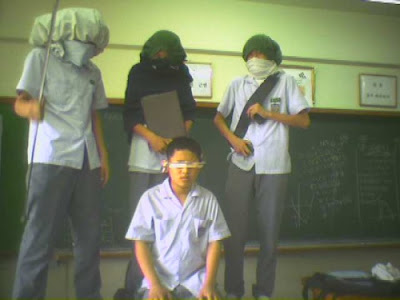 A parody of Kim Seon-il's beheading (from here).

Students have used their cameras to record other aspects of classroom life as well, such as beatings by teachers. Of course, the inclusion of cameras (and later video) in cell phones has had other effects as well. Combining the cameras with blogs led to the notoriety of these photos - 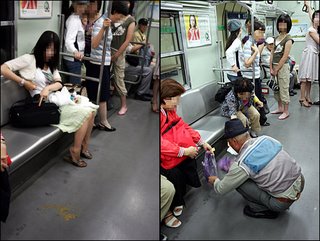 - showing that you can use cell phones (or their cameras) to enforce norms (or direct cyber-mobs), either intentionally, as in the dog poop girl incident (the poster likely hoped the girl would receive some sort of comeuppance, but certainly did not expect the overwhelming response, which forced her to drop out of university), or unintentionally, as in the case of the girl who took a photo of herself with a member of Superjunior and was hounded by their (rabid) fans.

They can also be used as a weapon to shame people by recording them being humiliated and beaten (a post for another day)... 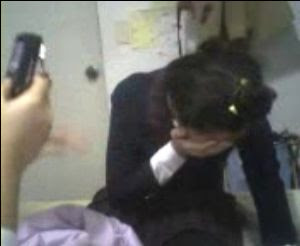 ...or used for political purposes, such as when you catch national assembly member groping a girl at a room salon... (also part of an unfinished post). 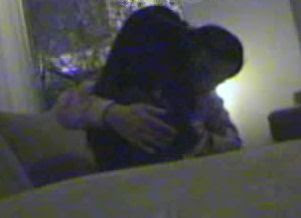 The Joongang Ilbo has a recent article on pay phones and their decline in Korea:

According to KT, the number of public phones in Korea has steadily declined from 515,787 units in 2001 to 217,748 as of last year, including some 110,000 at stand-alone booths and the rest inside convenience stores or other outlets. Total calling minutes diminished from 3.6 billion minutes in 2001 to 570 million minutes last year. Not surprisingly, the business has been in the red for the past six years with an operating loss of 50.7 billion won ($55 million) last year, which is expected to be 40 billion won this year. [...]

“A lot of pay phones out there do not make one single phone call throughout a whole month,” said one KT Linkers official. “But we can't just give the business up, since it is a basic public service like transportation and electricity. But there are not a whole lot of people who need it now.”

Lost Nomad links to a New York Times story about a rehabilitation center/boot camp for youth suffering from internet addiction.

Up to 30 percent of South Koreans under 18, or about 2.4 million people, are at risk of Internet addiction [...] They spend at least two hours a day online, usually playing games or chatting. Of those, up to a quarter million probably show signs of actual addiction, like an inability to stop themselves from using computers, rising levels of tolerance that drive them to seek ever longer sessions online, and withdrawal symptoms like anger and craving when prevented from logging on. [...]

To address the problem, the government has built a network of 140 Internet-addiction counseling centers, in addition to treatment programs at almost 100 hospitals and, most recently, the Internet Rescue camp, which started this summer.

One can only imagine the problem will get worse, considering the age at which kids are getting started using the internet. As this Chosun Ilbo article from August tells us,

According to the survey by the Ministry of Information and Communications and the National Internet Development Agency of Korea on Thursday, 51.6 percent of children between three and five are web surfers.

Lastly, Lost Nomad (again!) links to a Reuters article about the "death of the TV" in Korea, as more and more young people turn to the internet to find movies and TV shows, either to watch on their computers or to download to portable devices.

My least favourite development would have to be DMB phones - at least when their owners decide to watch TV on the subway without headphones...
Posted by matt at 2:40 AM