The Truth Commissions and the Silmido Incident

The New York Times has a story about Korea's truth commissions which is well worth reading (hat tip to the Metropolitician). I've covered different aspects of these commissions before, such as the (separate) investigations by the Defence Ministry and the National Intelligence Service into their respective pasts, the announcement that the Judiciary would do the same, the campaign to revoke medals earned due to taking part in the 12.12 coup and the Kwangu uprising, the outcome of that campaign and findings on the Nokhwa program which conscripted activists in the early 1980s, as well as some of the early findings on the Silmido incident. These commissions came up in the press this week as it was reported that the NIS commission had yet to announce findings on Kim Dae-jung's kidnapping in Tokyo in 1973, and that Kim was none too happy about this.

One of the events that I've been meaning to write about was the investigation into and retrial and acquital of those involved in the People's Revolutionary Party case from 1975 - one of these days I'll get to it. The other I realized I hadn't really finished was the Silmido case, and I was motivated to post on it due to some pictures that I found, which are below.

To start, Silmido is known for the film released 3 years ago based on events which culminated on August 23, 1971 (a good review is here). As is well known from the film, the South Korean military secretly trained commandos on Silmido, a small islet just southwest of what is now Incheon Airport. 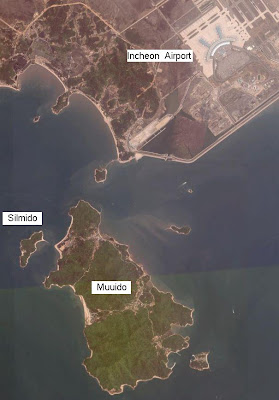 Silmido is comparable in size to the Incheon Airport terminal, and at low tide a land bridge exists between Silmido and Muuido (as seen in the film). In the photo below, the remains of some of the army buildings can be seen (a few photos of the the island can be found here): 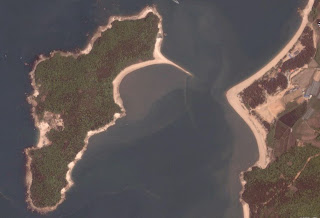 Silmido
When, in the summer of 2005, it was announced that the Silmido incident would be investigated by the Defense Ministry, they said, "the panel will attempt to identify the secret agents and uncover the process of their recruitment and where their bodies are buried." The investigation made the news when they began digging for bodies in November 2005 and March 2006, as well as when an interim report was issued in December 2005, and the final report in July 2006.

Agents trained on Silmi Island to infiltrate North Korea in 1968 and abandoned there before making a bloody escape were civilians, not soldiers or convicts as had previously been believed.

The Silmi Island unit was set up at President Park Chung-hee's order by the Agency of National Security Planning, the precursor of the National Intelligence Service, after a failed attempt by North Korean special forces to raid Cheong Wa Dae in early 1968. However, it was managed by the Air Force. The original plan was to draft prisoners under death sentence, but due to opposition from the Justice Ministry, which claimed an obligation to deliver bodies after execution, civilians were drafted instead, the panel concluded. Seven died during training, four of them beaten to death at the orders of superiors after attempting escape. The committee said the four escaped because they were “frustrated with beatings, killings and poor conditions in the unit and apparently wanted to alert authorities to their plight.”

The Korea Times reported at the same time that

Members of the Air Force’s [684] unit [...] were all normal civilians drafted into the military for financial rewards, not convicts as previously claimed, according to the panel.

Due to severe human rights abuses and harsh training during their service, the commandos went on a shooting spree in 1971 against their superiors, escaped the island and headed for Chong Wa Dae in a stolen bus. Most of them were gunned down or killed themselves by detonating grenades during a street battle with government forces. Four survivors were later executed

In November of 2005, attempts were made to find the bodies of those killed on August 23, 1971, as the Korea Times reports:

A team of military personnel and civilian experts on Tuesday began unearthing a site at a cemetery in Kyonggi Province, where the bodies of members of the so-called Silmido Unit are believed to have been secretly buried 34 years ago.

The excavation came as the military fact-fining committee, which pledged to shed light on the military’s wrongdoings under previous authoritarian governments, included the Silmido incident on its investigation list last September.

"We came here to console the souls of the victims after 34 years and also to soothe the minds of bereaved families," said Lee Ki-wook, vice chairman of the military panel, during a ceremony held ahead of the digging process.

In response, Kang Nak-young, 73, representative of the bereaved family members, said that he hoped the revengeful sprits buried there due to the nation’s irresponsibility would now find a peace.

Here are some photos of the family members holdings a memorial service in August 2004, after the movie was released (they didn't like the movie much).

The Chosun Ilbo reported further on this digging when reporting on the interim findings of the committee in December (dead link) :

The panel revealed that the bodies of 20 of the soldiers, who were officially reported to have died while escaping from Silmi Island west of Incheon, were hastily buried in a city cemetery in Byeokje, Gyeonggi Province without telling their families. Another 19 bodies believed to have been members of the unit were also recently found, and the panel commissioned DNA tests on them. 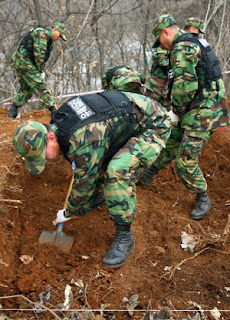 In March of 2006, the army began trying to find the bodies of the four survivors, as the photo above shows (from the Joongang Ilbo):

The four, all members of a secret South Korean military unit nearly four decades ago, were executed by firing squad in 1972 after a revolt and their bodies were not recovered. A team consisting of university researchers and an army search unit started digging to recover the remains, believed to be buried in hills in Seoul’s Guro district, the Defense Ministry said. The ministry said it has already traced the whereabouts of the remains after gathering testimony from former soldiers who claim to have moved the bodies to the hills during their service in the air force at the time.

The Korea Times also reported on this.

Seeing as the main goals of this investigative committee regarding the Silmido incident were to discover how they were recruited, who they were, and where they were buried, they seem to be accomplishing these modest goals, and have hopefully brought some peace to the family members of these men.

In the course of trying to figure out exactly where the final confrontation took place, I found something I hadn't expected to find - photos of that confrontation:

Here is the bus, presumably from a film still, looking like it hasn't been shot, though it's surrounded by police (rather different from all the shooting portrayed in the movie): 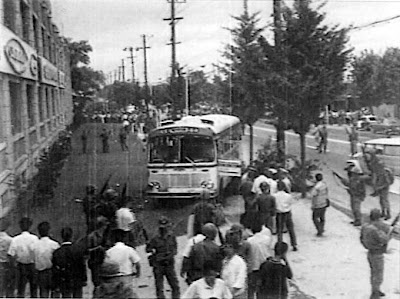 Here is a remarkable shot, obviously taken from a helicoper (you can see another on the roof): 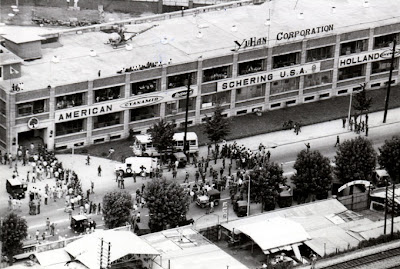 That building is the Yuhan Corporation building in Daebang-dong, on Noryangjin-ro. This map should give an idea of where it is: 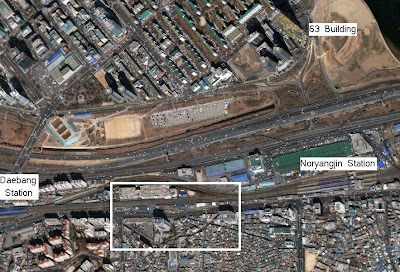 As you can see above, this is just south of Yeouido (in other words, they made it quite far, almost to the Hangang Bridge). They reason I'm certain of this is because the part of the map in the rectangle above matches the picture below, which is looking east: 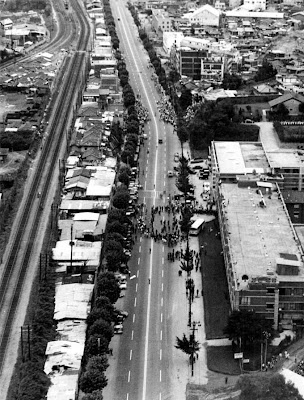 If we tilt the map to the east, we get a perfect match (other than the three, large new buildings). What surprised me was that the Yuhan Corporation building is still there (the upside-down 'L' shaped building): 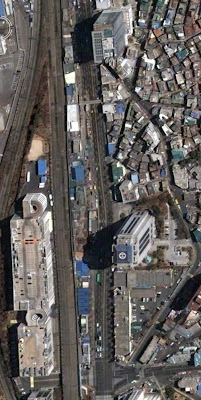 It was at this place most of the surviving soldiers took their lives using grenades. 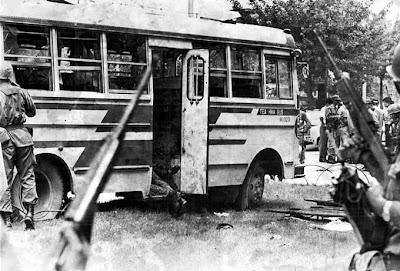 Needless to say I was shocked to find these photos, considering how the existence of unit 684 was denied by the government for so long. And as usual, actual photos prove to be quite different from what is shown in the movie adaptation...
Posted by matt at 2:20 AM

Thanks for your good work! It isn't easy to find non-Hangul sites about that fact.

Just saw Silmido movie. One of the best movies, not just Korean. Very raw and visceral given that it was based on a true story. But as the movie progressed, I kept wondering how much of it was true. I don't question the core story of the film ... but parts like the bus, all 31 were death row/life sentence convicts, etc.? Thank you for your post with pictures and news clippings ...

Thank u for the helpful information