A new way to protest redevelopment

The Joongang Ilbo had an interesting article yesterday titled "3 sickened by yogurt handed out to residents":

Police arrested a 32-year-old man last night who they said injected detergent into 60 containers of yogurt that he handed out to residents of a town in southern Seoul that will be redeveloped. Three people who ate the yogurt were briefly hospitalized and released this week for nausea and dizziness, police said yesterday.

Between two and four containers of yogurt were each unexpectedly delivered to about 30 households in the town on Tuesday, police said. The residents found a small hole in the containers, which they believed was caused by a needle, and reported it to police.

“I was angry because the residents there are going to make big money on the redevelopment project while my mother has to live on peddling fruit in an outdoor market,” police said the man told them. He is not employed. The man’s mother lives in a village adjacent to Munjeong 2-dong.

According to the Korean language article, the suspect, Mr. Seon, lives alone in Changshin-dong, (which itself is about to become redeveloped into a new town), while his mother works in Garak market, one stop north of Munjeong station. The Joongang's English article is a bit confusing, but the point is that his mother lives in a nearby area which won't be redeveloped.

The decision to make this move came back in May, 2005, though the previous September plans had been made to move merchants displaced by the Cheonggyecheon redevelopment to be moved to the same area. Obviously the plans were cancelled (really, could they have found a more remote place to try to move them to?). 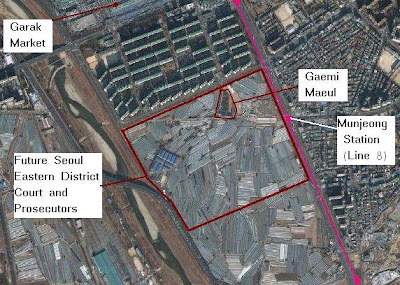 Munjeong-dong is several kilometers south of Olympic Park, and the map above shows the area to be redeveloped, the market where the man's mother lived, and the town to be redeveloped, known as 'Gaemi Maeul' ("ant village"). The article describes this village:

The town consists of 95 households in black vinyl homes near giant apartment complexes, police said. The residents, mostly the elderly and people with low incomes, moved there beginning in the late 1980s. 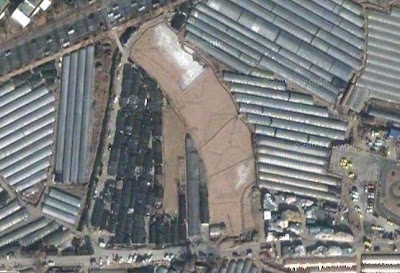 Above is a closer view of the village. To get a better view, this short video (a news clip) shows them briefly, while this post by Antti over at Hunjangûi karûch'im tells more about such 'vinyl houses' (converted greenhouses - notice that the village is surrounded by a field of greenhouses put to agriculture use). Antti also links to a lengthy report about the history of vinyl houses, which is well worth the taking the time to read. The name Gaemi Maeul (interesting translation here) is also used to refer to other, older (though not made of vinyl houses) neighbourhoods in Seoul, such as the ones pictured here (said to be from Geoyeo-dong and Hongje-dong) and here. The Gaemi Maeul mentioned in this article would seem to be the same one pictured above. The Joongang article continued:

“Although compensation for the residents has not been set, residents are expecting to receive money to move to other places or the right to live in low-rent apartments,” said an official at Munjeong 2-dong office.

I'm not sure how much policy has changed towards these communities since the report I linked to above was written (in 2002), but as of that time, despite most districts having rules to demolish such structures, Songpa-gu was the only district to allow people living in such communities to register their residence, which made it much more likely that they would receive compensation in the event of redevelopment. While those championing the right to affordable housing would cheer Songpa-gu's decision, the man who distributed the tainted yogurt obviously didn't feel the same way.
Posted by matt at 9:55 PM

Naver:
개미 마을 a colony of ragpickers
Rather than a "translation", this would suggest that the word "ant neighborhood" would have originally been used of ragpickers' settlements, and some quick browsing would suggest that it's been the case. (A Hankyoreh article on Kim Hye-gyeong of DLP, who "first participated in urban poverty movements in 1967 in the ragpickers' settlement Ant Village."

In Jo Jung-rae's Han'gang, the younger of the main protagonist brothers lives for a long period as a ragpicker, who in the novel lived in a settlement on the southern side of Namsan, but I can't recall any ants in the name of their neighborhood.

About Changshin-dong, the Korean blogger (painter, university teacher, urban phoographer) Nardoldol has a bunch of pics taken in the area. You've perhaps seen me referring to his blog, but let me recommend his place (http://nardoldol.egloos.com/), especially as you also pay a lot of attention to the urban change.

So in other words the meaning of the word has shifted over time? Interesting stuff. And thanks for the link to Nardoldol's site - there are some great photos there.

I'm not sure of course, but it would appear as if "ant village" was first used of a ragpicker's neighborhood.

Doesn't the analogy to ants make good sense? For humans, ants seem to be ceaselessly going around, gathering stuff like pine needles and bringing them back to the nest; similarly, ragpickers gathered all kinds of reusable things, brought them to their living quarters, sorted it out and sold further.

(Jo described in the novel how ragpickers also took care of circulating cow bones from slaughterhouses and butcher's shops to whatever was made of them.)

Here's a Hankyoreh article on ragpickers in Nanjido, where the Seoul dump used to be. The interviewee says he made as much as 1.5-2 million won (!) a month in the 1980s by gathering, sorting, and selling garbage. There's no word of "ant village", but he tells having worked "diligently like an ant."