Cracking down on 'personal' parts of the city

Once again, street vendors are being targeted for removal by the city government:

[T]he Seoul Metropolitan Government on Tuesday announced plans to get illegal street vending under control. Unlike snack booths and shoe-shine booths that the city legitimized beginning in the 1980s, street vendors are operating illegally, according to laws governing the use of roads. Currently, there are about 12,000 street vendors in the city, down from 1989 when there were 20,305, the city said.

Under a new plan, 25 district offices in the city would designate an area where street vendors could operate in uniformly designed booths.[...] For vendors who want to change their occupation, the city said it will offer free vocational training and loans of up to 50 million won ($53,130) to start a new business.

Another Joongang Ilbo article from August, 2006, which has profiles of different stalls and the food they serve tells us more:

As much as street stalls are a part of life in Seoul, the city has tried several times to make its streets vendor-free. In the most recent major push, the Seoul city government, as part of its city beautification plan, planned to ban the sale of food out of street carts in the city right before the 2002 World Cup games. In response, the vendors banded together in protest and the government backed down.

Also worth mentioning is that the government also tried to ban street stalls before the 1988 Olympics and the 2000 Asia-Europe Meeting (ASEM). Also, the plan to offer loans and training to the vendors are the latest variation on a theme. During the crackdown before the 2002 World Cup, "plans were in the making to have poor street vendors employed in public works projects." The city provides some information about the numbers of street vendors over the past few years:

The article also talks about a pilot project in Yeoksam-dong providing a commercial building to accommodate street stalls. The Korea Times elaborated on the new 'vendor areas', saying that the city of Seoul would "create special zones for street vendors in many districts of the city so that they can become tourist attractions," while the Korea Herald added that "vendor zones will be formed in designated areas around Bosingak in Jongno and Myeong-dong as early as October." The above was from a Herald editorial which was pretty clear in its point of view:

It comes as a great relief, therefore, that the city government is finally going to do something about the sidewalk vendors that have become a growing nuisance. There are more than 11,000 street vendors of various types, from pojangmacha selling alcohol, to old women squatting near markets selling beans, according to the city's estimate.

Korean street food is a virtual smorgasbord of different treats, and most "pojangmacha" (vendors) sell them at a very reasonable cost.

The Joongang Ilbo has had several articles about the vendors, such as this January, 2007 one about the effect of the new bus lanes on the stall owners, and another from a few weeks ago (perhaps to get the public in the right mood to support the crackdown) relating that "47 percent of street vendors said they own a house and 4 percent said they have two houses." It's not until a few paragraphs later that we're told that, "The survey covered 3,625 street snack booths and shoe-shine booths," such stalls having been legalized by the government, and thus being quite different from the illegal stalls which are being targeted by the city. 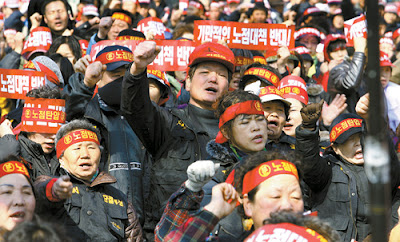 The vendors aren't happy about the city's plans, of course, as the above photo of a protest in Daehangno from a few days ago shows. If you were thinking most of the people in the photo were female, then this article might interest you:

5.44 million women _ 54.9 percent of the 9.9 million working females in Korea _ were engaged in jobs with poor security such as day labor, part-time jobs and unpaid family work.

The number of the self-employed women, often classified as employers or independent workers, last month totaled 1.51 million, the NSO said. Most self-employed women were peddlers running street stalls without any employees, it added.

Of course, it's not just the vendors in stalls on the streets who are getting screwed over by the city government. Perhaps you remember the merchants who lined Cheonggyecheon prior to its redevelopment, many of whom were moved into Dongdaemun stadium? Well, the city is planning on building a new park, you see, and...

the city will start tearing down the 80-year-old Tongdaemun Stadium, whose grounds are now used as a venue for street venders, and the neighboring baseball stadium in November next year to build the urban park.

The vendors have strongly opposed the government’s plan saying that they cannot lose their work places for a second time. The vendors were forced to move to the grounds of the stadium from the Chonggyechon area due to the Chonggyechon stream restoration project in 2003. About 3,000 shoppers visit 894 shops on the grounds of the stadium on a daily basis.

However, Seoul Mayor Oh Se-hoon has said that although he will do his best to negotiate with the vendors, it will be hard to accept the demands since business by street vendors is illegal.

Wouldn't the city allowing illegal activity to take place in a public facility like a stadium also be problematic, then? Or was the moving of the vendors into Dongdaemun stadium just a way to deflect criticism and bad publicity while the stream was being redeveloped, with the full intention of turfing them out onto the street later (in the midst of a crackdown on street stalls)?

Another Korea Times article tells us that more vendors could be on the chopping block:

Namdaemun Market, Seoul’s oldest and largest retail center, is set for a facelift, municipal authorities said Monday. Urban planners will also redevelop the area around Nakwon Sangga in Chongno, one of the city’s oldest shopping malls, to give the aging building a new look.

"By redeveloping the old markets, as with the Seun Electronics Mall and the outdoor markets in Tongdaemun, we will be able to improve the competitiveness of downtown shopping outlets and make them more attractive to foreign tourists," an official at the Seoul Metropolitan Government said.

I've talked about the Seun Sangga redevelopment plans before, but now it seems the city government is not only targeting it and the Hwanghak-dong market, but also the remains of the Cheonggyecheon market now at Dongdaemun stadium ("we're baa-aack"), and now the Nakwon Sangga and even Namdaemun. Oh, and the street vendors, too, lest we forget.

We're told why this is, though:


“The street vendor situation in Seoul is still at a standstill at the moment. Although many citizens see the vendors as a nostalgic or personal part of the city, they need to be removed in order for the city to grow,” said Yu Sei-jong, an official at the vendor maintenance division of the Seoul Metropolitan Government.

Yes, you should try to stamp out that "personal" part of the city, it gets in the way of all the facts and figures about investment and tourism and the kickbacks from the construction companies. But there are other reasons the city should reconsider their plans. Allow me to show the photo from the top of this post again, of pojang machas near my house:

Below is a shot of them (barely visible) taken from behind, with the background buildings seen in full: 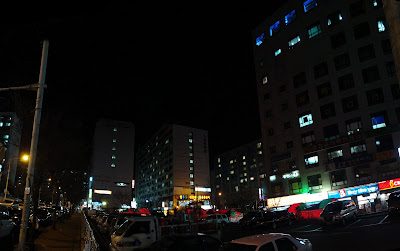 If it wasn't for the pojang machas and street stalls, we'd have to stare at the lego-block architecture that makes up so much of Seoul's landscape. Why the city would want to wish that on anyone is beyond me.
Posted by matt at 3:44 AM

Interesting article, as always. I am rather ambivalent about the whole thing. On one hand, I quite like pojang macha... On the other hand, there are many areas in the city where the street vendors are a nuisance... crowding sidewalks and public areas, creating sanitation problems and whatnot.

Also, why should any vendor get a free spot to set up shop? I am guessing that most PJMC vendors pay monthly dues to local police and gangsters for their spots, but not formal licenses... but that is mostly a guess.

A lot of government people are clearly just embarrassed by that part of Korean culture and would just like to see it go away. Hence the stupid idea to put PJMC into buildings. The convenience of their locations is one of the PJMC's biggest draws.

Anyhow, point being, PJMC can be really good. But some sort of clean-up and formalization of their status is necessary, for safety, organization, etc. As usual, however, the Seoul government seems to be doing its best to give us the worst of both worlds.

Excellent piece.
Moving the street vendors to a permanent building really is not going to work. Round Yeouido where would they put it?

The appeal of these places (I assume, since I've never eaten at on) is that they are there: in the evening; on the way home from work; where you can get quick cheap food. If they are moved elsewhere costs will go up and they would be less convienient.

I would love to see a 'speeded up' video of the street when they setup and take down their stalls. They appear like magic, and then are gone in the morning!

The PJMC is part of Korean Culture, some aren't too flash, but as you know many are extremely good. These things need to stay, trash the trashy homegrown dramas and pop music first, this is one aspect of Korean popular culture which needs to stay. The fact that they stay open after the pubs kick
you out at 3.00am is reason enough.

Thank you for a great post, Matt. I could not agree with you more. I think Korean urban planners would do well to read Jane Jacobs.

The second Joongang Ilbo article regarding street vendors I found quite egregious. Who would begrudge street vendors owning a home, especially when their stated rate of home ownership lags behind the nation's average? Further, these are "officially sanctioned" vendors, the product of a public policy that provides the state revenue, while promoting the welfare of members of disadvantaged groups. But as you write, the supposed targets of the crackdown are non-sanctioned vendors.

Korean urban planning has taken some of the worst of what has not worked in the U.S., but remains unsatisfied.