The Continuing Reactions to the Yeosu Fire 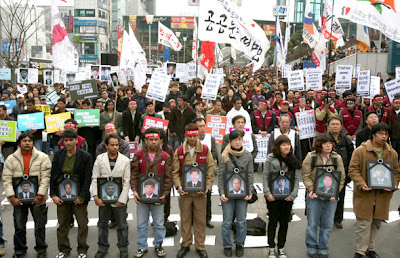 I've already written one update about the Yeosu immigration center fire which left 9 migrant workers dead and 18 injured. Here begins another, because, as I anticipated, there has been a lot of ink spilled on this topic over the past two weeks.

To start off, for a background on the migration of foreign workers here, an essay titled "Past and Present of Foreign Workers in Korea 1987-2000" can be downloaded here.

The Migrant Trade Union and others released a statement on February 11, the day of the fire, titled "How Many More Times," which can be read here. A petition related to the fire can be found here.

Different newspapers have covered the tragedy and response to it in varying ways. The Joongang Ilbo had an article titled "Fire might have been a planned escape" on February 14, but more interesting are a February 16 letter to the editor( "Tragedy at Yeosu should shame Korea") by a student at Ewha Girl’s Foreign Language High School, and a February 26 opinion piece titled "Korea needs to start welcoming immigrants", by Gouranga Gopal Das, a professor of economics at Hanyang University.

Eight migrant worker organizations held a press conference yesterday[feb 23] at the Press Center and demanded that the cause of the recent deadly fire at the customs and immigration office in Yeosu be established. They also asked that such facilities be abolished.

In a joint statement the organizations said, “This problem transcends the issue of those killed in the Yeosu fire, it is the problem of 200,000 unregistered immigrants. We are anxious that this might happen again.”

The statement continued, “Migrant workers work assiduously for the development of the Korean economy, but we are treated like animals, not humans.”

The statement further read, “Three years is too short a period in order to pay off the debts we made to come to Korea and save. The Korean government needs to accept that it cannot rely on deportations and regulations to solve the migrant worker problem. Migrant workers are not like batteries; you can’t just throw them out when you’re done with them.”

It's nice to see that them getting their message out - the above statement certainly cuts right to the heart of the matter. This press conference was also covered by the Hankyoreh.

The anger of migrant workers toward Koreans, who treat them with contempt, has grown. In some areas, migrant workers from Vietnam stage strikes. There have been moves to form labor unions.

Many deportees have become hard-line anti-Korea activists. A few years ago, Nepalese workers who had been in Korea distributed 12-page calendars containing photographs of those forced to return home after being injured or beaten while working in Korea, to make these atrocities known throughout the world.

I guess we shouldn't surprised that the Herald, which seemingly ranks 'business' news more important than 'national' news on its webpage, should consider strikes and unions to be 'anti-Korean'. Despite this nitpicking, by doing this series, they've managed to set themselves above many of the other English language newspapers here in their 'Yeosu fire fallout' coverage. Another Herald article from Febrary 23 relates that

Over 109,000 foreign workers from 15 countries including Bangladesh, Nepal and Myanmar will be able to come to Korea through a legal employment process this year, the Labor Ministry said yesterday. Among the total number of migrant workers this year, 60,000 are overseas Koreans. Last year, 105,000 migrant workers came to Korea from 10 countries including the Philippines, Pakistan, Mongolia, Vietnam, Indonesia, Thailand and China.

Human rights groups representing migrant workers have been asserting that the government should stop accepting more foreign workers, but legalize the workers that are currently here illegally.

The Herald has another good article I'll get to later. The Korea Times' coverage has been quite poor, other than a February 14 opinion article titled "Illegal Aliens: Tragic Fire Forces Review of Policy on Imported Labor":

Police suspect the fire at Yosu Detention Center was caused by one of the foreign inmates in an attempt to escape, who was killed in the accident. If this proves true, it leads to the question: What could have driven him to such desperation to get out of the state facility? [...]

In many cases, the only reason these illegal aliens outstay their welcome is that they didn't make enough money to pay debts to brokers who sent them here. The so-called industrial training system has been changed to a work permit scheme, but nothing has changed fundamentally except for the operators. Three years is still too short a time for most immigrant workers to pay back debts and return home. Re-entry into Korea is very difficult, so many become illegal aliens.

Other than this, we're given another article the same day titled "Vision-Impaired Pastor Fathers, Feeds Culture to Hundreds of Migrant Workers", a paternalistic story of a pastor working with Mongolian migrant workers in Guro-gu who sees the present situation of migrant workers as fine, and the Yeosu fire as an aberration, speaking of "the fight religious organizations and social groups carried out years ago" to help the migrants. Another article the next day titled "Migrant Workers Enjoy Their ‘Sollal’" is essentially the same story, from the migrants' point of view.

The Donga Ilbo, which has the least amount of English coverage to begin with, has had only one article on this topic, but at least its February 17 article, "Migrant Workers Help Less Fortunate Koreans" turns the paternalistic assumptions of the Korea Times articles on their heads:

Axmon Community Service (ACS) is made up of 20 foreign workers from Bangladesh. The workers, who came to Korea in search of the Korean dream, spend most of the day at a factory and spend the rest of their time in a tiny room. However, they take a very special trip on the fourth Sunday of every month. Their destination is a mentally handicapped care facility where they have been volunteering for the past five years.

The article tells their story, which involves one of them having been deported after a random passport check by police on the street.

Yu Seong-hwan, an official at the Ansan Migrants' Center, stressed, "Illegal migrant workers who have settled in the nation speak Korean fluently, and are very skillful. To small companies, they are precious employees, as these firms suffer from a shortage of manpower," adding that if the nation deports them and instead brings in workers who cannot speak Korean, the economy will receive a serious loss.

A February 16 article tells us that "Foreign laborers working illegally in South Korea suffer from intestinal ailments at twice the rate of their legal foreign counterparts", while perhaps the article most worth reading for its clear look at the issues involved is a February 22 column by Park No-ja titled "Why does Korea refuse to accept immigrants?":

In 2005, Spain decided to give 700,000 "illegal aliens" legal status, after they proved they had lived in the country six months or more, had contracts for at least six months, and had no criminal record. A considerable number of the 190,000 foreign workers in Korea with "illegal status" are believed to want to work in the country long-term or live here permanently. If the government were to give them amnesty and legal status with eventual eligibility for naturalization, it would accomplish many things at the same time: contributing to the making of a multiethnic society, reducing the rights violations that stem from being "illegals," and helping an economy in need of workers. [...]

The tragedy in Yeosu demonstrates the bankruptcy of an immigration policy that only focuses on rounding people up. 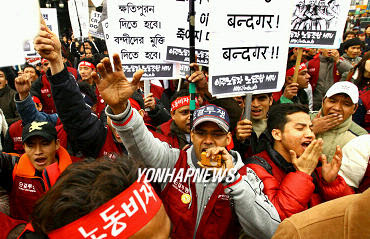 On Sunday, February 25, a protest was held at Seoul Station calling for the government to admit responsibility for the Yeosu fire, and to call for changes to the way the government treats migrant workers. This image search over at Naver has about 5 pages of links to some 50 news photos of the event, while Ohmynews has a short video overview of the protest (which includes a performance by Yeon Yeong-seok, whose music can be found and downloaded here). A longer set of videos of the protest can be found here and here. As for English coverage, the Joongang Ilbo and Hankyoreh's (at the top of this post) were limited to photos, while the Korea Herald had a good, lengthy article about the protest titled "Migrant workers take to the streets":

According to the secretary of the Migrant Trade Workers Union, Masun, who organized the rally, "most of these men had been in this facility [at Yeosu] for longer than six months." He went on to say that one of the dead workers "had been at this lockup facility for almost a year, waiting not for the deportation that would inevitably come, but for wages owed to him, that once paid, would have allowed his journey back to his homeland and his two children."

He was not the only one with wages owed. "One of the only reasons why a worker would be in this facility for a prolonged period of time would be because they were owed wages or compensation for an industrial accident," Masun said.

Some of the speakers at the rally asked, "How can a country so obviously in need of workers put a three-year cap on migrant visas, especially when broker's fees for these jobs can sometimes take more than three years to pay off?"

"Why are migrant workers who have contributed so substantially to the success of this country treated like they are criminals when their only crime is to continue to work and be productive members of society?"

One speaker asked a question that received a loud response from the demonstrators. "What are they going to do about the real criminals involved in this, the companies that refused to compensate these workers for the dangerous jobs they did, the guards that did not open the jail cells as these men were burning to death?"

I hope that for once the spotlight on these questions that Yeosu has caused will help bring about some sort of positive change, instead of such concerns being quietly swept under the carpet and responded to with the resignation of some sacrificial lamb in the government, as is the usual case.

(Crossposted at Two Koreas)
Posted by matt at 1:08 AM

yeah, bring all those Muslims in, and let's make Korea just like Europe, with all the race riots and racial conflicts. Meanwhile, you have 20 million starving North Koreans across the border that will need jobs once the unification happens.

I visited the Seoul Immigration website today. The site produces a "pop up" window containing an apology for the fire and deaths.

Thanks for pointing that out, dogbert.