I found this video the other day, consisting of three news reports (by ABC, CBS and NBC) about the Kwangju Uprising broadcast on May 22, 1980. That was the day after the military retreated from the city and the citizen army controlled the streets. From googling around, the source of these videos may be the Vanderbilt University Television News Archive.

Before I review what was said and shown in the broadcasts, it's worth noting where the footage came from. Footage exists from throughout the uprising, filmed most likely by either the Korean press or possibly by the military itself, (or by reporters the military approved, considering how close to the action the camera often is). Below is a still of the paratroopers on either May 18 or possibly May 19. 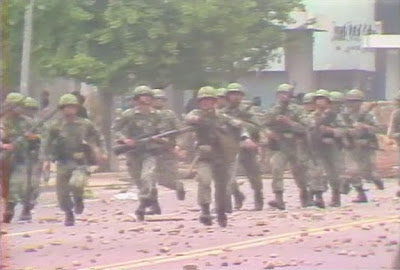 Here is a still from the night of May 20, when the taxi and bus drivers led a demonstration (and with their ability to occupy the streets, began to turn the tables on the paratroopers and give the citizens the upper hand). 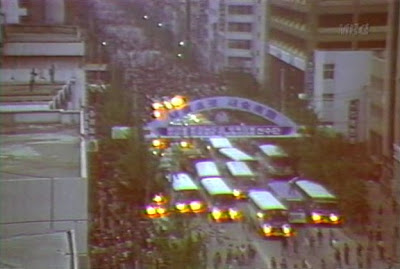 The footage in the American news reports above was not taken from these sources, however, but instead came from the German photographer Jurgen Hinzpeter, who made two trips to Kwangju during the uprising, filming his first footage on May 21 and 22, and returning for the final days and suppression of the uprising. The footage from May 21 and 22 is what we see in the clips above. Hinzpeter would later be severely beaten by plainclothes police in 1986 while covering a rally, possibly in revenge for the footage he filmed in Kwangju. His injuries ended his career. He is pictured below a few years ago in the gymnasium across from the provincial hall in Kwangju. 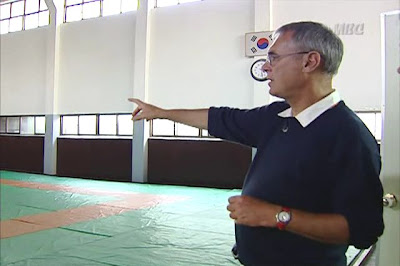 It was there that he shot the footage captured below of the coffins laid out back in 1980. 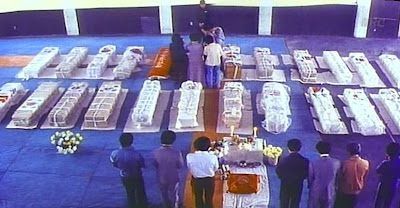 To go over some of what's seen in the clips above, ABC begins by saying that a "small war" had been fought in Kwangju and sets the tone by describing protesters as "militant anti-government groups". What follows is a second-hand description of events set to Hinzpeter's footage, as the correspondent is reporting from Seoul. It describes the protesters' demands ("An end to martial law and freedom for the opposition party members who come from this region") and their desire that the military "admit[...] the troops used harsh tactics during the riots". It should be pointed out that it uses file footage of police beatings which is not from Kwangju to illustrate these harsh tactics. As for casualties, we're told that there are "61 dead, almost all of them civilians". It also brings up the US government response, and its warning to North Korea, but then the US warning aimed at North korea is brought up by all three networks.

CBS tells us that "After four days of fighting, armed rebels appear firmly in control now of the South Korean provincial capital of Kwangju and the area around it." It provides quite a bit more context by mentioning that the military had taken over the government and declared martial law and that the protesters were "opposing the generals who seized power last weekend". It gives some graphic descriptions of the wounds of the victims, saying that "many of the dead are civilians, either shot in the face at close range or bayoneted." It also seems much more balanced, portraying the protesters in a more positive light, saying that the army was outnumbered and forced out, "Leaving the city to its citizens." The reporter also speaks of being "applauded and cheered by the crowds," and that the commandeered vehicles "carry the south Korean flag, for these people consider themselves patriots, opposing the generals who seized power last weekend". Describing the spread of the uprising, we're told that "demonstrators from Kwangju were cheered as they sought support in farming villages". The reason for the CBS correspondent's more favourable view of the demonstrators is likely due to the fact that he was actually in Kwangju, unlike the other correspondents.

NBC's segment is almost twice as long as the others, and is the only one to show hospital footage, describing the victims as "shot or bayoneted". And yet it starts out saying that "five straight days of anti-government violence" had taken place. Shouldn't that be government violence? It also sounds like the military was the main source of information, what with the description of "citizens wounded evidently at random by other citizens". The military used this as a partial excuse for the casualties in press releases after the uprising. The segment also does its best to emphasize that Kwangju was chaotic (which, especially on the 21st and perhaps early on the 22nd it was, but this report paints a more ominous picture), telling us that "Armed young men, under no apparent organization, rule the streets. They are unchallenged." Or that "The soldiers are outnumbered", while a burning jeep is shown. We're also told that "All of this stems from anti-government feelings and resentment against the discrimination this province always has suffered". While there is a certain aspect of this that is true, no mention is made of the government being taken over by the military, or the military's brutal behaviour as a cause for the uprising (though we're later told that troops in Kwangju had "opened fire on civilians, killing several"). The 'regionalism' of Jeolla-do people (and their willingness to believe "malicious rumors" about Kyongsang-do soldiers coming to kill them) was also blamed by the government for the uprising early on, again making it seem likely that the military was depended on as a main source for this segment. Adding more weight to this is the footage of army preparations to re-invade the city. The selective choice of a single scared citizen to explain how dangerous it was in the city due to the citizen army is also rather telling, considering the number of people who could have told stories about army brutality. Keep in mind that the correspondent is "near Kwangju", and not in the city, and seems to be keeping company with the military surrounding the city. The main idea this piece communicates is that the the city is in chaos, the citizens are armed, dangerous and out of control, and the army (rightfully, due to such chaos) is preparing to 'restore order'.

It also refers to the relation of the US government to the events in Kwangju, telling us that "The pentagon said it had given South Korean commanders permission to withdraw some Korean soldiers from the joint Korean American command and use them to help control the cities." Interesting. Then-ambassador Gleysteen wrote that in the late 1980s he had been set straight by the pentagon regarding US control over Korean troops, saying that the US did not have to approve the removal of Korean troops from joint command. Obviously either the US press didn't get the memo at the time, or this interpretation evolved later. It ends by mentioning that US officials thought that "Military hardliners are seizing on the political turmoil to halt progress towards democratic reforms", and that a meeting was being held (on May 22) to see how the US could "help restore civilian rule and revive the process of political liberalization."

While we're on the topic of contemporary reports about the Kwangju Uprising, there are a few Time Magazine articles available online [not anymore, unfortunately]:

One of the first essays written about the Kwangju Uprising in English is "The Kwangju Uprising: An Inside View", by Tim Warnberg, from Korean Studies, v.11, 1987. Warnberg was a peace corps volunteer who witnessed the Kwangju Uprising, and his essay is well written and well worth reading. It can be downloaded here (The download 'button' is at bottom left, you have to wait 12 seconds). If the scanned pages are viewed at full size they are quite readable.

There are also other videos on youtube about the Kwangju Uprising, some which may be worth watching, and others that are just plain irresponsible (mixing documentary footage with footage from Jang Sun-woo's A Petal?).

Speaking of A Petal, that film is not available on dvd commercially, though one does exist here, for those who use bittorrent (hey, I'll be the first to buy it when it become's commercially available, but until then, I'm happy to have a copy (and a good copy at that, with subtitles in several languages)).

There have been several movies which deal with the uprising to some extent (most recently The Old Garden), but a movie titled "Hwaryeohan Hyuga" (Splendid Holiday - the code name of the paratrooper operation which set off the uprising), about a character who joins the citizen army, is in production (who knew the difficulty involved in re-importing 1980 era Hyundai Ponys from Egypt to use as props?). The cast list is lead by Kim Seong-kyeong (Turning Gate) and Ahn Seong-gi (Duelist). It also co-stars Lee Joon-gi (The King And The Clown), Lee Yo-won (Take Care Of My Cat), Song Jae-ho (Memories Of Murder), Nam Moon-hee (Crying Fist), Cha In-pyo (Iron Fist) and Park Cheol-min (A Petal). Footage of a scene being shot in the same gymnasium where Jurgen Hinzpeter shot his footage can be found here.

Anyone wanting more links and information about the uprising can find more in some of my previous posts on the subject.
Posted by matt at 3:13 AM

Thanks so much for this post. I just saw A Petal last night, and Peppermint Candy last week. I've been digging up stuff online off and on all day, and now this.

Matt, the link to Vanderbilt University Television News Archive is broken: "http://www2.blogger.com/%20" is extra there.
Otherwise, thanks for some good info once again.

is the person reporting from Kwangju for CBS the very Bruce Cummings of 'Origins of the Korean War' fame?

hi we are reposting this entry and other Kwangju related blog articles, we hope it okay with you, thanks..

Many thanks for this post. I'm writing a novel about a young American who gets emotionally tied up with what's going on in Korea, so it's great to find telecasts I can have her watch. Carol
caroldussere.com