Japan Focus has a good article about migrant labour in Korea and the Yeosu fire, while the Korea times tells us that the Korean government will help migrants get unpaid wages before deporting them, while also adopting the "International Organization for Migration ['s] Assisted Voluntary Return scheme" which helps migrant workers who have overstayed go home. So far it seems the Yeosu tragedy has led only to the government putting a 'kinder, gentler' bandaid on their current policies in the hope of deflecting criticism.

Jon over at I'm a Seoul Man has several photos of the Incheon Airport train line construction, which I've mentioned before (here and here).

Also, for awhile the amazing panoramic photos over at flyingcity.org weren't available, but they've returned, and they're well worth checking out (Be sure to click on the photos on this page to see the huge, full sized photos). 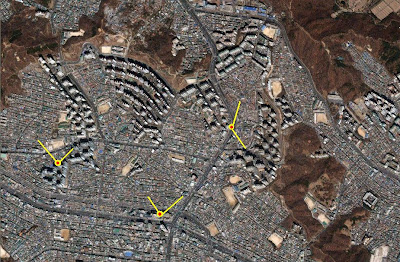 The photos below are ordered from left to right on the map above. They do overlap, especially the second and third photos. A set of buildings at the far right of the second photo are at the far left of the third.

As I said, the size of the photos above pales in comparison to the originals - go see them now!
Posted by matt at 3:23 AM