Kim Yu-na at the World Championships 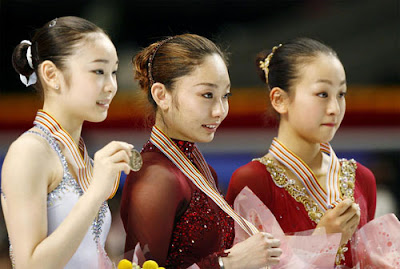 Kim Yu-na, Miki Ando, and Mao Asada at the World Championships
When exactly was it that Kim Yeon-a's name became romanized as Yu-na? I was thinking that it must be odd to have your name mispronounced regularly, but then remembered that people mispronounce my name (if they call me Matthew) here all the time; I'm sure she's just as used to it (as she must be used to strange things like seeing her treatment for a herniated disk documented on the internet). Since I don't watch tv I had to watch her performance at the world championships on youtube after the fact. Her short program was awarded a record high score and won her admiration from many foreign commentators:

She didn't do so well on the long program, however. Mao Asada came in second (performances here and here), while Miki Ando came in first (performances here and here). It was nice to see Asada do so well in the long program, as she is extremely talented, and it was rather painful to see her abort a few jumps at the World Junior Championships last year because they were apparently too difficult. Of course, when I mentioned this to some of my middle school students, they just shook their heads and said, "But Japan won." It sort of feels like the love and support the Korean team got after losing to Switzerland in the World Cup. I mean, why is it that almost every photo in this gallery is of her falls? Talk about being supportive. And who the hell thought this was a flattering photo? Unlike the other English language dailies, the Donga Ilbo at least focussed on her short program in this interview with her. For the students who complained about 'Japan' winning, maybe they need to get into the spirit of this selka ("self-camera") photo, titled, "we are rivals and friends". 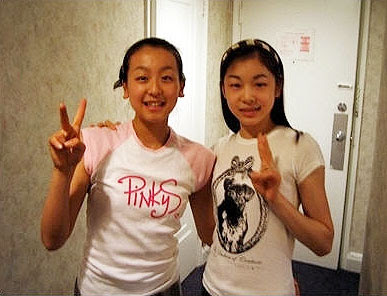 I know I've said it before, but both Korea and Japan could use a little more of this attitude at the national level.


For more posts on Kim Yuna have a look here.
Posted by matt at 3:32 AM

At least, out of the three, Kim has the best skin complexion.

I imagined she (or those representing her) would have the final say, but forgot that her website is yunakim.com, and now that I check, her name is listed as Yu-na as far back at the 2005 World Junior Championships.

The first article I read about her back in 2005 would have used Yeon-a (but I can't find it) and that's how I imagined it should be romanized under the new system, though wikipedia says it should be Yeon-ah - I wasn't aware of the need for an 'h'. At any rate, the only thing off about Yu-na is that it leads to the mispronunciation of her name, but she's obviously fine with that.

As for Korean newspapers, other than the Joongang Ilbo, which has used Yu-na since 2005, the others have apparently romanized it however they liked and have taken their time conforming to the way she has chosen to romanize it. Only a month ago the Donga Ilbo was using Yeon-ah, but in their recent interview with her they switched to Yu-na. I guess when the LA Times raves about 'Yu-na', the Donga Ilbo had better follow suit.

Gim Yeon ah does have the vampire teeth here.

Hmmm...sounds like you are currently in Korea. Then I think you'll soon notice 'Busan vs Pusan', 'Lee vs Rhee', and so on. It's just the problem of (1) translating korean letters exactly to alphabet or (2) alter a little during translating in order to achieve more exact pronunciation of foreigners. In my opinion I'd go with 'yunna' because I don't like hyphens and it's easier to remember this way, if I were her. You are right, with (1) method it should be 'yun-a or yun-ah.' To me 'yun' and 'yeon' are almost the same.
I loved her short program enormously, it was the most beautiful Tango I have ever seen and also one of the best of women's programs...I like Asada Mao too, and she did well on the second part (the longer one) and she is very skillful at jumps, too. I like to watch both yuna and mao-they've got so contrasting characteristics and styles. Mao's cute and childlike bright, but Yuna is quieter and deep?! (Mature is closer to what I wanna say) But I'd vote for Yuna's performance being more attractive, moving:)

Just out of curiosity, are you a Japan lover?:) (I guessed from the cherry blossam pic on the header.)
Well, I respect your own point of view and also personal interests/favorites, but you might be unable to take correct, real objective attitude on Korea if you are heavily pre-influenced by Japanese stuffs.
I agree that 'gusts of popular feeling' is irrational and also sometimes too strong there, but after spending a long time in overseas I kind a begin to understand. (Interestingly, I have noticed a lot of commonness btw Korea and Italy. I heard that Valkan peninsula is very alike, too. It'd be interesting to explore further if you are a professional writer or something in that line:)) A Korean living in US.

There are cherry blossoms in Korea, and they're rather popular here too. That photo was taken 100 meters from my house (they're out right now, once again, but will be gone soon).

I can't say I 'love' any country, though I like Japanese movies, animation, and food. Korea's been my home for quite awhile, though. You might want to read some of the other things I've written here, like this , before deciding where you think I stand.

Yu-Na Kim must be the most lovely young lady in the world. Bravo!!

kim yuna is the BEST!! Go korea! recently she got like a 78!! She is the figure skating GENIUS!!