Yonhap: "It's regretful that English education is entrusted to marijuana smoking native speakers"

As I mentioned in Monday's look at the recent marijuana busts (which a commenter said took place a month ago), Yonhap - which broke the story at 9am Friday - was obviously having a slow news day. They published a translation at 10:23 and then published an editorial at 3pm. Needless to say, the editorial did not focus on the children of the rich or leaders of society, and left out any discussion of the possibility that the hagwon instructors arrested may have been on F-4 visas, though that's par for the course.

Korean society as well is not presently an area safe from drugs. On the 14th, the Korea Customs Service revealed that the smuggling of drugs into the country is increasing. While the drug problem is not serious compared to other countries, our country, which is classified as a drug-free nation, is being used as a drug smuggling relay base by international criminal organizations. It was revealed that the monetary value of the drugs caught being smuggled into the country was 62 billion won, a 220% increase over last year. As well, the amount caught passing through our country while being smuggled to another country increased from 3kg to 9.9kg, and the amount of new kinds of drugs like synthetic marijuana and Kratom that was caught increased as well. Though authorities are intensifying the crackdown on drugs, steps should be taken to protect youth who are relatively more vulnerable to temptation. If the youth, who are our future, are helplessly exposed to native speaking instructors who smoke and distribute drugs, it would be a great problem. With the English education fever currently raging in Korea, the number of native speaking instructors is increasing. These days children learn English from native speakers from kindergarten. One cannot rule out the possibility that native speaking instructors have spread marijuana or narcotics to youth who study in hagwons due to the belief that studying there is the only way to learn English well.

The native speaking instructors arrested at this time did not just smoke marijuana - their multi-tiered ring even smuggled marijuana from Canada and sold it on a large scale. This is almost at the level of a criminal organization. How can the recruiting methods be so lax for the instructors who educate weak children who should be protected, and who are the country's future? There are also statistics showing that during the five years from 2006 to 2010, 82 foreign instructors were arrested for smuggling drugs like marijuana and cocaine. The fundamental reason for this problem repeatedly occurring is due to issues with the foreign instructor verification system. Currently, tests which can confirm whether native speaking instructors have used drugs are carried out within two weeks of being hired, but arguments that authorities should introduce more sophisticated new drug testing techniques and carry out periodic testing are gaining ground. Authorities should also significantly strengthen punishments against native speaking instructors who smoke drugs and marijuana, as well as the hagwons which illegally hire them.

What a great title. The opening sentence, as well, made me smile: "After a period of quiet, the native speaking instructors' marijuana problem has once again come to the fore." It reminds me of the Donga Ilbo's reaction to US and Japanese news coverage of Korean boxing staff attacking a referee who 'caused' a Korean boxer to lose a match during the 1988 Olympics: "American and Japanese media gave this front page coverage as if they were waiting for this to happen." No front page coverage in this drug bust case, of course, but using "once again" makes it sounds like Yonhap was "waiting for this to happen." Of course, as stats below show, a number of foreign teachers have been caught over the years for drugs, so on the one hand Yonhap's attitude isn't so surprising. On the other hand, well, note that there is no use of 'some teachers' in this editorial - the idea that comes across, from the title on, is native speaking instructor = marijuana user. Which, considering that the number of teachers busted each year would rarely top 0.2% of all foreign teachers, would seem to be a little on the 'untrue' or 'misleading' side. Anyways, moving on:

That these unfit people continue to educate our children goes to show that the system for hiring native speaking instructors to work in private hagwons is in itself greatly flawed.

It's true that there has been and still are loopholes in the system - just not for E-2s. Last year's amendment to the hagwon law should - once it's implemented - close the loophole for F-visa holders, but will do nothing for Korean citizens who work in hagwons - as native speakers or not - who have criminal backgrounds overseas, as we saw in December.

The statistics released on February 14th from the Korean Customs Service will be covered in a separate post.

If the youth, who are our future, are helplessly exposed to native speaking instructors who smoke and distribute drugs, it would be a great problem.

The concept of Koreans being "helplessly exposed" (or more commonly, "defenselessly exposed") to manifestations of westerners' moral flaws, whether they be drugs or AIDS, has at least 25 years behind it, but I'll delve into more when responding to another editorial on this topic.

One cannot rule out the possibility that native speaking instructors have spread marijuana or narcotics to youth who study in hagwons[.]

Because when one pays 70,000 to 150,000 won for a gram of weed, the first thought that comes to mind is, "Golly, wouldn't it be fun to smoke with my students?" I mean, one also cannot rule out the possibility that a native speaking instructor, while trying to help a bus driver who had suffered a health problem of some sort (say, a heart attack) and steering the bus to safety, might lose control of said bus and run down a group of students, so perhaps it would be best to require all native speaking teachers to have bus driving licenses as well.

There are also statistics showing that during the five years from 2006 to 2010, 82 foreign instructors were arrested for smuggling drugs like marijuana and cocaine.

It was reported in October 2010 that the Korean Customs Service had submitted material to the national assembly saying that 82 foreign instructors had been arrested for smuggling drugs since 2006. They had smuggled 12 kg of drugs worth 386 million won, with 11 cases in 2006, 22 cases each in 2007 and 2008, 17 cases in 2009, and 10 cases in 2010. As the only cocaine bust involving a foreign instructor I knew of took place in late 2005, I wondered if the inclusion of cocaine was correct in the paragraph above. As it turns out, it is - there was a bust in January 2008, as well as a large one for various drugs in November 2009 which involved cocaine.

Currently, tests which can confirm whether native speaking instructors have used drugs are carried out within two weeks of being hired, but arguments that authorities should introduce more sophisticated new drug testing techniques and carry out periodic testing are gaining ground.

More sophisticated new drug testing techniques were already introduced a year ago. Here's what it looks like now: 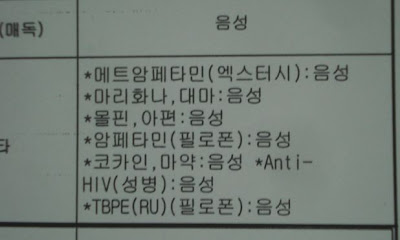 As for the idea that arguments for introducing more sophisticated new drug testing techniques and carrying out periodic testing "are gaining ground," two articles from Yonhap saying this doesn't make it so, but then it's not uncommon in the Korean media for things which look descriptive to actually be prescriptive.

This was not the only editorial on this topic - I'll try to post the other one soon.
Posted by matt at 8:17 PM

One would assume the latter, though "대마초 원어민" is a bit vague. "이런 부적격자들" however would refer to these particular teachers ('unfit people like these' would be a better translation). So, okay, "native speaking instructor = marijuana user" is a bit harsh. On the other hand, the middle paragraph goes on about drugs being imported into the country in increasing amounts, and then jumps to statements that the number of foreign instructors is increasing and there's no ruling out the possibility of them spreading drugs to vulnerable youth, without ever making a direct connection between NSETs and said drug smuggling (which would have been easy to do, since the report they refer to did connect synthetic pot smuggling with US soldiers and foreign instructors doing so for personal use). Did they not feel the need to make that connection clear, or is it just sloppy writing?