Future plans for Seoul's subway from 1988

On January 29, 1988, the Korea Times published this article outlining the future plans for Seoul's subway system: 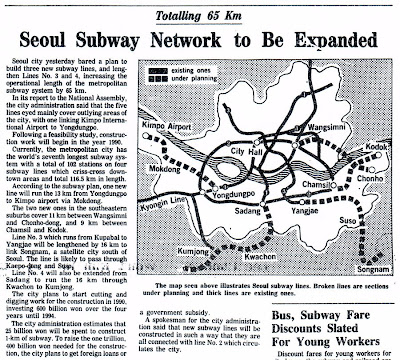 Interesting that the idea then was for extensions and spur lines. Line 4 was pretty much extended as planned, but the Kimpo and Chonho spurs were (roughly) eventually joined to make line 5, while line 3 was extended only a little (and extended a little further again in 2010), with the Godok and Songnam spurs basically being joined to make line 8. Spur lines as an idea haven't died, really - several light rail spur lines are planned to be built throughout Seoul over the next decade - see here and here for more information.
Posted by matt at 3:38 PM

A nice find! Thanks a lot for the plug too. Always interesting to see old papers like this. :)
I'd like to note that the lines you referred to are not actually spurs but completely new lines and because they are light rail, cannot be linked up as a spur. Spurs generally connect to the rest of the metro network with the same gauge rail so trains can branch off easily. Nevertheless great post!

Good point about the definition of spur. Maybe 'connected branch line' or something similar would work better. I actually meant to post on these new lines years ago when they were first announced - I still have photos of the planned routes in a folder somewhere, as well as a map I made of the city, new subway lines, the branch lines, and LMBs new towns. I should dig it out and post it...

There are a few photos here of the spur that ran from present day Bucheon Station to Kimpo Airport from the war until 1980 which might be of interest...

Amazing pictures. Thanks for directing me to them. Really interesting to find out about the line too. It would be nice to think that some of the track remains as a historical reminder but it was probably removed and reused somewhere else I guess. :)

I suspect Korea (Koreans and foreigners) can thank the Japanese for those lines. The Japanese low-interest (later zero interest; later forgiven) loans (more than 5billion usd) that enabled the Koreans to hold the '88 games were used for infrastructure as much as venues.