On February 17, the Korea Herald reported the following:

Police said Friday they have arrested and detained five people, including a Korean man with Canadian nationality, suspected of dealing marijuana in two separate drug rings.

Police also booked 31 others, including a 36-year-old college professor from the U.S., for investigation without physical detention for allegedly purchasing the drug from the arrested suspects, the Seoul Metropolitan Police Agency said.

The Canadian national, a underground hip-hop singer working as a native teacher of English, identified only by the initial of his name H, allegedly sold marijuana to fellow English teachers from the U.S. and Canada as well as to an employee of a local industrial conglomerate, the police said.

The suspects are believed to have distributed about 438 grams of Canadian and locally-grown hemp in well-known private English education institutions in Seoul and nearby and southern cities since July last year, according to the police.[...]

“We plan to further broaden our investigation as there are assumed to be more hemp-circulation rings involving native teachers (of English),” a police official said.

This was in fact simply a reprinted Yonhap article, which was a translation of this Korean language Yonhap article, published at 9am that morning, and the first to break the story. They're quite similar, except for the last two paragraphs:

Police argued that the current tests carried out on native speaking instructors within two weeks of being hired, which make it possible to confirm whether they have used drugs, should be replaced with systematic supplementary measures such as new testing methods or periodic testing carried out after being hired.

A police official said, "We ascertained the routes of distribution by questioning the suspects and hagwon officials we contacted." "We believe there are more groups distributing marijuana which involve native speaking instructors and plan to expand the investigation."

The final sentence is standard for articles about drug investigations, but suggesting carrying out periodic testing is most certainly not.

NoCut News published an article with more information and a slightly catchier title:

Those arrested include 13 hagwon instructors, 10 company workers, an (American) university professor and a university student, 5 unemployed people, and 5 people working as consultants or used car dealers.

The 5 who were arrested taught English mostly to kindergarten students and elementary, middle, or high school students at well known hagwons in places like Seoul, Seongnam, Cheonan, and Asan and got into the 'pot business' to make money for living and entertainment expenses.

The police investigation found that there is a step when hiring native speaking instructors in which the hagwon must receive a medical report' including drug test results, but this is often ignored.

Police explained that the [current tests are] normally only effective in detecting drug use within the past 1-2 weeks, making it difficult to catch [users], and that native speaking instructors who have used drugs can easily find new jobs.

70,000-150,000 per gram? If you're wanting to ask, "Who would pay those prices?" we'll get to that in a minute or two. NoCut News seems to be, by stating that current tests are "normally only effective in detecting drug use within the past 1-2 weeks," also pushing for periodic drug tests. I'm not sure I'd take seriously the opinion of a paper in regard to drug policy when it posts photos like this to illustrate a marijuana bust: 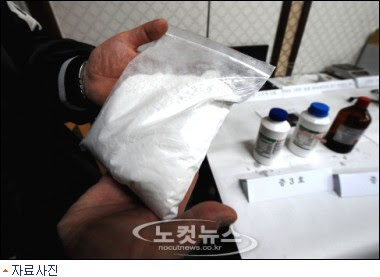 An MBC report included this shot of the press conference given at Mapo police station on the morning of the 17th: 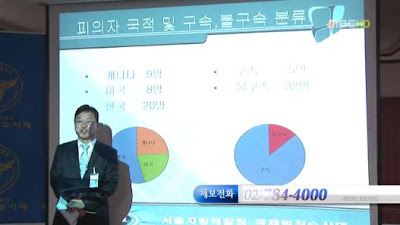 It's hard to read, but it breaks down those arrested by nationality, with 9 Canadians, 8 Americans, and 20 Koreans. It also makes clear that 32 were booked without detention, not 31. Newsis also included some shots of the conference: 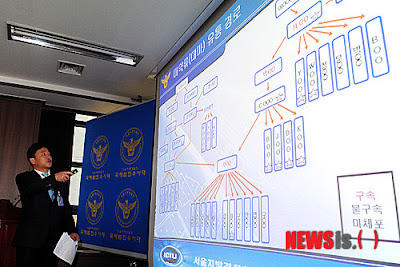 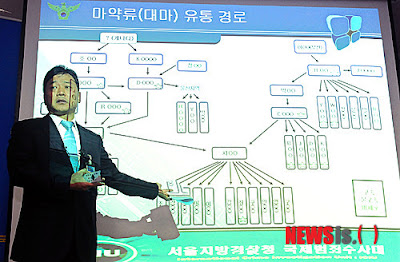 (From here.)
It certainly looks like the police were busy.

The Chosun Ilbo's article, published on the 18th, states that the hip hop singer's last name is Ham, and he performed in Hongdae clubs. It states that 483 grams were sold, 'enough to be smoked a thousand times.' I was thinking that figure might be a typo, but MBC's report on the night of the 17th also quoted 483 grams, but announced instead that it was enough for 480 people.

The MBC report also brought up something not mentioned previously - that the 'office workers' who were arrested were, in fact, the children of well known, affluent leaders of society:

"In the case of some children of the rich who had experience studying overseas, they easily had access to and experience with drugs in a foreign country and when they returned to Korea they bought drugs from foreigners or gyopo."

Among those caught for smoking marijuana was the grandson of the founder of a jaebeol group, a vice president of a social commerce company, the nephew of the president of a savings bank, the chairman of a jaebol subsidiary, and the son of a well known professor at a prestigious university.

However, police today announced the results of the investigation, but the children of these leaders of society were simply identified as 'office workers,' raising suspicions of lobbying to cover it up.

So, if you were wondering who would be willing to pay 70,000-150,000 per gram, I think this answers the question. The MBC report also mentions that one instructor already received a suspended sentence before for distributing marijuana. This Munhwa Ilbo article also states this -and adds some other rather interesting information:

The police investigation results found that the thirteen native speaking instructors, including H, were Canadian and American citizens of Korean ethnicity who taught English to elementary, middle and high school students in well known hagwons, while secretly trafficking in marijuana as part of a group. In particular, it was found that H had in the past received a suspended sentence in court for the same crime, but as he hadn't received any sanctions, he worked as a native speaking instructor and committed the same crime again.

In other words, H is too stupid to live [if the previous bust was in Korea]. If the allegations are true and he jumped back into dealing again after having been caught once and given a break, somehow I doubt he'll be getting a suspended sentence this time.

Now to the other important part of that Munhwa Ilbo article - the fact that "the thirteen native speaking instructors, including H, were Canadian and American citizens of Korean ethnicity." When NoCut News reported this - "when hiring native speaking instructors in which the hagwon must receive a 'medical report' including drug test results, but this is often ignored" - I figured that either they were quite ignorant of E-2 visa rules, in which it's impossible to ignore this step (not surprising for a journalist/editor that thinks marijuana is a white powder), or that the teachers in question were on F visas. If the teachers are 'Canadian and American citizens of Korean ethnicity,' then it's much more likely that they are F-4 visa holders, and in that case E-2 visa drug testing rules would not apply to them.

However, the newly amended hagwon law, which, under the auspices of the Ministry of Education, requires drug testing to get a hagwon job, would apply to them. It's possible that teachers currently employed would not have been tested yet, though according to the bill, they should have been by now:

If it has been necessary to submit these documents, then this is likely what the police refer to when they say 'this is often ignored.' Which brings us to the suggestion that, perhaps before instituting new, stronger, 'periodic testing' of foreign instructors, the police might want to see to it that the laws currently in place are actually enforced before making new ones?

I should also mention that, if you were thinking that the sons and daughters of the rich getting caught smoking pot would be a big news story, think again. There have been over 25 reports on this drug bust focusing on foreign instructors being arrested, but only two - the MBC report which broke the story and a Money Today report the next day which focused exclusively on the story - have mentioned the 'children of the rich' angle. But then, who would you target? The children of the people who run the country, or comparatively powerless foreigners? It's not a difficult question to answer.

Yonhap was obviously having a slow news day when they broke this story. Within 90 minutes of the Korean language article going up, a translation was published, and several hours after that they put out an editorial titled "It's regretful that English education is entrusted to marijuana [smoking] native speakers." I'll post that tomorrow.
Posted by matt at 2:36 PM

i live in one the cities mentioned and happened to have met mr. "H" on a few occasions, so i can shed a little more light on this. first of all, these arrests were over a month ago, though i can't remember the precise date. "H" was the proprietor of a local bar which has been closed for some time as a result of this bust.

one of the others affected was one of his co-workers at the hagwon, and apparently the police were coming for that other person but recognized "H" by sight. they were unaware that he worked there but were fortunate enough to catch two fish in their net.

for the sake of privacy i won't reveal my sources or the names of the hagwon or arrestees. it's one of those "every here has heard about it" kind of stories, but given my sources i can be certain about the accuracy.

I'm working with Roking Korea, a magazine company that publishes English content for foreigners about Korean culture. We recently launched Bridge Paperzine (http://www.facebook.com/bridgepaperzine), a biweekly magazine about Korean society, entertainment, people, travel, food, lifestyle and more. We curate the best content out there from bloggers and are definitely interested in syndicating your blog with Bridge! If you could shoot me an email thucchi.nguyen@gmail.com (or reply with your email), I would love to send you more info. Hope to hear from you soon, Matt!

Thanks so much,
Chi
http://www.rokingmagazine.com/

Thanks for the comment. I can't find any contact info for you, and for the sake of privacy I'd rather ask you a question off the grid. Can you email me at mattvanv at yahoo dot com if you get the chance?

Hmmm, this makes me wonder why drug tests for foreign university professors are not yet required. As far as I understand, they aren't.