Changes in Itaewon over the years

To continue on from this post about a portrayal of Itaewon in 1984, I'll direct you to Kim Eun-Shil's 2004 Korea Journal article "Itaewon as an Alien Space within the Nation-State and a Place in the Globalization Era."

Itaewon was called the "Las Vegas of Seoul," which meant that it had turned into a recreation center and a place of cultural consumption for American soldiers. Until recently, the Korean mass media viewed Itaewon as a place of excretory culture, where American soldiers engaged in hedonism, prostitution, illegal drugs, and criminal activities. But in the globalization process, transnational phenomena have become everyday affairs and the cultural particularity of Itaewon is fading. [...]

Located near the Yongsan base, Itaewon started out as a military camptown for soldiers stationed in Yongsan. In the 1960s, foreign diplomatic establishments were set up in Itaewon-dong and Hannam-dong, and in 1963, a group of American army apartments were built as a collective foreign residential area in the firing ranges. Itaewon became a comfort zone for American soldiers. Indeed, Itaewon is still widely regarded as Seoul's American military district to the present day. Throughout the 1970s and 1980s, Itaewon had been developed into a densely crowded commercial area with a large number of recreational businesses, earning it the name "shopping paradise by day, prostitution paradise by night."[...]

To many Koreans, Itaewon was the place of the American Dream throughout the 1970s and into the mid-1980s. It was the general assumption that the U.S. was a wealthy country, and Korean women were under the impression that American men were kind to women and children and liberal compared to Korean men. Therefore, many Korean women regarded marriage with Americans to be an upgrade of life.

Much of this is in accord with the 1984 Kyunghyang Sinmun article. Things began to change with the Olympics on there horizon. Here is a September 28, 1988 Korea Times article pitching Itaewon to tourists during the Olympics: 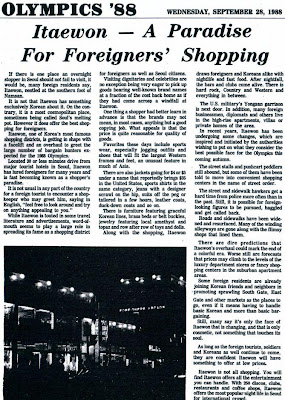 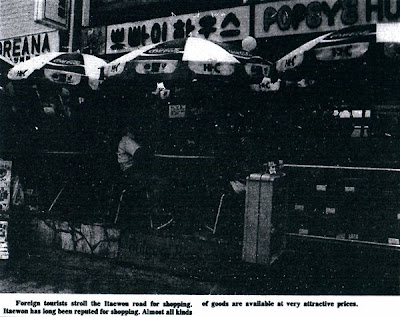 It mostly focuses on shopping, but the post Olympics era brought on changes for Itaewon, including problems with providing cheap, authentic (made-in-Korea) clothes, which led to knock-offs which were eventually cracked down on by authorities. There were other changes as well:

Ms. Yi says that after the 1988 Olympics and into the 1990s, there was a change in the consciousness of the women working as waitresses in Itaewon. In the 1990s, female college students working part time in Itaewon preferred to travel to the U.S. rather than marry an American. There began a pattern of student employees working for 6 to 12 months in Korea and then leaving for the U.S. to study English. With the liberalization of travel overseas and the rapid growth of the Korean economy, as well as a general change in social consciousness, the dreams of marrying Americans lost a great deal of their appeal. [...]

Many interviewees said that during the Olympics, Itaewon was packed with tourists, but that afterwards, the mass media looked down on Itaewon as a place of crime and squalor. They were angry that the government first behaved as if it were satisfied with earning dollars, but that once Itaewon became famous, the government treated the neighborhood as if it were corrupt.[...]

The identity of Korean women in Itaewon encounters a clash in the presence of Korean men. The owners of recreational businesses in Itaewon have asserted that Itaewon's clubs should be made into foreigner-only establishments. According to them, Korean men cannot bear feeling like they are being served worse than the foreign male customers by Korean women or watching Korean women leave their table to greet foreigners. They say that it is not hard to see drunken Koreans creating a scene and screaming that it is anti-nationalist for Korean women to provide better service to foreign men in Korea. Such behavior shows the patriarchal and male-centered idea that Korean women belong to the nation-state or are a property of Korean men. The tension around the territory of Itaewon is manifested as a struggle over who owns Korean women, rather than the direct confrontation between the American army and Korean men. Mr. Sin and Ms. Yi, both owners of recreational businesses, say that when Korean men come to a bar or club in Itaewon, the night usually ends in a brawl. This indicates an underlying competition over territory in the frontier zone, with women as the medium.

Of course, the research for this article is likely more than ten years old, and even by 2004, things were changing, as this lengthy Joongang Daily article from 2004, about how more Koreans were starting to go to Itaewon, points out:

John Yoo, a 37-year-old Korean having dinner with his wife at Le Saint-Ex, says that the perception of Itaewon has changed. In the past, he says, there were two kinds of girls who came to Itaewon: those who “serviced” GIs and those who wanted to meet and marry a GI to move to the United States.

“But now, if I see a Korean girl in Itaewon, I think maybe she has friends who are foreigners or maybe she’s married to a foreigner,” he says.

His wife, who is a few years younger, disagrees. She loves coming to Itaewon during the day to shop, she admits, but “a Korean girl at night in Itaewon still looks bad.”[...]

B.C. Chong, who has had a tailor shop in Itaewon since 1972, holds administrative positions with the Korea and Itaewon Special Tourism Zone Associations. He recalls that in the 1960s and 1970s, Itaewon was a seedier place, full of bars with strip shows and open prostitution. With the rapes, fights and violence that occurred there between GIs and Koreans during that time, Itaewon got a reputation as a dangerous place.

At that time, Mr. Chong says, “any Korean girl walking or hanging around with a GI, we treat her like a prostitute. Why do you meet a GI? For what?” he asks. “For money. Selling your body, that’s all.” But now, he says, it’s very different. No one thinks that way anymore about Korean women who come to Itaewon because the neighborhood has changed, he says.

A friend who had been away from Korea for three years told me he was surprised by the number of Koreans he saw in Itaewon late at night. Perhaps part of the reason for the increase over the last year has been this song and video, though I imagine it both captured a bit of the already-existing move in that direction, and propelled it further.
Posted by matt at 10:49 AM

I have this theory that with regards to foreigners in Korea, the local male populace only care about two things: Money and Vagina.

Whatever money you're earning, you're taking it from them.

Whatever vagina you're poking, you're depriving them of poking it.

Money and Vagina are the two things absolutely consuming the minds of these Korean males who disparage foreigners. They are absolutely obsessed in such a narrow way with these two solitary aspects of foreigner life in Korea.

Truth is, with money and vagina removed from the equation, these local men who are at the bottom of the social status pyramid wouldn't have much to complain about with regards to foreigners, and they'd likely turn their focus onto another scape goat, like rich people.

I can't wait to see what Korea will be like when this entire generation, who are basically a drag on society to begin with, dies off.

You refer to "the local male populace" and then say "I can't wait to see what Korea will be like when this entire generation, who are basically a drag on society to begin with, dies off." Which leaves me confused as to who you're talking about. I imagine most of the netizens who first got angry at rude comments written by foreign teachers in 2005 would have been in their 20s or 30s.

I think the issues run deeper than what you've suggested. Ask a Korean has a good breakdown of some of them here, some of which can be applied to attitudes towards soldiers as well.

Great line: "Such behavior shows the patriarchal and male-centered idea that Korean women belong to the nation-state or are a property of Korean men."

This article about the history of Itaewon is the best on the subject I could come across.It expresses my experiences there 30 years ago and what I could expect there now. Looks like only the name is left from what it once was..