Anti English Spectrum, aka Citizens movement to expel illegal teachers of foreign languages, aka Citizens for proper English education, have posted a new announcement on their front page:

For 8 years, Citizens for proper English education have carried out the activities and made the efforts below:

We made it so that the materials needed to get a native speaking conversation instruction E-2 visa now include medical certificates, criminal background checks, and degree verification.

To the present, around 150 unfit instructors have been caught and brought to justice for drugs, sex crimes and forged diplomas.

We made efforts to have foreign instructors fingerprinted.

We contributed to the new kind of drug Spice Gold being designated as an illegal drug.

[We have contributed to] numerous newspapers and broadcasts which have led citizens to feel how serious the native speaking problem is.

We succeeded in reducing native speaking assistant teachers [in schools].

We've submitted thousands of petitions to the relevant agencies to shape public opinion about strengthening the verification of native speaking instructors.

Strange that they left out 'following foreigners and going through their garbage,' 'painting foreign instructors as AIDS-infected threats to Korean womanhood' ("thousands or tens of thousands" of whom are "the sexual playthings or sex slaves of foreign teachers"), and 'tracking down and humiliating women seen in photos with foreign instructors.' But, hey, sometimes I'm forgetful too.

As for "We succeeded in reducing native speaking assistant teachers [in schools]," this was the goal they wrote on their homepage last year (one which I never got around to posting, but will). While the media had looked at both the foreign teachers' lack of qualifications as well as their average salary in the past, talk in the media of the need to reduce foreign instructors in schools solely based on budget concerns may have been predated by AES saying on their front page last year that 300 trillion won was being wasted on foreign teachers every year. Also interesting is that they said, "native speaking instructors simply using their native tongue must disappear" from English language education. The reason this is interesting because of the title SBS used when they broke the report of SMOE cutting foreign teachers back in December: 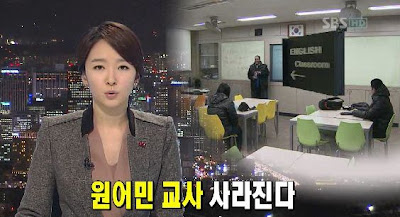 Native speaking teachers disappearing
I thought that a rather odd way to put it, at the time (especially since they weren't disappearing at all, but then I guess riling people up to attract attention is how it has to be done). Perhaps AES was simply ahead of the curve in tapping the zeitgeist, or perhaps they helped shape it (as they have before). It's hard to know either way, but it is an interesting coincidence.
Posted by matt at 2:40 PM

What sad little people do in their spare time.