The Korea Customs Service report on drug smuggling in 2011

I hadn't realized the Korea Customs Service had released its 2011 drug smuggling stats until I read this editorial; the report can be found here (.hwp file).

Here are two translated graphs provided in the report: 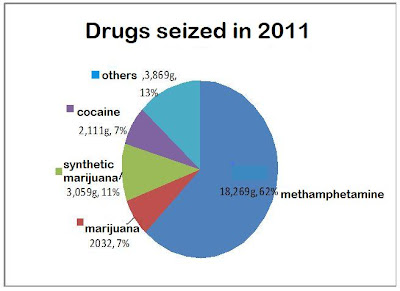 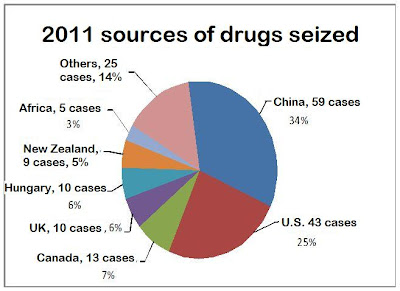 Smuggling from China and Africa generally involved international crime organizations smuggling methamphetamine, while seizures from the US and Canada usually involved marijuana or synthetic marijuana for personal use smuggled by people like US soldiers or foreign English teachers.

It listed three smuggling trends for 2011.

The third trend is the continuing increase in the smuggling of new kinds of drugs like synthetic marijuana (41 cases, 3.1 kg) and Kratom (3 cases, 1.5kg), which increased by 406% and 78% respectively.

Also I should add that, much like recent reports of sentences for foreign teachers, US soldiers tried for drug offenses in July and November last year and January this year also received fines or suspended sentences.
Posted by matt at 8:13 PM