The May 2011 ordinance to "'Expel' drug addicted, molesting foreign instructors" from Gyeonggi-do

On May 3, the Gyeongin Ilbo published an article titled "'Expel' drug addicted, molesting foreign instructors" which was about an ordinance being considered by the Gyeonggi Provincial Assembly, which was not directed at foreign instructors alone (but they had newspapers to sell, right?). I described it in this post at the time:

A look at the bill itself, which can be found here, makes things clearer. The goal of the bill is to change the criteria for taking administrative measures against hagwons, in this case, for failure to carry out criminal record checks for sex crimes and drug offenses. Thus the bill will revise the existing law for hagwons in places where it restricts the fundamental rights of students. In regard to this, it lists the following aims:

To establish standards for administrative penalties according to the enforcement of a system to restrict employment of those who have committed sex crimes against children or youth, according to article 44 of the 'Child and youth sexual protection law.'

As there have been cases of foreign instructors arrested for things such as taking and trafficking drugs, in order to prevent the teaching activities of those addicted to narcotics or other drugs, penalty clauses will be established and criteria of administrative measures will be prepared.

Another aim is to set penalties for hagwon owners or instructors who do not complete training courses.

A bill to take administrative measures against hagwons that hire foreign or Korean instructors who take or smuggle drugs was passed by the pertinent standing committee on the 9th.

The bill is the first to be proposed in the country, but there is dispute as to the lawfulness of the bill, as there is no basis for the administrative measures found in the higher law.

On that morning at the opening of the 259th provisional session of the provincial assembly's board of education, 53 people including Rep. Choi Chang-ui (Gyeonggi) and Lee Sang-hun (Bucheon) passed a vote on the original draft of the jointly proposed "Partly revised bill on the Ordinance for the establishment and management of hagwons and private lessons in Gyeonggi-do."

The provincial assembly and provincial office of education both agreed that the bill's ordering of stage by stage administrative measures for hagwons which do not carry out criminal record checks for sex crimes or who hire sex criminals was possible based on the "Child and youth sexual protection law" promulgated in April last year.

But the problem is that in order to [be able to] take administrative measures against hagwons which hire drug addicts, the higher law, the 'Law for the establishment and management of hagwons and private lessons' must authorize it, but the law does not stipulate such things.

Article 22 of the Local Autonomy Act stipulates that ordinances can be enacted within the scope of the law, and that legal authorization(/mandate of law) is necessary when limiting residents' rights by imposing obligations or determining penalties.

The provincial education office revealed in its opinion sent to the provincial assembly that "The preparation of administrative measure regulations in the form of an ordinance to thoroughly block those addicted to narcotics and psychotropic drugs when hiring hagwon instructors is pressing, but enforcement of the ordinance would realistically be difficult."

The results of an advising lawyer's assessment, concluding that the enforcement of such an ordinance would be impossible, was also sent to the Ministry of Education, Science and Technology (MEST) together with a request for (the MEST's) decision regarding this matter.

Rep. Choi Chang-ui said, "Having instructors addicted to drugs in charge of the education of children is a serious situation. It is not that the ordinance runs contrary to the higher law, it is only weak in its argument." "We should not allow drug addicts to be hired by hagwons and should give a positive interpretation of the right of students to receive education in an upright environment."

An education ministry official said, "Not only the provincial education office but also at the level of the education ministry the legality of the ordinance is being considered through an advising lawyer." "A plan regarding a request for reconsideration of the Gyeonggi Provincial Assembly's decision will be determined on the basis of the results of consultation with an advising lawyer."

The ordinance will be finally settled at the 4th regular session on the 14th.

This might sound a lot like, 'Well, it's not really legal, but we'll pass it anyway.' On May 15, the Simin Ilbo reported further on the bills:

Drug addicted native speaking teachers are being expelled in Gyeonggi-do
A revised ordinance in the Provincial Assembly is the first in the country; hagwons who hire [drug addicts] face administrative measures

For the first time anywhere in Korea, the Gyeonggi-do Provincial Assembly passed an amendment ordinance actually allowing the expulsion of Korean or foreign instructors for taking or smuggling drugs.

On the 15th the provincial assembly announced that 17 items, including an ordinance allowing administrative penalties to be taken against hagwons which hire Korean or foreign instructors who take or smuggle drugs, had been passed and [the session] closed on the 13th.

Though there was controversy over the legality of this ordinance's administrative penalties as it had no basis in the higher law, the bill was passed unanimously in the provincial assembly.

This is because Article 22 of the Local Autonomy Law does not allow for individual ordinances to limit residents' fundamental rights without the authorization of a higher law.

Therefore, the Ministry of Education, Science and Technology and the education office were expected to ask for a reconsideration, but as these organizations are sympathetic to the intent of the ordinance, they will not raise any issues.

An official at the Ministry of Education said, “As there were no regulations in regard to the great social problem of instructors addicted to drugs, we were in the process of revising the existing ‘hagwon law.’ However, the Gyeonggi-do Provincial Assembly went ahead before us and established an ordinance. Since it was a matter of only about one month difference in terms of procedural issues, we could not completely deny the ordinance and therefore decided to deliberate with the Provincial Education Office and not request a reconsideration.

So, it wasn't legal to pass it at the time, but it would be okay in a month or two when amendments to the Hagwon law were passed in the National Assembly (on June 29). I found it interesting that the Gyeongin Ilbo reported later in July that

What ordinance did the paper give as its first example?

Among these was an ordinance to expel native speaking teachers addicted to drugs[.]

That the ordinance was passed without the authority of a higher law (temporarily) is understandable, of course, since it's meant to combat the "great social problem of instructors addicted to drugs." Or as Rep. Choi Chang-ui put it, "Having instructors addicted to drugs in charge of the education of children is a serious situation. [...] We should not allow drug addicts to be hired by hagwons."

On the one hand, this could be said to show how seriously Koreans take drug crimes, even those involving marijuana (which is the drug most foreign teachers are busted for and which is often tolerated in North America). Still, it's interesting that he mentions "instructors addicted to drugs," because, though that connection has occasionally been made before (such as in this case) that's not generally how foreign teachers have been described. As 'drug takers' and 'drug smugglers,' yes (for example the Newsis report from a year ago which stated that "The main culprits in drug smuggling are native teachers" though they made up 14% of those arrested in 2010). But references to them as 'addicts' - by even politicians who included such language in legislation - became more common over the first half of 2011.

In February last year, the deaths (one a suicide) of two foreign teachers while drunk were used by the media (see here, here and here) as a chance to bring up "criminal acts and various scandals by native speaking teachers" and say that it's difficult to "determine drug or alcohol addiction" among such teachers, pointing to a need for better screening. As well, new E-2 drug testing regulations introduced that month called for testing only at special hospitals in order to, as one article put it, "distinguish whether a foreign English teacher is a drug addict or alcoholic." With the ordinance above, such language has made it into law, as it punishes "[h]iring someone addicted to narcotics, marijuana, or psychotropic drugs" and attempts "to prevent the teaching activities of those addicted to narcotics or other drugs" because "there have been cases of foreign instructors arrested for things such as taking and trafficking drugs[.]"

Some articles about the ordinance do not reference foreign instructors by name, such as a Gyeongin Ilbo article one from May 16 titled in part "Provincial Assembly settles "Drug instructor expulsion," which states that

On the 13th the fourth plenary session of the 259th provisional session of the Gyeonggi Provincial Assembly dealt with 17 ordinance bills including one to expel drug instructors.

However, though "drug instructor" does not mention foreigners, it's likely to be equated with foreign instructors. Of the first 150 results of a search for 강사 마약 on Naver, more than two thirds were for foreign instructors, with that figure reaching 90% if you included the 25-30 articles about this case involving entertainers and Korean American English hagwon instructors being arrested for drugs in May 2010. You've got to love the cartoon in the linked article: 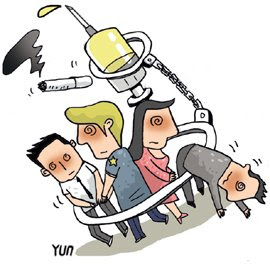 It might be worth noting that the same assembly which passed this bill would, two months later, refuse to pass a supplementary budget to pay GEPIK foreign teachers which threatened hundreds of jobs.
Posted by matt at 2:54 PM