"The most tragic event in Korea’s modern history"

Yesterday was the 50th anniversary of Park Chung-hee's coup in 1961, which I've looked at before here and here. According to this interview with Kim Jong-pil, one of the coup's architects, the coup was inspired by Nasser's. The Korea Times had an article looking at the legacy of Park's rule and the nostalgia some feel for him.

Professor Rhee Young-hoon of the Department of Economics at Seoul National University said in an interview with Yonhap that the “current political leadership that lacks the capability to resolve social divisions” caused the eruption of so-called Park Chung-hee nostalgia.

“The May 16 event was basically all about a military coup. But the coup became a milestone event that initiated the nation’s modernization,” the conservative economist said.

Liberals’ interpretation of the May 16 coup is very different.

Rep. Park Jie-won of the main opposition Democratic Party called it the most tragic event in Korea’s modern history, saying the coup paved the way for 36 years of military rule in the nation.

The DP lawmaker also played down the late President’s role in industrialization.

According to Yonhap, Park said that Chang Myon's democratic government formed after 4.19 had already established a 5 year plan, and Park borrowed the idea. And focusing on the "36 years of military rule" (though it could be argued that the period from 1963-71 was not military rule) helps to ignore the 13 year-long thugocracy run by Syngman Rhee, whose election rigging, torture and firing on students led to his overthrow. And to be sure, when I think of "the most tragic event in Korea’s modern history," I tend to think of this: 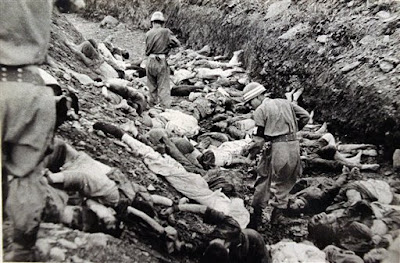 Apparently the Korean War rates below Park's coup in terms of tragic events, at least when you're the head of the Democratic Party. One imagines he's also taking potshots at Park Geun-hye, who is discussed in connection with her father here. 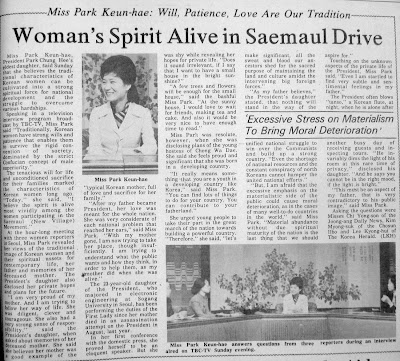 Wow, the only thing that's changed about her in 35 years is her hairstyle.