I'd seen photos of Park Chung-hee's May 16, 1961 coup similar to this one, published by Yonhap the other day, (another is here) but had never known who else was in the photo. Yonhap's caption states that the man on the right in Cha Ji-cheol: 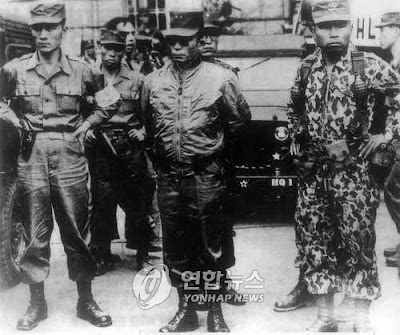 Cha became the head of presidential security, and towards the end of Park's reign Park tended to be swayed by Cha's hard-line point of view over that of KCIA head Kim Jae-gyu, who suggested a more conciliatory stance. Below is a photo of Park (front, center) and his children (front row; Geun-hye, Geun-yeong, and Ji-man) and inner circle, taken in the late 1970s. Cha Ji-cheol can be seen in the back row, center, flanked by Chun Doo-hwan (head of Defense Security Command), and Kim Gye-won (Blue house chief secretary), while Jeong Seung-hwa (army chief of staff) is on the far right in the front row.


Everyone in the photo (other than Park's children and Chun Doo-hwan) was present in the KCIA compound on October 26, 1979, the night Park Chung-hee died - the only person missing is KCIA head Kim Jae-gyu, the shooter. Park and Kim had known each other since they were trained as officers together by the US Military Government in 1946 as part of the second class of the officer training school for the Korean Constabulary (the precursor of the ROK Army). That night in 1979, Kim killed Park and Cha, but spared Kim Gye-won (who would point out Kim as the assassin). Jeong Seung-hwa, who was present in another part of the KCIA compound the night of the assassination, was essentially put in charge of the country when martial law was declared, and Chun Doo-hwan was put in charge of the investigation into the murder. When Jeong realized just how ambitious Chun was, he planned to transfer him to Gangwon-do, but Chun struck first and arrested him, initiating the coup (within the military) of December 12, 1979. Jeong could have been executed on trumped-up charges, but may have been saved by a birthday card sent to him in prison by head of USFK General Wickham, which enraged Chun and made it clear the US was concerned about his fate. From there Chun slowly took over the country, expanding martial law and closing the national assembly and the universities on May 17, 1980, which set off the Gwangju Uprising.

Oh, and the KT has an editorial related to this topic here worth reading.
Posted by matt at 1:00 PM