Korea Must Beware of Growing Crime by Foreigners 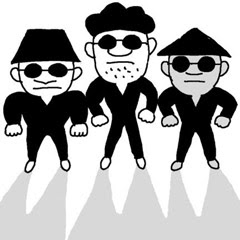 Not the latest boy band.
Or so says the Chosun Ilbo, which compares foreign gang problems in the US to Korea and predicts a dark future if there isn't good enough screening in place. There's certainly fair enough reason to be concerned, as the foreign crime rate is rising, but one gets the idea from the article that Korean gangs aren't a problem, and that foreign gangs are a problem simply because they're foreign. I've looked at foreign crime stats before here.

The Chosun Ilbo also published this article, which says that much of North Korea's history will be removed from textbooks:

Lee Tae-jin of the National Institute of Korean History told the Chosun Ilbo on Thursday, "There is too much information about North Korea in high school history textbooks, and we decided to first reduce it to one-third in the portion describing the country's history after independence from Japanese occupation in 1945."

The institute plans to cut the post-independence part from 22 percent of the textbooks to 10 percent. It will revise guidelines for high school history textbooks by the end of this year and review the updated versions in the second half of 2012.

Does that mean that the history of the ROK will be reduced to only 10% of high school history textbooks? That hardly seems like much, but on the other hand, teaching too much about what happened between North and South Korea might make reunification even less appealing than it already is to many.
Posted by matt at 12:27 PM

Yes. Screening should be in place--for all folks. I would recommend starting with folks coming in on the F 4 Ethnic Korean visa.

Yes, ALL people should be screened.

They can screen all they want. People with problems are still going to cause problems, and no screen's going to stop that.

I agree with Eve, I'm pretty skeptical about the efficiency of screening. It would be interesting to have some stats to check whether screening actually helps curving crime.

Exactly... and don't lock your doors either. If someone really wants to break into your house and steal your stuff, they'll find a way. So why bother locking up?

Screening will never be 100% effective. But make the conditions too loose, and you will fail to prevent serious offenders from entering the country; set them too tight, and you might end up preventing people from entering simply because of unpaid parking tickets.