The case of the disappearing drug mule

As it turns out, there's more to be said about the story of the philipon smuggling involving a supposed native speaking teacher that Yonhap broke on May 4. To summarize, a dealer in South Africa used a South African woman as a mule to bring almost a kilo of philipon into Korea in her luggage and got caught at Incheon Airport. Two months later (ie. at the end of April) police caught the dealer she was supposed to make the delivery to - a Nigerian who had illegally taught English here in a hagwon at some point (among other jobs). Now, I was thinking that Yonhap's title "Former native speaking instructor caught smuggling philopon" was misleading in that the Nigerian wasn't actually the smuggler, but since he was part of the plot, it could be argued the title wasn't that much of stretch. I figured it was the at the very minor end of the "misleading" scale, so I didn't mention it when I blogged on it at the time. Yonhap also referred to him as a "Nigerian English instructor who came to Korea in 2006" (implying he has always been working as a teacher here) in the body of the article, while the Chosun Ilbo said he first worked as a factory worker.

Later in the evening on the day the story broke, however, YTN provided a crash course in how to mislead readers. Kudos to YTN, the television arm of state-run Yonhap, "Korea's Reuters." Compare the following to the summary above (or the Yonhap article):

Seoul Metropolitan Police Agency arrested two people including 32 year-old Nigerian C for bringing a large amount of Philipon into Korea from South Africa and trying to distribute it.

C and another were charged for bringing to Incheon Airport, hidden in luggage, 900 grams of philipon worth 3.2 billion won given to them by a drug dealer in Johannesburg in February.

It was discovered that C came to Korea in 2006 and worked as a native speaking English instructor and clothing exporter at the same time but when the business failed he tried his hand at smuggling drugs.

The news report can be watched here, and shows the half-assed way in which the meth was hidden in her bag: 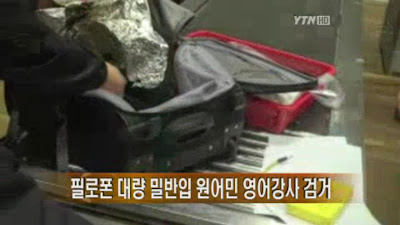 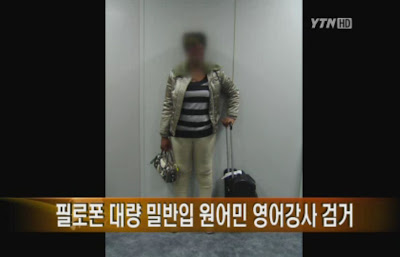 If we remember, the person arrested at the airport for smuggling meth into Korea was a South African woman who was to deliver it to a Nigerian living in Korea who was a 'former native speaking teacher'. It's ironic that YTN has shown a photo that I imagine is the South African woman smuggler mentioned in all the other reports, considering she has been effectively erased from the story to focus on the 'native speaking teacher.' This was done by, obviously, not mentioning her and by using the formulation "C 씨 등은..." which is talking about C, the Nigerian, but also implies that the second, unmentioned person is being talked about as well, allowing YTN to make it appear as if a native speaking teacher had been caught smuggling meth into the country (as seen in the photo above). And because "C 씨" could be male or female (though its generally assumed to be male and is often noted in brackets if its a female, that's not always the case), viewers are led to believe (aided by the caption) that the photo above is of the invented Nigerian native speaking teacher smuggler.

This isn't the first time YTN has done this. In 2009, when police announced two drug arrests - one involving two Canadian teachers and another involving some 34 Thais, Yonhap published an article mentioning both arrests, but followed it up with another that focused almost entirely on the teachers. YTN took this to its logical extreme later in the day by broadcasting a report that omitted the Thai workers entirely. (And let's not forget these two classic YTN reports.) The same process has occurred here as well, wherein the South African smuggler who had gotten in the way of the story YTN apparently wanted to tell - "native speaking English teachers import drugs (and not just pot, but now meth)" - was removed in order to communicate its preferred narrative unencumbered by factual distractions.

New, expanded version! (I'd forgotten about this cartoon)
Now, had the 'native speaking teacher' been a Korean American who, say, had murdered a 75 year-old man, fled the US and lived on the lam in Korea for 10 years before being extradited to the US and sentenced to life in prison with no parole, perhaps the article might have turned out like this Weekly Donga article, which made prominent the fact that 'he didn't mean to kill him' and hinted that the racism he faced in America had twisted him (and perhaps influenced the verdict). The title? "Philadelphia fugitive's 'cruel fate'."


* Wikipedia has information on the origins of methamphetamine and Japanese-produced Philopon, including an interesting 1948 lawsuit.
Posted by matt at 9:29 AM

What are the countries that qualify as "native English speaking"? Off the top of my head, US, Canada, Australia, New Zealand, England and I know I'm missing a few. Definitely not Nigeria.

Anyways, thanks for fighting the good fight.