Via my friend Ryan, it seems the BBC has picked up yesterday's Korea Times story about the kerfuffle caused by short skirts worn by students, a problem to be solved in Gangwon-do by spending about 820 million won to change the desks by placing boards across their fronts. Ten years ago all the leg I remember seeing was seen under practically knee-length shorts in the summer, and knee-length skirts on schoolgirls. Things have changed a lot, with the relaxing of rules for students in the past five years being, I think, a pretty direct cause for these changes among students (with the prevalence of short skirts being something that has occurred over only the last two years (and over the last year, I think, in my neighbourhood).

There has also apparently been an increase in middle school students wearing makeup, which James attributes to teen girl groups and their appearances in makeup advertising. I imagine that's correct, though it likely wouldn't have been possible under the 'appearance management regime' that existed in most middle and high schools until recently. As the stories of a Korean friend who teaches at a private boys' high school remind me, though, not every school has done away with those regulations. His school has a roving band equipped with hair clippers which walks into classes and checks the boys appearances, providing immediate haircuts for offenders, Yusin style. In fact, here's a piece from Stars and Stripes from June 12, 1974 about a similar crackdown: 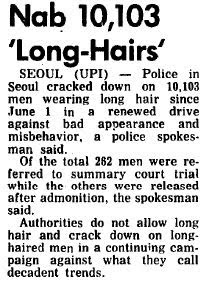 Of course, back then short skirts used to be measured on the street as well...
Posted by matt at 7:56 AM

Glad to hear the story making more news... but will it stop other school systems from doing the same? 820 million won pays for a lot of desks - or raises for teachers, computers that actually work, and a native English-speaking editor.

There used to be, at Kyobo bookstore if I remember right, a big black and white photo from the 60s or 70s of a cop sternly measuring the skirt length of some girl on a crowded street.

Thanks very much for the link Matt, although technically I did (briefly) acknowledge the role of the relaxing of school rules regarding uniforms!

Not related to this post sorry, but in one of your earlier posts on conscientious objection I tried to post a link to The Economist's recent article on conscription (conscientious objection is mentioned in the comments), but unfortunately Blogspot wouldn't let me. If you're interested, then try Googling "Hallyu Elvis and the draft-dodger".

Didn't mean to suggest you hadn't acknowledged it (though I did think you underplayed it a little). Thanks for suggesting the Economist article. I'll add it to that post.

Yeah, I did get a bit carried away!

Hat tip to you on this: http://www.busanhaps.com/article/skirtroversy-korea