From Yonhap and the Donga Ilbo: 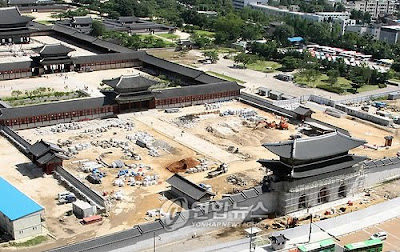 After three and a half years of work (which involved uncovering old foundations), Gwanghwamun was uncovered yesterday, but won't be officially opened until Independence Day. Interesting that they're enclosing the area behind the gate - I guess they're trying to make it as historically accurate as possible, insofar as it resembles the palace's reconstruction from the 1860s (and not the pile of rubble it was from the 1590s to the 1860s).
Posted by matt at 5:03 PM

As someone who commutes through Gwanghwamun everday, I've been thrilled to see the gate uncovered. I've always loved the view of Admiral Yi, the palace and Inhwangsan on a sunny day.