Sex crimes against children put under a microscope by the media 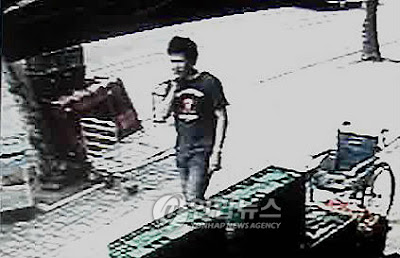 CCTV shot of the suspect. (From here).
Police have made public an image taken from CCTV of a man suspected of raping a 7 year-old girl on June 26 in Dongdaemun. As the Joongang Ilbo describes it,

The suspect, who is assumed to be in his 30’s, allegedly found the girl playing in the street by herself in her neighborhood in Jangan, Seoul, at around 12:30 p.m. and approached her on his motorcycle saying, “Let’s go play at your house.” After raping the girl, the man took off on his motorcycle with roughly $200 worth of gold rings and 10,000 won in cash he found in the apartment. The girl was later found crying outside the apartment by a neighbor, who called her mother. The girl’s father was the first to arrive on the scene and called the police at 1:04 p.m.

Police at the Dongdaemun precinct said the girl was brought to a hospital an hour after they received the father’s call, but she did not require surgery. The victim was born in Vietnam. Her parents came to the country five years ago and have been residing and working in Korea since.

Dongdaemun police doubled the reward for useful information to 10 million won ($8,150) and printed out an additional 50,000 posters with the suspect’s composite sketch, based on a description by the young victim, to distribute nationwide after 16,000 were distributed in the Seoul area.

This is just one of many rape or molestation cases involving children which has been in the media lately. In early June, an 8 year old girl was snatched from a school near Yeongdeungpo Station and raped, resulting in an outcry which led to the passing of a bill allowing chemical castration last week.

On June 25, a Busan court handed down a death sentence to Kim Kil-tae, who raped and murdered Lee Yu-ri in February. Much more needs to be said about the Yeongdeungpo and Busan cases, but that will have to wait.

A 60-year-old man accused of molesting two sisters, aged 9 and 10, for nearly a year has been acquitted by the Seoul Western District Court, which ruled that he was mentally unsound.[...] According to the girls, Noh fondled their chests and legs in a narrow alley on their way home from school, at least twice a month - over 30 times in total - starting in July 2009. Noh initially told the police after his arrest, “I could not help myself.”

On July 1, another rape occurred in Daegu:

Police in Daegu, about 300 kilometers southeast of Seoul, said Friday that a massive manhunt was underway for a man suspected of raping a 13-year-old girl at her home in broad daylight.

The suspect, believed to be in his late teens or early 20s, broke into the girl's house, where she was staying alone after school, Thursday afternoon and raped her, according to officials at Dalseo Police Station.

On Wednesday it became known that an American English teacher at a school in Daegu had been accused of molesting several male students, but fled the country before he could be arrested.

Another case that came to light at the same time took place in Gwangju, where a 50 year old elementary school teacher was suspended from work after 5 students came forward saying they had been molested by the teacher, with police seeking an arrest warrant for the man.

While it may seem like Korea has been beset by an incredible number of sex crimes against children over the past month, this editorial is revealing:

With this latest in the recent series of sexual assaults of young girls, we have pushed another innocent girl into an insurmountable ordeal by ignoring the ardent appeals of those who have been victimized before her.

According to statistics, 1,017 children under the age of 12 and 1,447 teenagers between the ages of 13 and 15 experienced sexual violence in the last year alone. [Emphasis added]

I found that comment about the "recent series" of sexual assaults interesting, especially considering the statistics in the next paragraph. Put simply, if 1,017 children and 1,447 teens (between 13 and 15) are victims of sex crimes every year, that adds up to 3 children and 4 teens between 13 and 15 being victimized every day (on average). There is not a "recent series" of such sexual crimes - this is always happening. It's just that the media has decided - as it does whenever a particular case angers people - to highlight these cases, which would usually either not be covered or covered by perhaps only one or two media outlets, and which are now linked together in articles in order to point to a great problem that exists. To be sure, there have been several laws passed since the murder of Lee Yu-ri in March (and the Yeongdeungpo case in June), and it's great that the issue has finally gotten enough attention to get things moving (see here for a brief history of the slow pace of change since 2006). I'm not entirely sure that the solutions being offered are always the best ideas, however, and public fury (and worry) whipped up by this media coverage may be putting pressure on politicians to act first and think later. I'll save a more in-depth look at this for a later post.
Posted by matt at 9:33 AM

Hi.
My name is Sean Kim, and I am Director of Huijun Communications(www.huijun.co.kr). I came across your blog on social issues in Korean, and I was inspired by it.

Due to strict Korean Immigration laws that do not allow foreigners to have side jobs, or start their own businesses, it is hard to find good websites where people can find all information and services they need.

At Huijun Communications, we are currently in the works of creating a website that serves as a hub and a community for foreigners living in Korea. At the moment, since we are at the beginning stages, we are just trying to gather more information on entertainment news and living in Korea. We want to make life easier for other foreigners living in Korea, and our vision is to eventually create a website where people can get all info and service they want through this website without need of searching and looking here and there, and through which people communicate with Koreans also.

And we have staffs and finance to make this happen.

I was thinking your blog/website would be a great asset for us, and I was wondering if you would be willing to post your blog entries on our website as well. It will allow you to have a chance to share your thoughts and info with members of lifeinkorea.kr and all members of lifeinkorea will appreciate you for that. If that is not workable due to your schedules, please allow us to bring your articles to our website. We will make sure the source and author of articles appear in our website.

We plan to find ways to realistically benefit enthusiastic writers like you.
Depending on the depth of your interest, we can consider giving you a dedicated section or sub category in our website.

Please feel free to check our website beforehand (www.lifeinkorea.kr). The current design will be changed totally.
A whole new design for the website is on its way (attached design draft)

I have a strong belief that this website will be a center of all people living in Korea.
If you have other proposal in your mind, please feel free to contact me any time at skim@huijun.co.kr or call at 010-9088-6212.

Your prompt reply is highly appreciated.

Don't mislead people. Foreigners ARE allowed side job PROVIDED they have permission from both Immigration and their primary workplace.

To say they CANNOT have side jobs is simply untrue.

o.kaaaay why the hell are the only comment on this post totally off topic?! I mean, really! c'mon people...

This is a very interesting post, and a subject am very interested in as well because the only cases I can put my hands on are either happening in the US (which starts to look like a very frightening place when you read too much articles in one day) or the UK, cases in Japan are also fairly accessible but am more into the korean culture and social behavior, therefor, thank you for highlighting this on your blog.

The statistics are somehow shocking, I mean, since I don't speak korean and therefor can't read the press there (and most articles aren't often translated) personally I would have never guessed it was this frequent for children and teenagers to get molested/raped in such seemingly calm country...now that I think about it, it sounds so candid coming for someone who read so much on the subject. In the end, the country doesn't really matter, sexual predators and pedophiles aren't white people, they are just people, period. Sick people.

I was appaled that the 60 year old walked free because of he was "mentally unsound", what's that even supposed to mean anyway? It doesn't excuse a damn thing, those little girls where molested for a year, he caused them a trauma that is going to last for the rest of their lives, mentally unsound or retarded even, it doesn't make a difference, he should at least be put in institution but not released back on the streets.

It's obviously a good thing that finally both the media and the police are paying more attention to cases like these, their lack of interest and actions on the matter for the previous years might be the reason for such frightning statistics. Maybe now with a sex offenders register and the voted bill of chimical castration the numbers will drop. Parents should also be more careful with their children and ought to instruct them not to speak to strangers, I mean the first case about the 7 year old who actually invited the man in her house 'to play'...that's oh so very wrong, am truly shocked; where the hell were her parents? an adult? anyone! she's 7 years old, that's hardly an age at which she can care about herself on her own.

Thanks again for the article! Hope you'll get to write on the subject again.