One wonders if this film described by the Korea Herald will turn out to be interesting:

When the film adaptation of the popular internet comic “Moss” was announced last year, anticipation for the production was high from legions of loyal fans.

However, that initial excitement soon turned into disappointment when word got out that Kang Woo-suk -- director of such straight forward, mainstream fare as the Public Enemy franchise -- and his Cinema Service production company was taking on the project.[...]

Since “Moss” was noted for the layered storytelling and the cosmopolitan approach with which its author handled the subtext of social commentary, many had doubted the Kang would be able to do it justice.[...]

Anchored in a classic murder mystery, “Moss” tells the story of one man’s journey into the heart of darkness in a small town deep in the backwoods of the Korean countryside to uncover the truth behind his father’s death. It’s a story full of twists and turns seemingly inspired by American southern gothic literature.

When the original series first began its run two years ago online, the 80-part graphic novel became an Internet sensation -- captivating readers with its labyrinthine “whodunnit” plot which was accentuated by the richly detailed illustrations of the decaying village that gave it an ambiance of dread that millions of avid readers praised. [...]

Jung Jae-young, whose casting as the ominous village patriarch garnered just as much criticism from fans said, “My character from the original and the one in the film carry two completely different images.”

Here's how Jung Jae-young's character looks in the comic: 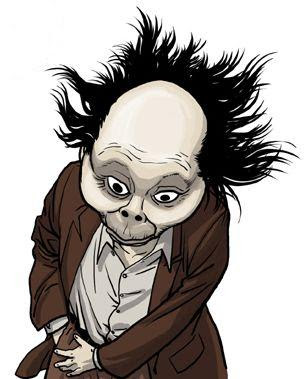 Here's how he looks in the movie: 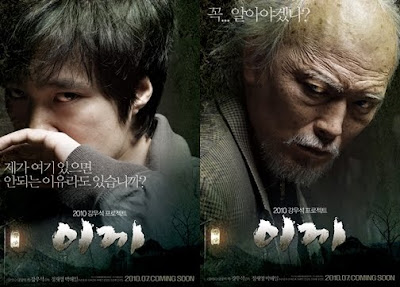 The posters are from this article, which has a few more photos. Judging from the trailer at the film's website, it seems like there's lots of action. One wonders if Kang will be able to make an interesting film, especially since he wants to "overcome" the original. I Still chuckle at the memory of a film producer who was a former student telling me how she tried to dodge the question when Kang asked her for her opinion of Hanbando. The original comic Moss can be read here, and the film opens on July 15.
Posted by matt at 4:05 PM

This comic looks fascinating! Do you know of anywhere I could read it in English?