Hey Hyundai, how are Koreans supposed to cheer with foreigners if you don't invite them?

A weeks ago I wrote about the Shouting Korea campaign, but didn't get around to posting these photos: 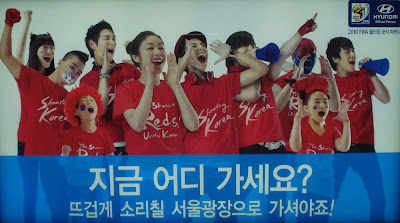 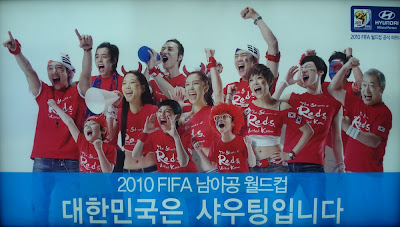 The bottom one might make a great new header...

Speaking of the campaign, when you watch the TV ads, they make much clearer who's behind the campaign. 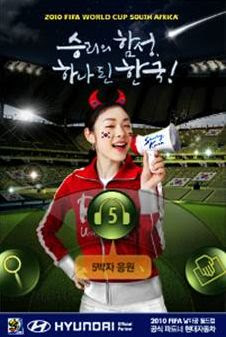 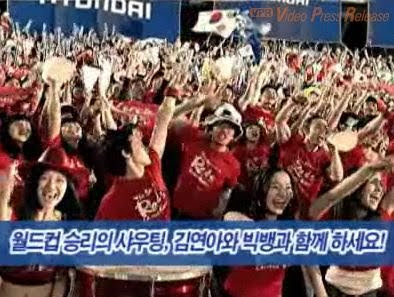 Look carefully, and you might just see the Hyundai logo. The first Shouting Korea ad, a teaser video, can be found here:

One hopes that Motley Crue was compensated by Hyundai, considering how similar the 'drum-drum SHOUT!' part sounds like Shout at the Devil. I have to admit though, I'd rather listen to 80s hair metal than Kim Yuna and Big Bang:

It just gets worse, though. Last time I showed this poster, which describe how to do the 'shouting dance:' 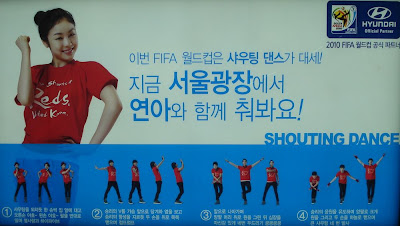 It's even worse when the pictures move and are accompanied by the 'music' above:

Hmmm... manufactured cutesy banal pop music organized by a conglomerate in the name of nationalism. I think if Bill Hicks had lived to see this he would have declared himself to be in hell.

Back to the shouting campaign and the place of foreigners in it:

After watching the Netherlands defeat Brazil Friday night, I noticed something about the Shouting Korea ad on TV, which I found here. 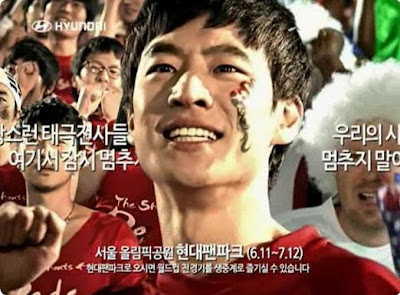 The proud taeguk warriors fighting spirit has been stopped, but... 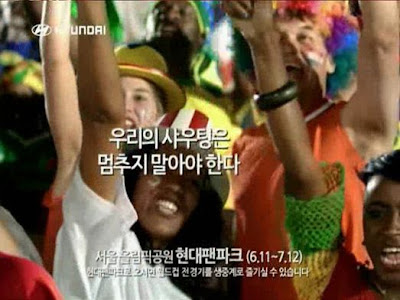 ...we should not stop shouting. 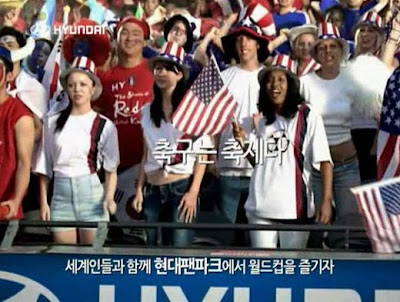 Soccer is a festival.
(Enjoy the world cup at Hyundai Fan Park
with the people of the world) 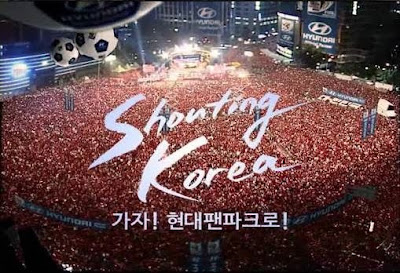 Let's go to Hyundai Fan Park!
Hmmm, with that mention of taeguk 'warriors' and 'fighting spirit,' perhaps that quote about 75% of Koreans believing that “the survival of the fittest is a major principle of contemporary world” was way off. Hold on a minute though - who did I see the Koreans cheering with?

I know I've seen the girl in the bottom right corner before... 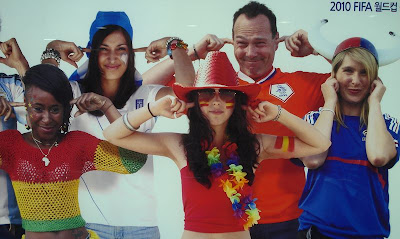 There she is at bottom left. Odd though, I thought the idea was to drown these people out, not cheer with them. What I didn't realize, which a friend pointed out, was that these 'let's cheer with the people of the world (whom we formerly cast as our, y'know, enemies)' ads only appeared after Korea was knocked out of the world cup. Cute. Now that you're no longer a threat, let's cheer together (unless you were cheering for us, and then we already liked you:) 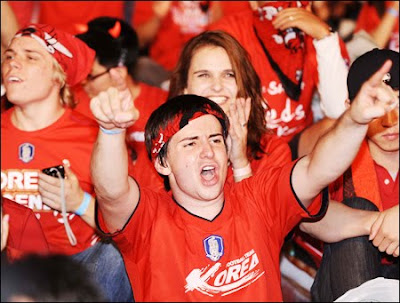 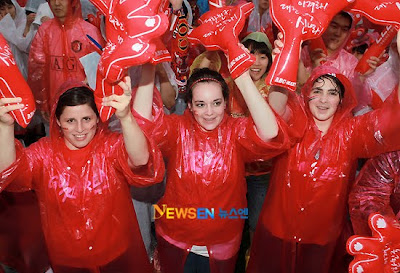 At any rate, now that the taeguk warriors have been sent home (happily with no officiating scandals or bomb threats to embassies) Korean fans can shout along with the people of the world at Hyundai Fan Park. For more information about about Hyundai Fan Parks, let's look at their site:

Well, actually, that's from their British site. If you follow the link from there (or dig around FIFA's site), you'll find this page, which lists all of Hyundai's fan parks, including Seoul's, in Olympic Park. Now, clearly, if this is genuine, this call to cheer with the world's people, and not just a slogan to keep people coming out to Hyundai's turf for "distributing plastic balloons, pompoms and other items... as well as their leaflets and advertising goods" (the source of much of the garbage left over after matches), then I imagine Hyundai has done a lot to advertise the location of this fan park to foreigners in Seoul. Right?

I found no newspaper articles (well, one brief mention of the park's existence) and only one semi-official looking tourism blog in English which mentioned the fan park - and that was so foreigners could cheer at a Korean game. 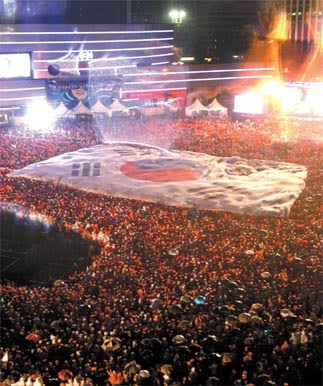 Golly, it's wonderful that Hyundai creates spaces for foreigners to cheer at games in 18 other countries, but it seems pretty clear that in Korea there is only one team to cheer for, and that Hyundai's shouting campaign was a hell of a lot more honest when the role of foreigners was to be drowned out by the patriotic danil minjok or to join Koreans in celebrating their nation[al team].

Mind you, I may have misunderstood all of this. Perhaps the idea was, after the Korean team's ouster, for Koreans to cheer for foreign teams with the people of the world in a purely symbolic sense, in that those teams' fans would also be at other Hyundai Fan Parks worldwide watching the games at the same time. In that case, I can see why there would be no need to involve foreigners actually living in Korea in any of it.
Posted by matt at 9:01 AM

Someone should tell Hyundai their media blitz isn't working.

I didn't one single person doing the shouting dance all summer, not even when they should be cheering their team on.

"...manufactured cutesy banal pop music organized by a conglomerate in the name of nationalism."

You touch on something here that I really enjoy exposing to my students—-a lot of the ultra-nationalism in South Korea today seems to be aimed at the pocketbooks of South Koreans themselves. I often point out how the costs of things that are made in South Korea can be two to three times more expensive in South Korea than when those same products are sent to compete in the open market in other parts of the world. Pride is one thing; paying (literally) for one’s own blind devotion is another.

In some ways this seems to create a chicken-and-egg type question: Which came first, the ultra-nationalism or the ultra-nationalistic propaganda? I suppose that if we knew the answer to that question, we could simply point a finger at someone and say, “He did it! It’s all his fault!!!” Oh, wait…Isn’t that what happens when South Koreans try to say that all this ultra-nationalistic stuff was just learned from the Japanese? And isn’t that the same type of scapegoating that occurs ad nauseam whenever anything bad is brought up about South Korean character? Someone else did it to them. It's not their fault. But, isn’t that another example of making the violator the victim? The “…pity us because we are too weak to defend our superior culture…”

Just some food for thought...

You can find effective, permanent treatment at Inch'on Int'l Airport.

Darth Babaganoosh:
I hadn't noticed anyone doing that dance either. If I remember correctly, a similar dance was promoted in 2006, which no one was much interested in.

louve9:
Good point about wallets being targeted. It's gotten worse over the years (well, 2006 and 2010) at the world cups, with commercialism becoming more rampant (as is to be expected). As far as mass participation in nationalist feeling, I'd imagine the propaganda came first - but it's a tough question when you ask it about the propagandists themselves (people like Shin Chae-ho and Yi Kwangsu) who were both influenced by the west/Japan and also reacting to them (especially Japan). Didn't get a change to reply on the last post, but thanks for leaving the links to the sources - it was very helpful (as always).

King Baeksu:
Sounds like you're having fun in China...

hehe, i told my h.s. students if they dared shout around me, I would find a new place for their textbooks. Theyre such good boys.