The Joongang Ilbo tells us that

in their effort to rebuild Sungnyemun, which was originally erected in 1396, experts have discovered the original foundation stones, which date back to the early period of the Joseon Dynasty. [...]

From a comparison of Sungnyemun blueprints from the 15th and 17th centuries, experts discovered that the ground around the gate had risen roughly 1.4 meters (4.6 feet), obscuring the foundation stones.

This isn't the first time excavations around Namdaemun have been made public. The picture accompanying the Joongang Ilbo article, like the one below (from here) doesn't quite make clear how deep the excavation is. 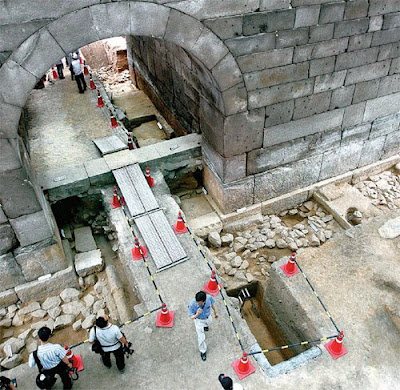 This photo, however, does: 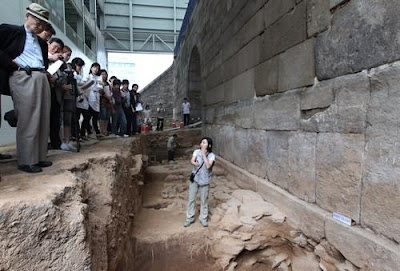 I couldn't see this photo (from here)... 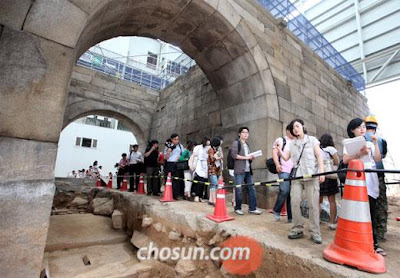 ...without being reminded of this one, from when Namdaemun's doors were opened for the first time in a long time in 2006: 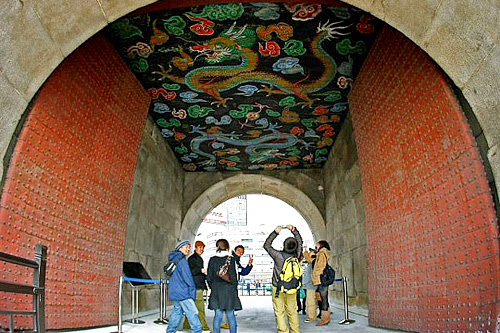 One wonders how well that painting survived the fire. At the time of the opening in 2006, the city tried to sell it as the 'first time the doors had been opened in 99 years,' but subsequent inquiries proved that figure to be off by at least 50 years. Also worth noting from the photo above of the roofless base is that reconstruction seems to be going rather slowly.
Posted by matt at 8:55 AM