When I saw the title of this Korea Times article by Robert Neff the other day, "Emperor's secret letter over protectorate treaty," I assumed it would tell the tale of Homer Hulbert's futile attempt to convey a letter from Emperor Gojong to the U.S. in order to get America to help Korea in 1905. In the end, he was ignored by the state department for a few days until the anticipated protectorate treaty was signed, allowing them to wash their hands of Korea. A fairly detailed telling of this story can be found in Frederick McKenzie's Korea's Fight For Freedom (this section of the book tells the story of the signing of the protectorate treaty - do a page search for 'Hulbert' to jump to the story of his mission.)

Instead, Neff's article looks at the story of Douglas Story, a well-known war correspondent who came to Korea in early 1906 to see if rumors that the protectorate treaty was illegitimate were true:

It was while he was at one of these homes that a member of the palace arrived at 4 a.m. and presented Story with a message from the emperor. In order to avoid its interception by the Japanese, the servant had smuggled it out of the palace hidden in his baggy trousers.

The message, which was dated Jan. 29, 1906, declared emphatically that the emperor had not signed or approved the treaty with Japan. Furthermore, the emperor "invite[d] the great powers to exercise joint protectorate over Korea for a period not exceeding five years, with respect, to the control of Korean foreign affairs." The message was signed with the emperor's own seal.

Realizing what he possessed, Story confided in a fellow European, possibly Ernest T. Bethell ― the editor of the Korea Daily News. He then copied the letter, sealed it, and left it in a safe spot. He then returned to his hotel only to discover that his room had been ransacked and his personal belongings searched, presumably by the Japanese secret service. This was not an uncommon occurrence.

The rest of the article tells of how Story managed to smuggle the letter out of Korea. Mention is also made of Thomas F. Millard, a correspondent for the New York Times whose post-protectorate treaty articles from 1908 about Korea are well worth reading (and looking at for the photos). Links to pdfs are below:

"JAPAN'S REAL ATTITUDE TOWARD "THE OPEN DOOR"; Administration of Korea an Illustration of the Methods by Which Japan Seeks to Crowd Out Competitors and Secure for Herself a Monopoly in Business." May 10 1908. [Link]

"High-handed Methods by Which Japan Has Seized Every Office of Administration and Left Koreans a People Without a Country." May 17, 1908. [Link]

While much has been made of the protectorate treaty, it seems clear now that Korea had, for all intents and purposes, lost its sovereignty when thousands of Japanese troops poured into Korea at the beginning of the Russo Japanese War in February 1904. 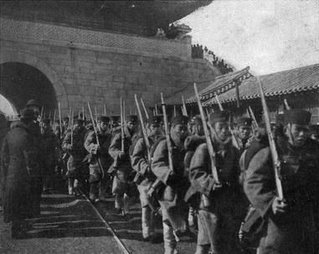 On February 23, 1904, after holding out for a week while soldiers surrounded the palace, the Korean cabinet signed a treaty of alliance with Japan which allowed transit to Manchuria, rights to build or complete railways from Busan to Uiju, and the right to occupy strategic points in Korea should encroachment by a third Power or an internal disturbance necessitate it. In addition to this agreement, another agreement in August, 1904, allowed the Japanese to place advisers of their choosing in the ministries of foreign affairs and finance, making it quite clear that the protectorate treaty of November 1905 simply made official the control over Korea that Japan already had.
Posted by matt at 3:35 PM