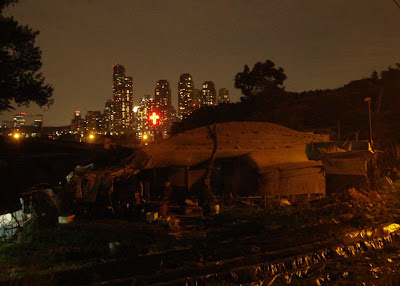 Above is a shot of a house in Guryong Maeul, with the Tower Palace, Korea's tallest building, in the background. This article has more information about the village:

Located at the foot of Mt. Daemo in Gaepo-dong, Guryong Village is one of the largest unlicensed shack clusters. Currently, some 1,300 households are in the village of about 491,000 square meters, according to the local district office.

The village was created around 1988 when the government removed illegal houses under redevelopment projects ahead of the Seoul Olympic Games. The people who lost their houses were driven into the village and built their shacks on private land owned by others. [...]

These unregistered houses don't have addresses and mail doesn't reach them. The residents pay their water and electric bills together and share toilets. 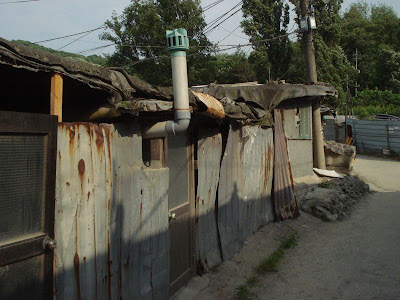 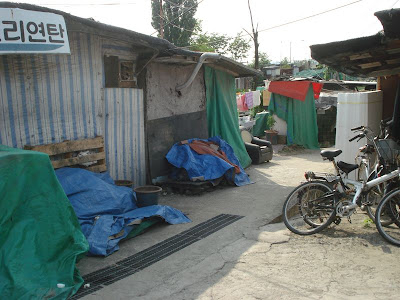 The village may be redeveloped at some point in the near future, as the rest of the article notes. At the moment, a year after the article was published, it's still standing.
Posted by matt at 9:36 AM

Hi, I'm making a documentary about Korean gardens and allotments, and specifically about the tenacity of Korean people and their ability to use even the most unusual or unpromising site to grow things on. This post made me thing you might know of some good locations. If you are able to help or have any questions, please send an email to stablez@hotmail.com.
Your blog is fantastic by the way.
Best
Ed

FYI: Tower Palace was not the tallest building in Korea when this was written; it's that tower over in Mokdong.

Actually the Mok-dong Hyperion Tower is only 256m - the Tower Palace is 264m.