In 2000, Hong Seok-cheon became Korea's first openly gay celebrity. After coming out, however, he was fired from his broadcasting jobs in TV and radio. This November 2000 article about Hong also interviews gay rights activist Seo Dong Jin, who

was nearly kicked out of the elite Yonsei University a few years ago for organizing a support group for gay and lesbian students. In 1997 he tried to convene a gay film festival, but local authorities cut off the electricity. The Queer Film and Video Festival only got the green light in 1998 after censors relaxed their conditions.

By 2005, however, a gay couple was featured in a TV advertisement, and in 2006 Korea's best selling movie ever at that point (12 million tickets, meaning 25% of the population saw the film in theatres), The King and Clown, was also its biggest surprise hit - especially considering that the drama centered around a clearly gay relationship. 2006 also saw the release of a film aimed at teens which featured transsexuals, transvestites, and gay characters [Dasepo Girls], and another Joseon-era film released in 2008, A Frozen Flower, featured a gay love triangle and was a moderate hit.

An openly gay couple is now focused on in a TV drama for the first time, SBS's “Beautiful Life,” and in this May 29 interview with the writer of the series, Kim Soo-hyun, she makes clear that her "main goal is to make homosexuality a subject that is no longer taboo." As this article notes, "Its viewer ratings exceeded 20 percent on May 23 when the two came out of the closet, pointing to Koreans’ growing interests in the once-social taboo." Not everyone is happy with this, however:

With more soap operas and other entertainment programs shedding light on homosexuality, conservative religious groups have begun stepping up on criticism against what they call the “glamorization of gays and lesbians” by TV program producers seeking to draw a larger viewership.

[According to t]he Korean Association of Church Communication (KACC) ... “Everybody knows that homosexual relationships are ‘not a social norm.’" The organization then said it is not right for the society to generalize and approve homosexuality, stressing that a series of recent TV programs have overly beautified gays and homosexual love, negatively affecting the acceptable growth of adolescent sexuality.

“The problem with soap operas featuring gays is that homosexuality concerns only a small number of individuals. Most of us have nothing to do with it,” KACC spokesman Shim Man-sup said. “Gays can pursue their own lifestyle privately. But when homosexuality is highlighted and glamorized by TV programs, it not a private matter anymore. Broadcasters must stop commercially exploiting the issue for the common good.”

I hope they start complaining that many dramas glamorize wealth and greed, since living in mansions "concerns only a small number of individuals." But then, considering most protestant ('Christian') churches here require that their members pay tithes amounting to 10% of their income, I doubt they have many concerns about widespread avarice.

The Constitutional Court is expected to soon decide whether Article 92 of the Military Law stipulating the punishment of homosexual soldiers is a violation of their constitutional rights. [...]

Jeong Yol, one of the handful who came out of the closet, said he was tormented by the military which has defined homosexuality as a mental disease. "I was sent to a hospital where people beat me, mocked me and ordered me to harass a man," he recalled. [...]

There have been several unsuccessful attempts to overcome such obstacles here. In 2006, gay riot police officer YuJung Min-seok refused to return to his post after a month of holiday, claiming that the masculine and oppressive military culture was offensive to him. In 2008, another riot policeman Lee Gye-deok requested the Ministry of National Defense to remove him from the riot police squad because the "heterosexual-dominant culture has constantly suppressed gay staff members."

One hopes the Constitutional Court makes a humane decision, but in the past conscientious objectors have been ruled against because national defense is considered to be of overwhelming importance. At any rate, the fact it is being considered by the court is a good sign, and you would think that, since movies and television shows depicting gay relationships have become more numerous, and some have been popular, that Korean society is becoming more accepting of homosexuality.

According to the 2007 Pew Global Attitudes Survey, Korea's results on this topic were the opposite of what I expected: 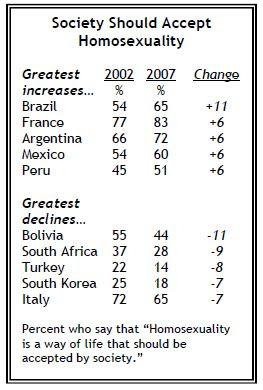 According to this survey, support for homosexuality in Korea dropped 7% between 2002 and 2007, during a time when the best selling Korean film at the time featured a clearly gay relationship. Perhaps the backlash expressed by the churches above is felt by more people that expected; I'd be curious to see the results in the next survey.

With this regression in mind, I post this message from the Amnesty G48 chapter of Amnesty International Korea:

This year there will be a parade in downtown Seoul at 4:30 pm on June 12, 2010 to mark the 11th annual Korean Queer Culture Festival. Amnesty G48, an official chapter of Amnesty International Korea, is calling for people to join its section of the parade to celebrate the message of solidarity with LGBT communities in Korea and demand human rights for all.

The Korean Queer Culture Festival began back in 2000 and has its humble beginnings as a small two-day gathering around Sinchon and Daehangno. It moved to Itaewon and Gwanghwamun in 2002 in order to attract more attention from the mainstream public before settling in its current location, Jongno, in the very heart of Seoul. Over time, participation from a number of organizations and politicians has grown and the event has developed into a 10-day festival with a diverse program.

This year the program offers participants many ways to get involved including parties, lectures, exhibitions, a film festival, parade and many other special events.

*Register to join Amnesty G48’s LGBT Solidarity section of the parade at its Facebook page.

For further reading, Korea Beat's Gay and Lesbian Life in Korea category is worth checking out.
Posted by matt at 3:36 PM