An 8 won kick in the teeth 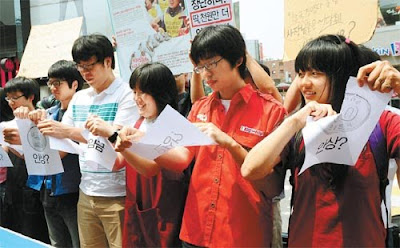 From the Joongang Ilbo:

Students and members of People’s Solidarity for Participatory Democracy rip up signs of a 10 won ($0.01) coin to protest a proposal by employers to raise the minimum wage by 8 won. The protest, held in Daehangno, central Seoul, called for a rise in the minimum wage by 1,000 won to 5,100 won.

What an insult. To put that into perspective, after working 60 hours - two or three weeks for a part time worker - they'll be able to afford an extra samgak (triangle) kimbap. Wow.

Foreign workers earn far less than Koreans with their average paycheck lower than that of the bottom 10 percent, a government report says. A more chilling fact is their meager wages are not increasing.[...]

According to the findings by the National Tax Service (NTS), the average annual wages of a foreign worker last year who paid income tax was 13.17 million won - a decrease of 2.9 percent from the previous year's 13.56 million won.

The annual paycheck of the "bottom 10 percent" of a South Korean worker was 14.60 million won, the government agency said.

What a way to treat such a valuable resource.
Posted by matt at 1:23 PM

Well done on the protest.

I hear, Koreans won't do 3D jobs. I think they will, they just won't do it for the poor salary offered.