The other day I posted this photo of two cars on display at Line 9's Express Bus Terminal station and wondered how they got there: 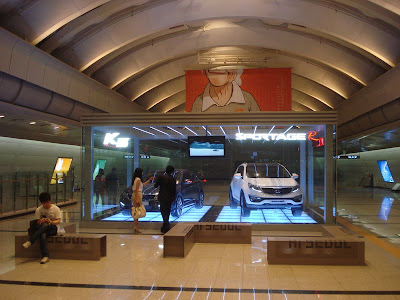 As it turns out, Brian left a comment linking to a Donga Ilbo article with the answer. It notes that this is the first time cars have been displayed in a subway station in Seoul, and people were curious as to how they got 4 stories underground. As it turns out, on May sixth Kia got Metro 9 to allow them to take a special train with freight cars and brought the cars disassembled into pieces small enough to fit through the sliding doors (and to be taken up the escalators). They had only a window of three hours from 1:30 to 4:30 am, and it took them 5 days in total to move and then reassemble the cars in the station. Pretty nifty, but it seems like a lot of work just to advertise a car. On the other hand, I'm sure it involved just as much effort and money as filming a TV commercial would. I wonder if we'll see more of this type of thing (though most stations are not as large as Line 9's Express Bus Terminal station). Just for fun, here's a shot of it two years ago, as it was being built: 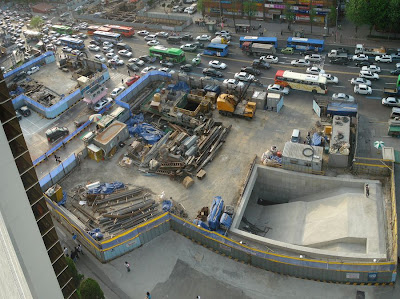 That is cool. Thanks for looking into that.

You know, I often use that station and I always pass by that car and to be honest, I never even thought to myself, "Wow, how did they get that down here." (And most people don't seem to care either.) Goes to show how long I've been here...ha ha.

By the way, cool pic of the construction.