The story of Dr. Ernst Kisch 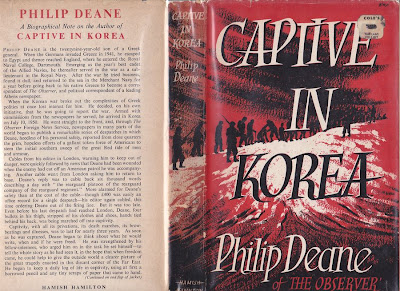 I picked up Philip Deane's 1953 book Captive in Korea last summer at a used bookstore in Montreal, and am glad I did. It's a well written account of Deane's almost three years in North Korean / Chinese-run prison camps during the Korean War. Here's one excerpt that has stayed with me since I first read it:

Of all the tragedies of this internment Dr. Ernst Kisch’s was, perhaps, the most ironical. Until the Anschluss in 1938 he had been a fashionable physician in Vienna. His was a brilliant clientele of people, who liked his knowledge and ready wit. And then he found himself forced to wear, sewn on his clothes, the yellow star that marked him as a Jew. He was put in Dachau, and afterwards in Buchenwald. In 1939, some friends – diplomats – managed to get him released. The tired, almost broken man, was offered employment in the Shanghai Methodist Hospital, from where he went to the American Methodist Hospital in Kaeson[g], right on the 38th Parallel in Korea.

At five a.m. on the morning of June 25, 1950, North Korea tommy-gunners jumped into his room and dragged him, in his underwear, to the prison. There he found other members of the American Methodist Mission. All day, as is the rule in Oriental gaols, Dr. Kisch was made to squat. He was shouted at, starved, and taken to the lavatory only once a day. Then, packed into a cattle truck with so many people that one could sit only with legs drawn up right under the chin, he was made to wait for days in Seoul station, forbidden to get out, even with United Nations planes strafed the sidings. Miraculously he was not hit, and arrived finally in the dilapidated school where he treated me. Dr. Kisch’s country, Austria, is not a member of the United Nations. Even in the times of her empire, she had never attacked Korea in any way. Dr. Kisch, who for a pittance had devoted his skill to the service of the Koreans, who had been imprisoned by the Nazis for being a Jew, was now imprisoned because he was not a communist. During the captivity his greatest hardship, he said, was not being allowed to use his knowledge in curing anyone. Dr. Kisch, who survived Dachau and Buchenwald, died of starvation in North Korea.

What a sad way to die after surviving the German camps.
With his extraordinary fate, I was hoping there'd be something on the man in German somewhere on the web, but a search brought up nothing.