The name of this August 25, 1984 Kyunghyang Shinmun article, from a column titled 'Our Language', is 뇌꼴스런 얼굴, or "sickening/ detestable/ loathsome face," and suggests how this term can be used. For simplicity I've chosen "Sickening Face." One wonders what its writer, reporter Oh Dong-hwan, was on when he wrote it. Many thanks to Song Joosub, Ben Wagner, and others for the great deal of help that was needed to translate this.

Also, I just noticed now what the picture in the article is of: two people - one of them a big-nosed man - kissing. 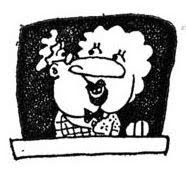 A disgusting and sour expression that itches

A Parisian dishwasher living in Lyon ended up flying to Korea. Because he was a French person who spoke French well, he was invited to work as a hagwon instructor.

A maiden from a distinguished rich family enamored with the foreigner’s exotic outward charm married the Parisian dishwasher, and this made him a rich man overnight.

Indeed such a thing was reported in a Le Monde article a few days ago. Other Parisian dishwashers, shoe shiners, and car washers are calling en masse the Korean embassy in France. In the end, Parisians are flocking like a cloud [to Korea].

The face of the maiden from a distinguished rich family, though being a person who does not know to write even a simple letter to her home country, performing the “act of marriage” whispering in French, is a “sickening face.” A few days ago there was a case of adultery. Looking at them, the laughing face of a person who can’t laugh is also a “sickening face.” Only a hermaphrodite could laugh confidently, perhaps.

Take the case of animals. [Only] when looking at how a male Atlantic football fish parasitizes a female, or when asexually-reproducing hermaphroditic species such as earthworms, sea sponges, and snails look at sexually-reproducing, impudent vertebrates is laughing possible.

What about a sea urchin? Because of its chestnut-shaped burs which make it impossible to 'toast' or copulate, the male discharges his spermatozoa in the water and try to dock them with the female’s eggs. A sea urchin would laugh when imagining those adulterous man and woman. But sea urchins have a mouth on the bottom and an anus on top. This makes one convulse with laughter. However, if there were an anus on the back of the head, where its mouth is located, it would be terribly funny.

Consider a starfish. Even though it has an anus, it rarely uses it. It would just laugh while it digests in its mouth food that could pass through its anus. Such laughter is “a sickening face” – like that of the rightly ridiculed man who ridicules in response.

We've seen the portrayal of the 'shiftless vagabond from France who teaches language and lives well in Korea' evolve in the August 21 Donga Ilbo article "Jibberish" and in "Sickening Face." As 'Jibberish' told us, "There was one penniless “French” young man. He was from “Lyon”. There he was a restaurant delivery boy." Note that the Le Monde article makes no mention of Lyon or restaurant delivery boys - these were made up by the Donga Ilbo. That article also mentions that this "French" young man came to Korea with only a "shabby suitcase" and that he "married a respectable Korean woman," which combines the stories of Luc and Pierre as told in Le Monde.

Now, in "Sickening Face," we're told of "A Parisian dishwasher living in Lyon [who] ended up flying to Korea." Lyon appears again, but this time the "French" young man is a dishwasher instead of a restaurant delivery boy. The intent is the same - to portray him as lowly as possible so that he is seen as being unworthy of marriage to a "maiden from a distinguished rich family." It also relies on the "Korea treats these foreigners too well" theme, as well as the "lucky foreign bastard" theme in portraying him as having a leg up because of his "exotic outward charm" and his mother tongue and also describing this marriage as having "made him a rich man overnight" - a theme seen in these well-known anti-English teacher comics (click on the first result). It also mentions that "Other Parisian dishwashers, shoe shiners, and car washers are calling en masse the Korean embassy in France," an obvious reference to this Joongang Ilbo article. The only problem is that the examples given in that article were of people who were all qualified to teach. At any rate, the reader should fear that more nice, rich girls are going to marry the 'French wave" of dishwashers, shoe shiners, and car washers about to wash over the peninsula.

As for how the writer feels about this, one need only look at the way the article moves from the story of the marriage between a foreign dishwasher to an adulterous couple, to "sickening" examples of hermaphrodites, fish species where the males parasitize females, " sexually-reproducing, impudent vertebrates," talk of anuses in strange places and wicked servants. It's interesting, however, that the last example he mentions is of "ask[ing] questions of sheep in wolf’s clothing." Since they are sheep, they aren't as dangerous as they're made out to be, and can be dealt with, something a Joongang Ilbo editorial had called for the day before "Sickening Face" was published, and the next translation to be posted in this series.
Posted by matt at 9:39 AM

I have to admit this article has always been one of my guilty favorites. The image is also worth a closer look at.

It's definitely hot in here, to use a popular phrase. Not hard to see where the current distaste for foreigners comes from. Way too many culturally loaded metaphors in there to make total sense, but I get the gist. Only something sexless could not be revolted at the marriage of Korean maidens to French dishwashers. And the writer wants an anus on the back of his head.

That sounds almost like it came through Google's translator. Way too much backstory required for me to grasp immediately. :/

Surely, the media have improved in the past quarter century? (sarcasm off)