An August 29, 1984 Korea Times article looks at the foreigners caught working illegally during the first six months of 1984 (the article is transcribed below the scan): 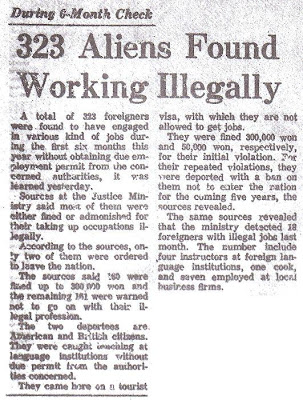 A total of 323 foreigners were found to have engaged in various kinds of jobs during the first six months this year without obtaining due employment permit from the concerned authorities, it was learned yesterday.

Sources at the Justice Ministry said most of them were either fined or admonished for their taking up occupations illegally.

According to the sources, only two of them were ordered to leave the nation.
The sources said 160 were fined up to 300,000 won and the remaining 161 were warned not to go on with their illegal profession.

The two deportees are American and British citizens. They were caught teaching at language institutions without due permit from the authorities concerned.

They came here on a tourist visa, with which they are not allowed to get jobs.

They were fined 300,000 won and 50,000 won, respectively, for their initial violation. For their repeated violations, they were deported with a ban on them not to enter the nation for the coming five years, the sources revealed.

The same sources revealed that the ministry detected 18 foreigners with illegal jobs last month. The number include four instructors at foreign language institutions, one cook, and seven employed at local business firms.

On the one hand, the fact that the two people deported were language teachers is interesting; on the other hand, it seems that after they were given a warning and fined they kept teaching anyway, making them more likely candidates for deportation. What's clear is that there was already concern about unqualified foreign language teachers (taking jobs from Koreans, as the rationale went) and a new law passed in November 1983 restricting their activities had just come into effect a month and a half before the Le Monde article was published. 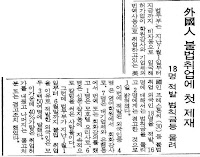 On September 1, the Maeil Gyeongje reported on the foreigners uncovered by immigration working in Korea illegally over the past two months, since the new law came into effect.

The Ministry of Justice revealed today that in July and August, 18 people were uncovered working illegally in Korea, such as hagwon instructors or people doing translation for small companies without proper visas like Preston (30), an American. Of these 16 were fined and two were given warnings.

Among the foreigners uncovered, four were conversation instructors at language hagwons, seven taught conversation and did translation for large companies and banks, one was a cook at a hotel, and six had been writing columns continuously for newspapers or magazines.

As well, the Justice Ministry revealed that from January to June the number of foreigners uncovered working illegally amounted to 350 in all.

Among these, around 40% were given permission to work and the rest received notices or warnings.

Needless to say, more than 350 foreigners are caught working illegally in Korea today, and they certainly don't get permission to work or receive warnings.

It's curious that the Ministry of Justice showed enough interest in such a small number of foreigners being uncovered over a period of only two months to make an announcement about it, especially considering the number was so small in comparison to those discovered over the previous six months. When one realizes that most of those caught were teaching or translating, actions that had come under scrutiny in the media over the previous two weeks, another reason may present itself. That said, while it's possible the Ministry of justice was hopping on the anti-vagabond foreign teacher bandwagon, they may have just been simply reporting on the results of the new law that had come into effect on July 1 (hence the two month period the foreigners were caught in from July to August).

It still seems like a rather short period, however and so I am still rather suspicious of the timing of the announcement. At any rate, the bill that came into effect in July does not seem very punitive, judging by these reports. However, as a result of the negative media coverage of foreign language teachers in the last half of August 1984 - fallout from the Le Monde article - even more restrictions in the form of teaching visas being tied to sponsors would soon be introduced.
Posted by matt at 8:58 AM