수사반장 (Susa Banjang, or 'Chief Investigator') was, as this site at MBC explains, Korea's Columbo, a detective show focusing on 5 detectives that ran from 1971 to 1989. Here's the opening:

Another video can be seen here. If you have an MBC membership (ie if you are a Korean citizen) you can watch the 33 episodes that MBC still has in its possession at the website, which also hosts photos like this: 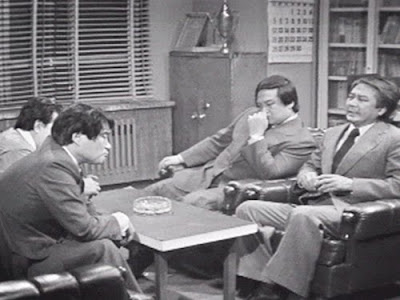 On September 27, 1984, in its TV section, the Joongang Ilbo listed the description of that night's episode of Susa Banjang: 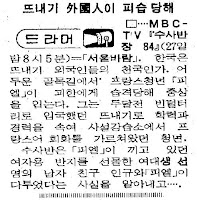 MBC-TV “Chief Investigator 84” (8:05 p.m. on the 27th) = "Seoul Wind." Korea is a heaven for foreign vagabonds. French youth "Pierre" is injured after an attack in a dark alley. Two months earlier, he entered Korea as a penniless wanderer and used fake documents to con his way into teaching French conversation at a private school.

The investigation squad discovers the truth about the quarrel between Pierre and In-gyu, the boyfriend of university student Sun-young, who gave Pierre a ring.

On the same day, the Kyunghyang Shinmun added this:

Based on a report the investigators received, they begin an investigation to discover the truth behind an argument Pierre had with a young woman who was introducing students to him in return for sharing his earnings. Also, the investigators notice a woman’s ring on Pierre’s hand…


Here, with the story of 'Pierre' (the name taken from the teacher in the Le Monde article who married a Korean maiden) entering Korea as a "penniless wanderer" (a reference to Luc in the Le Monde article), we have at last a crystallization of the Korean media's attitude towards the spectre of unqualified foreign teachers who are treated too well, make too much money and marry Korean maidens. What is one to make of the fact that the teacher in this story is beaten in an alley?

Two foreigners without acting experience will appear on MBCTV’s ‘”Chief Investigator” episode “Seoul Wind”. The performances of German Cultural Center teacher Bernhardt Kubant (?) [Bernhard Quandt; thanks Liancourt] and US Air Force pilot MacMillan will be seen in the drama.

Director Kim Seung-su commented that, "I’ve tried to bring to light the problem that has arisen regarding Koreans’ blind, reckless kindness" and said that the two foreigners’ performances were as good as those of established actors.

Interesting that in trying to bring attention to "Koreans’ blind, reckless kindness" towards foreigners, the producers used two 'unqualified' foreign actors. This story has an unexpected ending, however, as a Joongang Ilbo article in its TV section the next day, September 28, revealed: 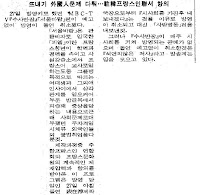 On the 27th, the MBC-TV broadcast of the “Chief Investigator” episode "Seoul Wind," was suddenly cancelled without prior notice.

During production, continual protests by and pressure from a French association and the French Cultural Center were received, and suddenly on the morning of the 27th, the day the program was to be televised, the production director said it was to be replaced with the episode “Love Ward” for the reason that “It will be released after a preview”.

However, it is not common practice for "Chief Investigator" to go through a preview each week and sudden cancellation without warning is a “measure that doesn’t make sense,” according to talk within the broadcasting industry.

It's fascinating that French pressure managed to get the show canceled. As far as is known, it was never broadcast. I would have loved to have seen the show, but Benjamin Wagner checked with MBC and there are no copies of the episode or scripts left. In fact, the only episodes said to be left from the series 18 year run are the 33 up on MBC's website.

Note also the description of the program as being "about the social problem that has recently come to light of the illegal employment of unqualified foreigners on temporary stays." It doesn't sound like this at all, does it? Note also the fact that the female university student "blindly" follows him, much as the director wanted to highlight Koreans' "blind, reckless kindness" towards foreigners. Obviously, we need less blind following of and kindness toward such foreigners, and more beatings in dark alleys.

In case one is wondering if perhaps organizations representing certain nationalities had more influence back then, it might be worth noting that another episode of Susa Banjang, from almost ten months earlier, seems to have aired without a problem.

On December 8, 1983, the Donga Ilbo, Kyunghyang Shinmun, and Maeil Gyeongje all had descriptions of that night's episode of Chief Investigator.

The Kyunghyang Shinmun's article, shown above, also had the title "In love with a young American," and noted that it was Richard specifically who Hwa-suk wanted to marry. Note that this episode was broadcast less than a month after the bill was passed 'banning' foreigners from working in hagwons (as translated in the second half of this post), much as the later (unaired) episode was to come out a week after the new laws banning foreigners from teaching private lessons were announced (and a month after the scandal first blew up).

One wonders if other episodes of Susa Banjang dealt with foreigners, and if such episodes featured the 'bad' foreigners being beaten or murdered in dark alleys like the foreign teachers in these two episodes. I don't think it's too difficult to understand why
Posted by matt at 8:58 AM

The actor is Bernhard Quandt.

Wow - Lee Cham? Head of the KTO? Thanks for pointing that out! I wonder if he remembers this episode...