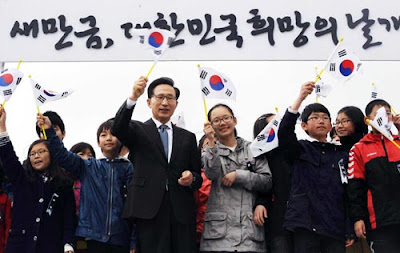 Photo from here.
President Lee went down to Gunsan to celebrate the opening of he Saemangeum Seawall, the longest in the world (which likely explains the flags, not that you need an excuse to wrap yourself in a flag, mind you). I've covered this white elephant before here and here, and as Birds Korea's site notes, the tidal flats were once an important feeding area for migratory birds (some endangered) and complaints by environmentalists managed to stall the project (to some degree) for five years (they weren't allowed to lengthen the walls, but could widen them). The original plan was to reclaim land for farming (this was spoken of even a few years ago - even that the food could be sent to North Korea) but it has since changed to creating a 'tourism hub' and other soju-bender- influenced ideas. Anything to justify the 2.9 trillion won handed out to construction companies to build something that's essentially useless (other than for getting rid of foreign birds and connecting Gunsan and Buan), I suppose.

The Korea Times communicates some of the newest propaganda surrounding the wall in an article titled "33km Saemangeum Seawall to Fuel North Jeolla’s Tourism Growth," Where the wall is described as

the centerpiece of the monumental Saemangeum reclamation project, the world's biggest landfill located in North Jeolla Province, which is currently being developed as a tourism and industrial complex by 2020.

I can think of another failed industrial complex the government has poured millions into - but at least this one isn't in a hostile country.

The local press has been calling it the "Great Wall on the Sea," ahead of its eagerly anticipated opening to tourists. It will be recorded in the Guinness Book of Records this month as the world's longest seawall.

As another Korea Times article points out,

While foreign reclamation projects typically take place in shallow waters, the Saemangeum sea dike was installed in a relatively deep sea - its average height is 34 meters with the deepest point reaching 54 meters, the farm ministry said.

No wonder it took so long and cost so much. The first article continues:

The number of foreign tourists has been on the rise lately, according to regional authorities. Tourists from the United States, New Zealand and China have been flooding to the region ahead of the opening. "Following the seawall inauguration, we expect around 5 million visitors annually," a regional official said. In 2009, around 3 million people came to see the seawall.

I have my doubts they're going to get 5 million foreign visitors annually to the seawall - and they're likely conflating the Jeollabuk-do area with Saemangeum to embiggen their figures. One imagines the foreign tourists peak in April or May - the time of the Jeonju Film Festival.

We're also told that Korea will get 401 extra square kilometers of land (so that's why its being done - it's a peninsula enlargement operation!), that the area will house "an international business complex called the Saemangeum-Gunsan Free Economic Zone," and that "Resorts and theme parks will be added to Saemangeum in the coming years." Hopefully it will include a museum showing how horrible the area was before, including a recreation of downtown Buan where everything, from cars to phone booths, is covered in guano and Alfred Hitchcock's The Birds plays on screens in the background. To see existing 'It'll be good for the birds!' propaganda, have a look here. 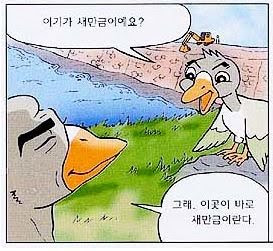 This is slightly different than the images presented at Birds Korea's site: 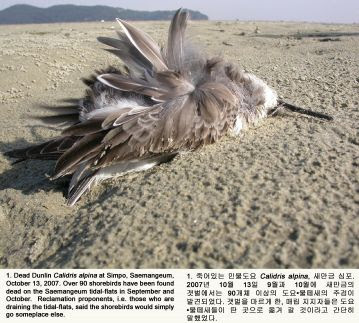 Then the Times article ends by pointing its finger at foreigners for hindering Jeollabuk-do's development:

Often considered one of Korea's most underdeveloped regions, North Jeolla is the only province in the country without an international airport. Rather than building a new one, regional authorities have been trying to expand runways at Gunsan Airport to allow international flights, but objections from the resident U.S. Air Force has hampered the province's plans.

Not just foreign birds, but foreign airplanes are getting in the way! Aigo! 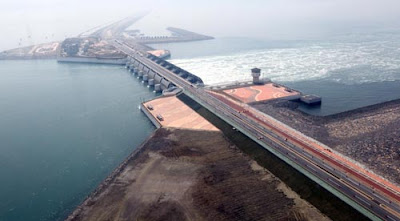 The Joongang Ilbo also paints the efforts to build Saemangeum in a poetic way:

Korea’s attempt to wrest 28,300-hectares of new land from the Yellow Sea has reached a major milestone 40 years after it was first proposed by former President Park Chung Hee.

The dike construction was also a battle of men against nature, with the tides sometimes exceeding seven meters, compared to less than 3 meters in the Netherlands. Waves, which can be as high as 11 meters and travel at a speed of more than 7 meters per second, were strong enough to make two- or three-ton rocks "dance like crazy"[.]

Sounds like quite a sight. I can't help thinking a more honest article would have been about the attempts of construction company execs and vote-hungry politicians to 'wrest' a positive spin from a pointless waste of trillions of dollars, but I guess that's why I'm not a newspaper editor.

This coastal area... is home to several previous reclamation projects. A few areas at the mouth of the Yeongsan River, the lifeblood of the fertile southwestern region, were reclaimed since the 1970s, when the country went through rapid industrialization. With more and more paddy fields lost to urbanization, the government worried about a shortage of arable land for rice production and planned the ambitious Seamangeum, which is far bigger than the 11,730 hectares reclaimed at the Yeongsan River, previously Korea’s biggest reclamation.

“The dike construction was going pretty much nowhere from 1999 to the early 2000s, with environmentalists rallying in front of our sites all the time,” said Oh Jin-hyu, a director of Saemangeum Project Office who has been on the job since 1991. Oh himself had to link arms with other Saemangeum workers to block environmentalists from invading the site. The clashes often turned violent with some people ending up in nearby hospitals. “Things were very ugly,” he said, “but the project eventually survived.”

I'm not sure, but I think this article is being told from the point of view of the developers. I think.

Final construction ended earlier this month. And the environmentalists’ input eventually improved the project, said Oh. “Their oppositions prompted the government to invest more to ensure the environmental health of the upper river areas and other neighborhoods,” he said. “They eventually helped our projects a lot.”

Nice job co-opting the environmentalist position. But hey, it's understandable considering Saemangeum "mirror[s] Korea’s own relentless, enduring spirit." As noted above, President Lee was at the opening ceremony yesterday, and Joongang Ilbo reported on what he had to say:

“Domestic investments are not enough to get the best use out of this enormous piece of land, so I have laid out plans to develop it as a global area that will draw visitors and investments from across the world,” Lee said.

This apparently will involve the Netherlands, which "ranks as the third-largest investor in Korea after the United States and Japan," something I didn't realize (the Dutch prime minister seems keen to have the Netherlands play a part in the development). Lee also plans to complete the first phase by 2020 instead of 2030, which fits in with his previous developments such as Cheonggyecheon, which was completed in two years. As he put it,

“Because this state project has been delayed, precious taxpayers’ money has been wasted, and the program has lost its momentum,” Lee said.

Damned environmentalists! Of course, no one's going to say that it was a useless project to begin with, and once billions of won in "precious taxpayer's money" was thrown into it it simply would have been embarrassing to stop it and make clear how much money had been wasted. Better to waste more, complete the damn thing, and push its failure off into the far future. And as the article points out, it was the Lee government who decided to change the outcome of the project into a plan to "develop a world-class international conference, tourism and leisure destination".

Lee said yesterday that the government will invest in transportation systems to make Saemangeum a hub of production and shipping on the Yellow Sea coast. “By improving its link with the bullet train network in the Jeolla region, of which construction began at the end of last year, the Saemangeum area will be equipped with the necessary transportation infrastructure including airports, harbors, railways and highways,” Lee said.

Gee, you'd think there's an election coming up or something. Lee was also sure to link Saemangeum to another pet project of his:

Lee also promised to spend 3 trillion won by 2020 to improve the water quality of the rivers near the area to be clean enough to develop tourism and leisure businesses in the region.

I can't help wondering if this will end up like Korea's ghost airports, which ROK Drop has chronicled here, here and here.
Posted by matt at 3:12 PM

Yellow Sea? I believe you mean the West Sea. It is the West Sea in Korean, isn't it? Why aren't they campaigning to change the English name for THIS sea?

I believe it's both 황해 and 서해 in Korean, but I've never heard anything but 'Yellow Sea' in English. Of course, we know that the Japanese, like the US or foreign English teachers, will never actually do anything to hurt Korea, so they're easy targets - unlike China.