All private lessons by foreigners prohibited

On August 24, in the article Foreigners and Foreign Languages, the Joongang Ilbo had mentioned "pending laws and enforcement ordinances regarding private institutes," which would strengthen qualifications for teaching in institutes, but it was said that it would be difficult to verify foreigners' qualifications, and so calls were made to strengthen the requirements for private institute instructor qualifications. This followed ten days of articles about 'fraud' foreign teachers who had been washing dishes back home and now were making far too much money (and even marrying Korean women!) due to Koreans' "blind, reckless kindness." A law which made it "mandatory for anyone interested in hiring foreigners to work in Korea to select people with qualifications appropriate to the form of employment" had come into effect on July 1, but it seemed vague as to how this selection was to be made, and 18 foreigners were arrested in July and August for violating it. On September 21, the new enforcement ordinance was announced, and this article by the Joongang Ilbo, the paper which started and pushed the 'scandal' along, seems a good place to start. Thanks to Ben Wagner, Song Joosub and others for help with the translation.

The Liberalization of Private Institute Tuition

Private institute fees are to be liberalized, qualification regulations strengthened for institute owners and instructors and those who are unqualified will not be able to teach.

The Ministry of Education and Culture revealed on the 21st that the enforcement of laws related to private institutes will begin on January 1 next year.

This enforcement order, consisting of 15 articles and 8 supplementary provisions, introduces a system for students at private institutes, bans foreigners from extracurricular teaching activities, and greatly strengthens a range of qualification standards for private tutors, while establishing transitional regulations that take into consideration and recognize the work experience of those currently engaged in such teaching.

Tuition fees - which are currently announced by each Education Committee, according to educational facilities, curriculum contents, terms, etc., as classified by region and curriculum – are to be fixed by institute managers under self-regulation.

However, tuition fees for university entrance examination institutes and general/high-school equivalency diploma institutes are to be decided by the Korea Educational Institute Association, and municipal/provincial education committees are to announce the standard fees according to class.

Heads of institutes and instructors must receive a license/certificate from the local municipal/provincial education committee.

The [minimum] qualifications for private institute instructors are to be strengthened from graduates of at least a junior (2-year) college to those who have a certificate/license [acquired] according to educational law and who have 5 years' or more work experience in the appropriate field.

Institute owners must be university graduates or instructor’s certificate/license holders.

Accordingly, from now on, one cannot be an instructor in a non-major field. However, one can become an instructor if trained in a course of study for a designated period of time at a social educational institute, university, or the Korea Educational Institute Association.

Regulations for Numbers of Students

Private lessons are to be covered by the existing regulations. Lessons in general school subjects is prohibited, except for the arts, athletics, or technical studies. Also, instructors must be at least a high-school graduate in the appropriate field; or have a certificate/license [acquired] according to educational law; or have 4 years' or more experience in the appropriate field; or have completed certain courses at social educational institutes or schools designated by the Minister of Education and Culture.

From now on, foreigners cannot provide private lessons, but can be private institute instructors if they are more than junior college graduates.

According to the Additional School Law, Article 6, Clause 1, establishing a place of private instruction or a private institute in the same building as a business that hinders education or within 6 meters as measured by a straight line of such a business is prohibited.

Providing private lessons is limited to only the eup/myeon/dong area within the instructor’s residential registration jurisdiction and to 1 person, 1 subject and 1 institute, and employing instructors is prohibited.

On the same day, the Donga Ilbo had two articles about the new regulations. An article on page 11 has the sub heading "Unqualified Foreigners Cannot Tutor":

Ministry of Culture and Education announced today the legislation and amendments prepared for the enforcement ordinance concerning private institutes. [...]

Also, a provision was created to regulate unqualified foreigners who randomly enter the country. Through the rule that "Private tutors must be South Korean nationals," foreigners cannot teach private lessons and only foreigners who have graduated from at least a junior college and possess a work visa (9-11) can work at private institutes.

An article on page 10 reveals more about the visa:

There is a revision that "Foreigners must be 9-11 visa holders, who need to have at least a Junior college degree." According to immigration administration law enforcement ordinance article 9 paragraph 1 number 11, the 9-11 visa is issued to "persons wanting to work for Korean public institutions and individuals."

Also on September 21, the Kyunghyang Shinmun had two articles about the new regulations. The article on page 1 had the sub-headlines "For Foreigners, Holders of Education Research Visa Only," but contained only two sentences regarding foreigners: "For Foreigners, Only Holders of Education Research Visa are qualified to be teachers," and "Foreigners cannot teach private lessons." Its page 3 story has no sub-headlines mentioning foreigners, and the information is the same as in the Donga Ilbo. 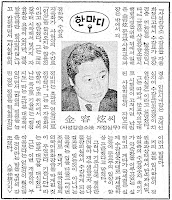 The next day, on September 22, the Chosun Ilbo had an article on page 10 with the sub-headline "Complete Ban on Private Lessons by Foreigners"; the information in the article was the same as other papers. On page 2, however, in an article/column titled 'In a word,' reporter Lee Jung-sik asks Kim Yong-hyeon (pictured at left), who took part in amending the private institute law, about the concerns people have regarding the growing number of students enrolling in hagwons and the lack of space those students, such as jaesu students (those studying to take the university entrance exam again), have in the cramped institutes. Mr. Kim declines to answer the question and he replies instead, "Above all else, I'm happy that through these measures, foreign language conversation classes by foreign vagabonds have been blocked."

The same day the Hanguk Ilbo had an article on page 11 which gave information similar to other papers, with two sub-headlines regarding foreigners: "Notice of Enforcement, From next year foreigners should have an appropriate purpose of employment" and "Foreign Language Private Lessons Disallowed for Foreigners."

The Seoul Shinmun had an article on page 11 with the sub-headline "All Private Lessons by Foreigners Prohibited," which contained one line about foreigners: "Unqualified foreign instructors are unethical."

As we saw in the last post, a law which passed in November 1983 and came into effect in July 1984 required businesses or hagwons to "select people with qualifications appropriate to the form of employment," and hoped to cut down on the number of foreigners working in hagwons. With this new law, private lessons by foreigners (which had not specifically been mentioned by the previous law) were banned, and a specific visa was needed to teach in a hagwon. In the wake of the Le Monde article of August 12, a flurry of articles painting foreign teachers in a negative light had preceded a change in the law regarding their employment, which was now tied to a visa and required slightly stricter qualifications. It doesn't sound familiar at all, does it?

Despite this 'victory,' however, the focus on foreign teachers was not quite over, as we will see in the next post.
Posted by matt at 8:56 AM

I wonder if this series will inform the discussions of foreign teachers who seem to discourage any talk of discriminatory animus against them.

There's appears to be a flagellant streak in us.