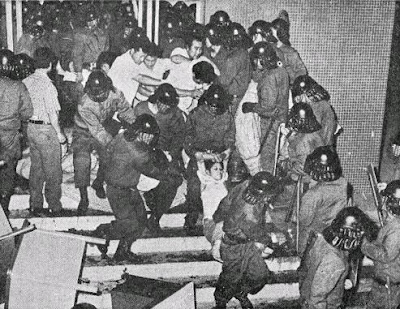 Photo from here.
The government cracked down on female workers from the YH factory holding a strike in the opposition party headquarters, which left one woman dead. When Kim Young-sam used this to gain sympathy and began promising to bring down Park Chung-hee's government, he was stripped of his membership in the national assembly, which led students and citizens to protest violently in his hometown of Busan and Masan, which led to the argument between KCIA head Kim Jae-gyu and Park Chung-hee's underling Cha Ji-cheol on how to deal with such protests which led Kim to kill Park, which led to the ascension of Chun Doo-hwan and the Kwangju Uprising. I dealt with this in a little more detail in this very old, unfinished post.

An essay (I haven't read it yet) about women's labor movement and democratization in Korea is here.
Posted by matt at 3:33 PM

You've got many reports and photos of Kwangju Uprising here.
Do you know Jeon Tae-il who burned himself at a protest for improvement of Korea's labor condition in 1970??
There also is a movie about him directed by Kwang-su park.
I didn't see the movie but I read a book about him written by young-lae Cho many years ago..
It was a very sad story and made me think of many things about my life.
But it wasn't shock as much as the photos of Kwangju Uprising that I saw when I was a little girl.
The gloomy past of my country..
I'm sure thanks to people who is sacrificed at that time I can live better now.

You're a quite amazing reporter!

Hi Helen,
Thanks for the kind words. I wrote about Jeon Tae-il here a few years ago, and I have a copy of both the movie and the book. My friend went to the Jeon Tae-il foundation a few years ago and ended up meeting his sister and mother...

Wow! did your friend meet his mother and sister? I heard his mother also has protested for the labor condition since her son had died.

I was sure you must have had the report about him but I couldn't find it. thanks for the link. let me read it right away!