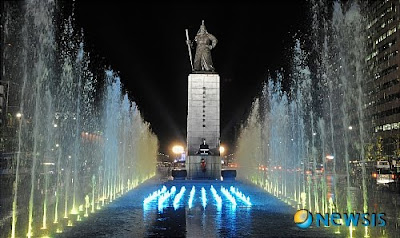 I guess I missed the opening of Gwanghwamun Plaza, which doesn't look to be influenced by Cheonggyecheon at all. From the photo above, it looks to be an all right makeover. It's nice to know that King Sejong will be joining Yi Sun-sin at Gwanghwamun, even if he's taking a back seat to him.

I'm not sure what to make of this: 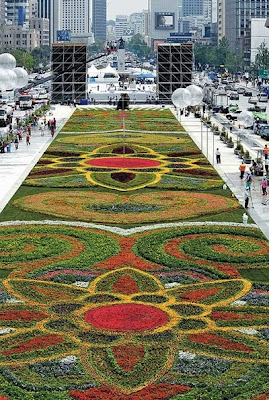 Photo from here.
It looks nice enough, but masks a perhaps unhealthy obsession with history-related numbers.

The Square features a 162 m long and 17.5 m wide flower carpet consisting of 2.24 million flowers. The exact number, 224,537, represents the number of days from Oct. 28, 1394, the day when the Chosun Dynasty moved the capital city to Seoul, to the opening day of the square.

Whose idea was it to calculate that? Has anyone checked to see if there are actually that many flowers there?

I'm only partly kidding, because checking into this turned up some discrepancies:

Reconstruction of the plaza was undertaken not only to give the area an aesthetic upgrade, but also to restore it to its original state prior to the Japanese colonial era (1910-45).

In a Seoul city survey conducted when project planning began, 62.8 percent of respondents reacted positively to the idea of returning the plaza to the way it was during the Joseon Dynasty (1392-1910) and removing traces of the Japanese colonial era.[...]

Now, the lengthy Joongang Ilbo article that is from is worth reading, but I fail to see how turning Gwanghwamun into this... 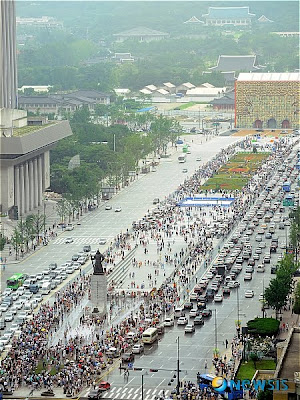 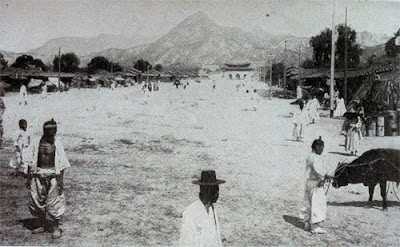 (By the way, the photo above is from the Joongang Ilbo's interesting "Old Seoul: frame by frame" series, which they helpfully compiled here.)

In fact, if you read the rest of the above passage in the article, there is nothing about what this plaza has restored. Except for one thing. Now, how did the city "remov[e] traces of the Japanese colonial era"?

A total of 29 gingko trees that had lined Sejongno since the early part of the Japanese colonial era were removed in an effort to root out the remaining traces of Korea’s painful past.

Fourteen of them were replanted near Simin Yullin Madang, a park near the Ministry of Culture, Sports and Tourism in central Seoul, and 15 were replanted in front of the Central Government Complex.

Wow. So they moved 29 Gingko trees. That must have been cathartic. When the city opened Namdaemun's doors in 2006 so that people could walk through the gate, the public was told that it was the first time in 99 years that the doors had been opened since the evil Japanese began destroying the wall surrounding the gate. The only problem with this was that it wasn't true - there are photos showing it open over the years, even as late as 1960. I get the feeling that Gwanghwamun plaza is being sold to the public as a reclamation of the nation's diginity in a similar way, except much lamer. I mean, gingko trees? 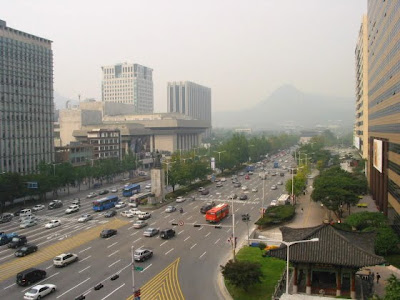 From here.
Photos of them at their new location can be found here, where they are described as trees planted 100 years ago by Japanese people. There's just one problem: 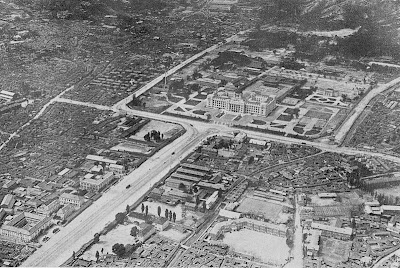 In the above photo from the 1930s, a close look at Sejongno turns up... no trees, so they're hardly 100 years old. The photo below, taken by Don O'Brien (whose photos I've looked at before) in the fall of 1945, does indeed show the gingko trees: 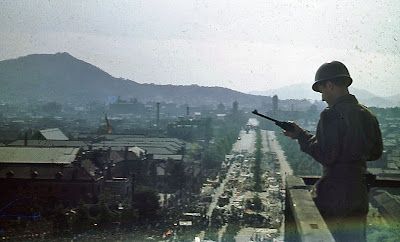 It's hard to know when the trees were planted, but it was likely either in the mid-to-late 1930s or 1940s. I guess if you wanted to link their planting to the worst period of Japanese militarism, you could, but no one has, and I can't help think people are being sold a false nationalist bill of goods in the marketing campaign for the plaza. Of course, it's certainly not the first time, and you have to wonder why it's thought to be necessary.

Another thing that's interesting is how urban projects are marketed by announcing that they will restore the past, when they do nothing of the sort. One of the more glaring examples of this was Jongno Town, which saw a stretch of Pimatgol destroyed to make way for it. A poster advertising it had written on it "Pitmagol is reborn!" I'll save that for another day, however.
Posted by matt at 2:49 PM

I was angry that they removed Chung-angch'ŏng (it could have been moved) and I wasn't happy about the twenty-nine ŭnhaeng nam being removed. But at least they weren't destroyed.

Like a lot of proclamations from tourism sources, I take it a little fuzzy. Just as I don't complain that they use concrete instead of adobe to rebuild California's missions, I don't get too upset about things not being exactly as they were 100 years ago.

More to the point, at least you have an open space, as there was before, and Kwanghwamun will be rebuilt in its original position (that part's right, I hope).

I wouldn't mind if the rebuild of Namdaemun included a tasteful but functional extension of the walls to whatever modern structures are on either side of it. If done properly, that could be kinda cool.

After my 1935 home was razed in 2003, I was deeply saddened. I've since gotten over it. I suppose someone will be sad to see my 1981 apartment block meet the wrecking ball, but I'll be happy, and maybe that's the way the world works. London, Seoul, and Jamestown no longer have thatched roofs, and there's a reason for that.

I'm getting too much into a philosophical funk now.

Thanks for that. The rationale strikes me as ridiculous - the church was built before the walls were torn down, and played a part in the independence movement (something I'd judge as being important). Why it can't coexist with the wall as it once did, is beyond me, especially considering the wall was something I imagine many citizens found quite bothersome, as the people climbing over it in this 1904 picture suggests.

I'm not too concerned about the plaza not looking like it once did, as I know they would never do that, but I find these references to undoing things the Japanese did and getting the facts wrong to be annoying.

matt wrote:
I find these references to undoing things the Japanese did and getting the facts wrong to be annoying.

"Annoying" is the least upset I feel about such things. Often — especially with the big things like the Chungangch'ŏng government building that had been turned into the National Museum — it is infuriating.

The thing is, though, that with such destruction, the majority that is opposed to it doesn't speak out, sometimes for fear of being the only one who thinks that way. Since 2006 I've been planning a post that delves into that sociological phenomenon; maybe I should get back to work on it.

The ginko trees might have been planted elsewhere first and moved...sort of like how they moved it now. Also, modernizing historical places is sensible, especially if the country is the 11th economy. They can't rebuild a dirt road. You don't see Tokyo quite like it was a hundred years ago, much is changed, sort of like Korea. Paris does not have street vendors and studios along the Champs Elysees, it's full of shops and residences.