The first English lesson in Korea 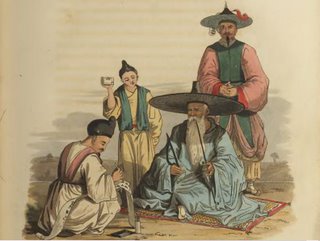 Corean chief and his secretary,
Drawn by William Havell (official artist to Lord Amherst's
expedition to China), from a sketch by Captain Hall
I was re-reading some old posts looking for something the other day and ended up coming across an episode I'd forgotten in my first post about western explorers' visits to Korea. This story is related in Basil Hall's A Voyage of Discovery to the Western Coast of Corea and the Great Loo-Choo Island in the Japan Sea, 1818, which can be viewed here (download the plug-in). The book relates Hall's visit to the coast of Korea in 1816; compared to some later explorers, Hall's expedition generally tried to follow the Korean desire to have, well, nothing to do with outsiders (though I should note that that was the desire of Korea's rulers - not necessarily of Korea's people, who were often curious to interact with the foreigners, when they were not being watched by others).

One instance where the British nearly got into an altercation with the locals was when, upon reaching an island where all the women and children had fled at their approach, they explored the island with some local men accompanying them. As they approached the likely hiding spot of the women and children, the men tried to stop them, which led to a confrontation which had the most unlikely of resolutions:

I turned round and exclaimed “Patience Sir!” he drew back… and a moment after called out himself, “Patience Sir!” The others hearing this caught the words too, and nothing was heard for some time amongst them but “Patience Sir,” pronounced in every instance with perfect propriety. They seemed surprised themselves on discovering powers of imitation hitherto in all probability unexercised. This incident brought us better acquainted, and we remained on the top of the hill teaching them English words till it was dark.

Thus we have Hall describing, on September 8, 1816, what was likely the first English lesson to take place in Korea. It was likely partly out of that conversation that the page below, which translates several Korean words into English, was written: 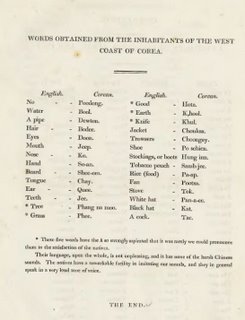 It's interesting to be able to identify a number of words in use today; errors may be due to Hall's men mis-hearing the Korean words, or due to pronunciation which was different than today.

The only other visit to Korea by English speakers prior to this would have been Broughton's voyage, which stopped in Pusan harbour in 1797, but there is no indication of language exchange; in fact, the Koreans described it,

We provided them with brushes to write and their writing resembled like mountains covered with clouds. Though pictures were drawn, we still could not understand.

So it seems likely the impromptu lesson in 1816 was Korea's first, though one wonders if the 200th anniversary of English lessons will be celebrated with much gusto in 2016...
Posted by matt at 1:55 PM

The mark of the Korean words are interesting. I can't identify some
words and I can see some errors of pronunciation.

Nowadays, it's common to exchange cultures,languages and other things with foreigners in Korea. but many Koreans still have unwelcome attention or curiosity for them I think.

As for me, until a few years ago I hadn't seen any foreigners near my area nor talked them in person. more over I've never been to abroad for even trip. so I also wasn't familiar to foreigners.
I could have learned English via books,cassettes,emailing etc.
But I realized that I need to meet and talk foreigners in person to break mental barrier.

I wonder how my ancestors felt when they saw foreigners at first.
They might be shocked at first..