The weekend before last I glanced at naver.com and saw on the front page a shot of skater Kim Yu-na, reminding me she was then competing in the U.S. The blog "Axels, Loops, and Spins" commented on the 'Pep squad' that materialized for Kim's performance:

Between the end of the Pairs competition and the start of the Ladies short I went and grabbed some dinner. Upon returning to the Arena, I found a sea of Korean flags! I must tell you I've never been to an event where Yu-Na Kim competed. I asked a couple who was sitting near me who also travel to lots of skating competitions and they said "Oh yeah, she has a traveling entourage of superfans! Where she goes, they go!" Once we got inside the Arena, the walls were instantly decorated with Yu-Na signs and messages. It's like the Arena underwent an instant transformation. At the same time, all those people outside with the flags took seats bunched together in one corner of the arena...suddenly Yu-Na had a pep squad! 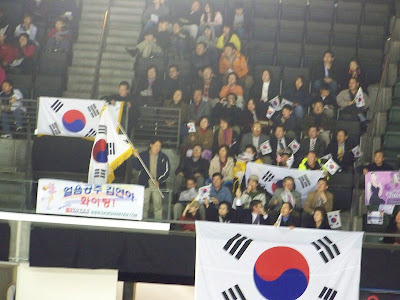 [...] I think the Gold is wrapped up already. Yu-Na Kim was mesmerizing. She had a little flub up on her double axel but nobody cared because the rest was just so good! When the marks went up she was close to 12 points ahead of Miki Ando! The Korean pep squad went berserk! Yu-Na just sat there in the kiss and cry and shyly waved at the camera...geez! As soon as she left, the superfans quickly dispersed. I asked the couple behind who had some experience with the superfans and they noted they were now on their way to the hotel to stalk Yu-Na there!

A video of her short program is here. After she won with her long program and received the gold medal, the English language media in Korea made a few references to her, and the same blogger wrote (despite the "stalking") that "The Yu-Na Kim superfans are amazing!". Gathering in one section to cheer a Korean athlete is by no means a new, post World Cup phenomenom. Here's a photo of Koreans in Las Vegas cheering boxer Kim Deuk-gu in 1982 (at the match which cost him his life). 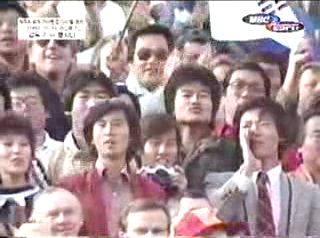 You can be certain that the fans who come to cheer these athletes have a better attitude toward athletics in general than the editors who almost uniformly ran pictures of Kim Yu-na's fall in the 2007 world championships ("Hmmm, do we run a photo of the 99% of her routine which was successful, or the 1% that was not?"). Whether in online newspapers or the front page of naver, it was the fall which everyone saw first, along with the text announcing her bronze medal, which, if we haven't forgotten the Olympics two months ago, is seemingly worth almost next to nothing, though things are probably better than during the 1988 Olympics, when this description of Korean medal winners appeared in the New York Times:

Champions have been feted and paraded before the nation, their lives chronicled and rigorous training methods reviewed. But the second- and third-place finishers have either apologized for not having taken first or have seen their performances characterized as failures. 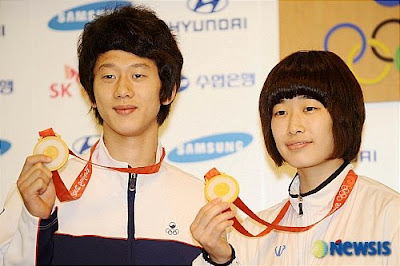 These days, the narratives of struggle and success can take on a different tenor if the winner is female. When Lim Su-jeong (above, with her moptop influenced by the Suh In-young cut which has infected the nation for far too long) won a gold medal in taekwondo in Beijing, we certainly got the story of the sacrifices she made when she was training, but there were also numerous inane headlines accompanying her photos, talking about her 'pure smile' or her 'cute sticking-her-tongue-out pose.' While commenting on her purity isn't such a stretch, the tongue pose headline is a bit odd. One of the reasons this form of coverage was decidedly uncommon in 1988 would be because there weren't many women sticking their tongues out in a 'cute' fashion for the cameras in the first place, a reaction no doubt influenced by cutesy sticker photo machines (Japan strikes again!) but perhaps even more so by eoljjang websites, which are discussed in a 2004 article here and more recently here (while the selka (self-camera) aspect of eoljjang is discussed here. Of course, these sites don't just have still photos, but also feature animated gifs which both encapsulate the nature of some of these poses by showing them all at once, and unwittingly illustrate the hyperspeed at which this society can move.

I can't decide whether it's hypnotic or disturbing...
Posted by matt at 1:49 AM

Hi there! Thanks for the blog mention. I truly meant "stalk" in the nicest sense! I think it's amazing that so many people came to support Yu-Na and wish more fans would show the same enthusiasm. She is mesmerizing and so very lucky to have devoted fans!