Thursday was the college entrance exam, which I've looked at in years past here and here. The English language press here have published a few articles (Michael Breen's article is worth a look) including a Korea Times article titled "Korean Test Culture ― Too Unique." This differs from a 2005 KT article titled "Foreigners Taste Unique Culture in College Entrance Exam Here" (the link is dead) in that this year's article actually quotes a foreigner or two. It opens with a sentence so painful you might just want to skip it:

Not only to foreigners who are unfamiliar with Korea but those who are already accustomed to the country think the state-administered college entrance exam is a unique cultural experience that they can hardly understand or witness in other nations.
Company workers and civil servants were supposed to report to work one hour later than usual to ease traffic jams which could disturb test takers. Drivers were restrained from honking their horns when passing by schools and aircraft had to delay landing and take-off during Korean and English listening tests.

The government mobilized all measures to support university hopefuls Thursday. To help transport test takers and secure the safety of exam places, some 14,000 policemen were positioned with 4,200 motorcycles and emergency vehicles. The National Emergency Rescuers were also called in to help provide transportation for test takers in their ambulances. 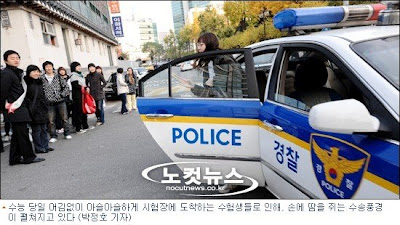 Police escort a student to the test (from here).
It goes on to tell us that "Some 590,000 high school seniors and graduates took the College Scholastic Ability Test at nearly 1,000 schools across the nation starting at 8:40 a.m." This Chosun Ilbo article tells us more:

All students must be inside the test rooms by 8:10 a.m., carrying admission tickets and ID cards. Mobile phones, digital cameras, MP3s or electronic dictionaries are not allowed.

The ban on phones and mp3 players is due to a scandal in Kwangju in 2004 when a cheating ring was caught. The KT article continues: Parents pray at Jogyesa in downtown Seoul (from here). 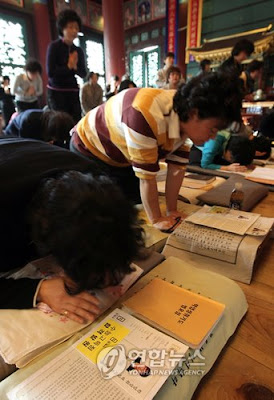 (From here.)
One of the things left out of the KT article (though it was illustrated) was the 'unique' cheering culture, where first or second grade high school students stay up all night waiting for the test takers to arrive and cheer them on. The girls in the photo below wrapped in blankets were likely there all night. 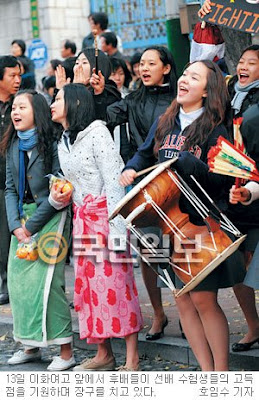 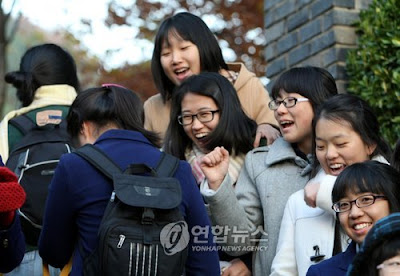 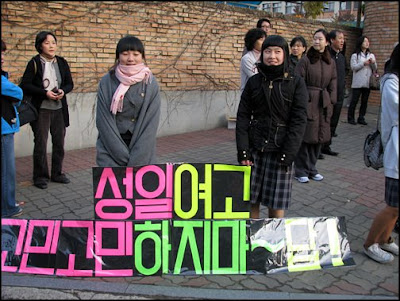 (From here.)
This video gives an idea of what this all sounded like this year.

Of course, the Metropolitician made a video last year that looks at the same subject. For the weirdest photo of cheering, well... 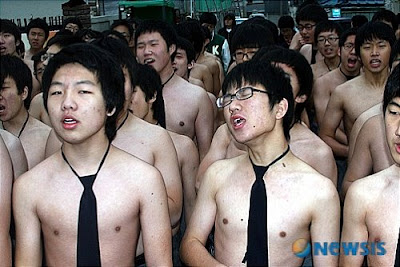 This photo of students in Chuncheon is also in the Korea Times article, where in the comments Scott Burgeson writes:

10 or 20 years from now they will literally be dressed exactly like that when they are all sitting in their local "business club" or "room salon" getting wasted and debauching themselves after a hard day's work. This picture is more prophetic than even those boys can imagine.

Well, if they've been on field trips to China, maybe they can already imagine that future. In truth, the way they are lined up rank and file reminded me more of this (and of the way in which kindergarten children I've seen running around a large room doing a fitness program would be all spaced out when the foreign teacher was around, but as soon as they were observed by a Korean teacher, immediately formed a tightly packed line, which made the exercise pointless).

Beyond the cheering (which was an odd omission) one aspect of the university entrance exam that was left out was the suicides that follow the test (or preceed it, or which come after the test scores are announced in December. There's a good post looking at this over at the Hub of Sparkle, which looks at a protest against the competitiveness of the education system and the test which took place on test day (I looked briefly at the subject of exam related suicides last year). It's not difficult to find articles in the Korean media that deal with this subject (such as this one which looks at mental health issues surrounding test takers and the possibility of suicide), but it shouldn't be surprising that an article touting the 'uniqueness' of the 'test culture' for foreigners would overlook this rather negative ( and totally predictable) aspect of it. It's odd that they forgot to mention the fact that after the test students could get discounts at family restaurants like VIPS. 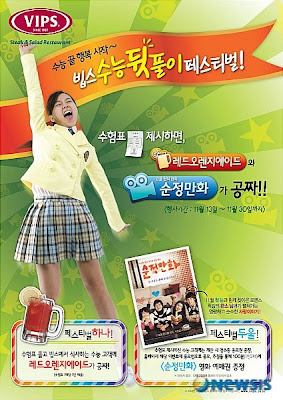 While it might look like the girl is shouting in relief at being finished the test, she's actually screaming in rage, and the banner reads, "I sacrificed my childhood and all I got was a free red orangeade!"
Posted by matt at 3:00 AM

They strip their shirts off and shout emotional cheers of support for the seniors so that the media can pretend that there's actually a modicum of "real-life, flesh-and-blood humanity" in this entire process.