Beaten to death... in middle school 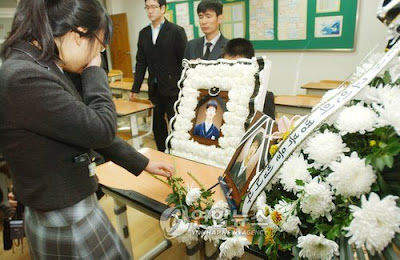 I was curious to know if this story had gotten much attention after it was at the top of Naver yesterday (one of those stories that gets rotated into view). On the afternoon of November 6 near ‘an apartment building’ in Bongmyeong-dong, Heungdeok-gu, Cheongju city, a second grade middle school student, a 14 year old with the last name of Kim, was beaten by at least three of his classmates before falling into unconsciousness. He was sent to a local hospital, and eventually to Seoul, but nothing could be done to help him, as he was brain dead.

There were apparently 9 other students from the same class around the same area when the attack occurred, but at the time of an earlier article the police had not confirmed whether they were involved. A later article says that the police are planning to apply for an arrest warrant for Lee on charges of assault causing death.

His parents chose to donate his organs on the 13th, which were given to 9 people. This article also mentions the effect on his family, as he was the only son and the oldest grandson in his family, but, despite the fact organ donation after brain death isn’t so common here (according to this abstract) his family thought giving the gift of his organs would make it so his death wasn’t for nothing. 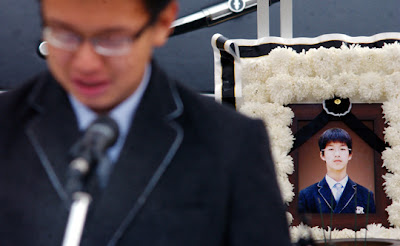 The photo above is taken from here, and another article about the funeral, which took place on the 16th, is found here. One wonders how much the cries of ‘My friend, I’m sorry’ from his classmates are coming from protocol, and how much they’re coming from the fact that they may have known what was going on. 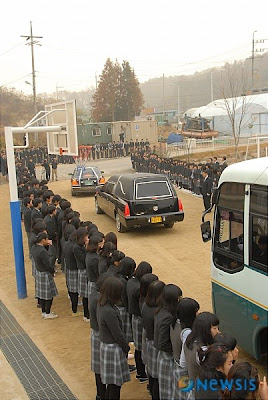 Above, Kim's body arrives at the school before leaving for the crematorium. As for the picture below, I guess that answers the question about whether the story had gotten much attention. 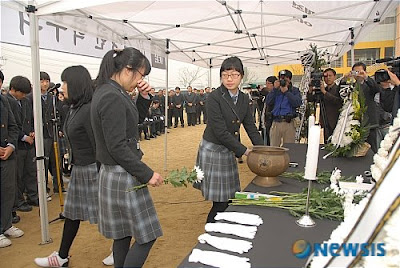 Of course, the media normally pushes its cameras into the faces of those mourning the loss of the of their children, classmates, or... the Winter Olympics. A quick search turned up another group beating in Cheongju in 2006 of a middle school girl, complete with video of her bruises. These kind of beatings aren't rare, and it was just last week that a post about a beating in Bucheon (by his schoolmates) that left a student in the hospital but was covered up by the school lead to a much larger discussion of violence by teachers against students in schools. Who knows if the school would have preferred that in this case, but when the student is dead, it's much harder to cover up... but not impossible.
Posted by matt at 2:30 AM