Lies and Rain: One step forward, two steps back 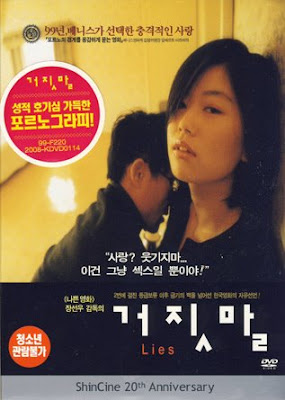 Sexual Curiosity-filled Pornography!
I just noticed that eight years after it was released in theatres, Jang Sun-woo's Lies, about a sado-masochist relationship between a high school girl and a 38 year-old sculptor, is finally being released on dvd. Judging by its running time, it appears to be uncut (but has no English subtitles, likely because of the existence of a US dvd).

The film was released in 2000 only after having, according to this review, five minutes cut from the film, including having the sound cut during a conversation about sex between two high school girls and the removal of every reference to the girl being a high school student (the Korean-released VCD of Lies had 20 minutes cut from it). The fate of the book that the film was based on is rather interesting as well:

Lies was intended by its producer Shin Chul as a deliberate challenge to Korean censorship; the novel (Jang Jung-Il's fourth) was banned, recalled and pulped less than a month after it was published in 1996, and the author subsequently had to serve two months in jail as a "pornographer".

Jang was the first Korean writer to be convicted of pornography, and the film based on his book certainly riled conservatives up. Speaking of the appointment of a female police chief to crack down on teenage prostitution in Miari Texas, a former AP reporter wrote in the Korea Herald on January 18, 2000:

What was more ironical, even senseless, however, is that her appointment came at the time when the controversial movie, "Lies," was allowed to be shown in theaters around the country after public censors snipped out some part of the allegedly offensive pornographic scenes.

The movie, I understand, is about a high school girl - naturally, she is not yet an adult - who engages in an explicit and perverted sexual adventure with a married artist in his late 30s. I have not seen the movie for fear that I might throw up in the theater. Nonetheless, I feel I can express my opinion as I have read enough about it in newspapers and magazines, including a synopsis and graphic description of scenes.

This attitude is mentioned in an opinion piece in the Korea Herald from January 22, 2000 by Cho Woo-seok, an employee at Incheon Immigration (!):

Son Bong-ho, a well-known professor at Seoul National University and a leader of the civic group which filed suit against the director, has been highly critical of the movie. Son said: "How did Korean's morals drop down to such a low level? How can you accept as art a movie in which a married man in his 30s has sex with a high school girl? How could they make such a nauseating movie just to make money?" Most leading newspapers and media groups have expressed similar criticism of the movie. While reading their attacks, I noted a key irony: most of the writers said they hadn't watched the film because it was too dirty.

The AP writer noted that

according to an exit survey conducted by a television network shortly after they began to screen "Lies," an overwhelming majority of them said the movie was pornographic and that they would not recommend it to their friends.

We all know how influential movies and dramas on television are, especially on sensitive and impressionable young people. That is why I thought it was unfortunate and unwise for the movie industry to show pictures like "Lies," at a time when the whole country is undertaking a nationwide campaign to root out teenage prostitution.

Well, like all crackdowns, the campaign failed, and teenage prostitution is still with us. It's interesting to see that, unlike the "20 minutes missing" vcd released in 2001, an uncut dvd of Lies can finally be released here (just like it's nice to see that - I think - foreign movies aren't being ridiculously cut to pieces any more (watching a movie like Starship Troopers on video in 2001 was just hopeless)). On the other hand, fears about "sensitive and impressionable young people" are still with us, or so says the Korea Times:

The entertainment industry is abuzz over "dance machine'' Rain's hot track "Rainism,'' which has recently been banned from sale to teenagers over its lewd lyrics. The singer agreed to change a few phrases for his underage fans at concerts but expressed regret over the government's decision on the already chart-topping record.

"Dance machine?" Nice to see the KT fulfilling its role as a PR machine for the Korea Wave [goodbye].

The Youth Protection Committee of the Ministry for Health, Welfare and Family Affairs said Monday that the lyrics of "Rainism'' are lewd and harmful to teenagers. The record will be sold with a red sticker and will be banned from sales to those under 19 years old, according to the committee.

Problem solved. The Youth Protection Committee are geniuses! Forget the massive decline in cd sales over the past eight years - stickering cds is sure to stop kids who don't even know what a cd is from downloading the song! What a thoughtful use of taxpayers' money! This rates up there with the webpage on their site years ago that listed all the 'off limits' areas for youth across the country - essentially giving a guide to all the large red light districts across the country in both Korean and English (they beat the KNTO at their own game!). But let's see what set them off:

The parts that the agency did not like were "Spinning is my magic stick inside your shaking body/ The body shake that feels the limit it cannot go beyond,'' in which the writer, the singer himself, is allegedly describing sexual intercourse between a man and a woman.

However, Rain and his agency, Jtune Entertainment, explained such wording is quite common in Western pop songs and Korean fans are mature enough not to be affected by them. The song passed three major broadcasters' screenings and swept domestic pop charts.

Sorry, but this really is necessary to point out just how correct Jtune Entertainment is:

Wonderful. I had to crank up the Jesus and Mary Chain's "Never Understand" to scrape out my eardrums after that. When I heard "I'm gonna be a bad boy - a bad, bad boy," I suddenly realized that this was the song that a 10 year old student was singing last week (she thought it was funny, though I think she understood 'bad' to mean simply the opposite of 'good' - of course, I could be wrong). Just in case you didn't catch it, the offending lyrics are "Spinning is my magic stick inside your shaking body/ The body shake that feels the limit it cannot go beyond,'' but the most 'offensive' parts - 'magic stick' and 'body shake' - are in frickin' English. If the Youth Protection Committee is going to go after lyrics which are partially in English and combat them by preventing youngsters from buying a music format they rarely buy anyway, they'd better make up for it by raising holy hell over this sentence, because, to my naive mind, nothing is more lewd or harmful to a teenager than being raped by four relatives between the ages of 9 and 16.

Jtune said Tuesday that Rain would change the criticized parts for performances but leave them on the album. "He will rewrite several phrases because he obeys the law. However, the committee's idea of sex appeal is totally different from that of Rain's. Is there a clear criterion to assert lewdness?" it asked in a press release.

On the one hand, the argument over what is lewd harkens back to the Lies debacle, and on the other hand, the assertion that "he obeys the law" would appall Bill Hicks. How clean-cut of him.

Some Internet users allege that the government is helping boost sales with the announcement. "Now everyone will try to listen to Rain's song to see what's so lewd about it. The government is actually a secret supporter of the singer," ID:Jackie said.

You can't help but remember the effect of the Ministry of Defense's ban on 'seditious books' this summer which caused them to soar in popularity. I certainly hope Jackie's not on to something; the world does not need a Korean government conspiracy to augment the Korea Time's PR activities on "dancing machine" Rain's behalf.

However, some defended the decision, saying K-pop needs to watch its wording. "I hope this will influence some other singers who talk about all lousy things ― teenage singers talking about mating and showing off their legs or breasts seems too much,'' ID: sincerely said.

I hope"showing off their legs or breasts" doesn't refer to the Wondergirls, because that's, like, totally wrong. Wait - "talking about mating"? I sort of hope there isn't a Korean version of the Bloodhound Gang - the world only needs one.
Posted by matt at 8:34 AM

It's too bad that Lies isn't actually a very good movie. To a non-Korean I guess it can be a window onto a rarely-glimpsed aspect of Korean society, but otherwise it isn't really worth watching.

Not that it would not be possible that for example the "full frontal" shots of the male lead in Lies would not be left uncut in the release, especially as the country sends abroad in promotional packages a film that has a scene of penis being skewered by a bamboo stick (Kim Ki-yeong's Ieo-do from 1977), but let me still be doubtful. Seoul Selection has the running time as 114 minutes, but a Korean online site has the length as 102+11 (film, trailer, and 9:31 feature of the female lead in Cannes). And the "original" runnint time appears to be 112 minutes, if IMDB is to be believed.

No, it's not the greatest movie, to be sure. The ruckuss it caused was more interesting than the movie itself.

Antti - thanks for the detective work... I guess audiences would still have to rely on the uncut US dvd... (if they wanted to).