6.5% of middle and high school girls have sold sex?

One in every three female secondary school students in Busan were found to have received sex trade proposals while chatting online, according to a survey by the Ministry of Gender Equality Monday.

Perhaps some of the girls intrigued by such offers might not be if there was a viable sex education program in Korean schools.

"It's a survey of students in Busan and it could be difficult to generalize. But it's obviously a case in point showing how serious online sex trading is," a ministry official said. It also shows that many teenagers are vulnerable to the online sex trade, he said.

It's "difficult to generalize." I hope so, because let's do the math. "Nearly 20 percent" (actually 19.6%) of the 672 who were propositioned said they sold sex, which means about 130 out of the total 2,012 girls sold sex, which is about 6.5%, which is a disturbing figure. Perhaps it's higher in Busan (where Mee-hae Kong did the research for her 2003 article Material Girls: Sexual perceptions of Korean teenaged girls who have experienced 'Compensated Dates', which can be found here); it would be interesting to see a similar survey done in Seoul.

As for vulnerability to the online sex trade, this Kuki News article in Korean on the same topic illustrates this vulnerability a little more concretely by relaying the story of third year high school student 'A' from Daejeon who in August was offered 200,000 won to meet a man for sex. Curious, she met the man, Mr. Kim, a doctor, at an officetel and slept with him. He then offered to pay her 200,000 won to meet once a week, and she met him 7 times, earning 1,050,000 won. Then he was caught. For some reason the Korea Times didn't want to illustrate the problem at hand with such an example. 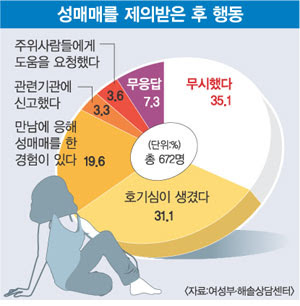 The Kuki News article has the above graphic titled "Action taken after receiving prostitution proposition:" 35% ignored it, 31.1% were curious about it, 19.6% had met the person and engaged in prostitution, 3.3% had reported it to an 'agency', and 3.6% had asked someone nearby for help, and 7.3% offered no reply to the question.

Among those who sold sex, 37 percent said they did so on impulse, 25 percent did so for money, and the rest out of curiosity and other reasons.

Asked about the reasons for the frequency of sex transactions online, 37 percent cited easy accessibility and 33 percent anonymity. The rest answered that they can sell sex with little worry of being caught by police.

It's worth remembering this article translated by James at the The Grand Narrative, titled, "3 out of every 10 dating sites are being used by teenage prostitutes to find clients." There was more going on than that, of course:

In addition, Daegu YWCA opened a chatroom on one site for 2 hours, and of 48 male users that entered, 25 were blatantly looked for teenage prostitutes, 19 chatted about sexual acts, and only 4 chatted about non-sexual subjects.

It's interesting that the term seong maemae, a generic term for prostitution, is used here instead of wonjo gyoje ('compensated date'). Has that term perhaps been retired? Much more on teenage prostitution, especially under the guise of wonjo gyoje, can be found in a post I did a year or two ago here (scroll down).

The sad thing is that by not including the upper grades of elementary school, they're probably missing out on useful data. Needless to say, articles like this (from 2003 - which has three stories of 12 year olds meeting up with men in their twenties) are pretty disturbing, and statistics I've seen but can't find right now suggest that they are rising.

Crossposted at Hub of Sparkle.
Posted by matt at 8:21 AM

What's also interesting are the "Korean Dating Sites" that appear in Google ads to the left of that KT article. In this way, KT profits from the same industry it morally condemns.

I'd like to know a lot more about the methodology of the MoGE survey. The article doesn't mention anything about random sampling or anything along those lines.

While that doesn't mean it isn't a proper survey, there have been many cases cited of online voluntary participation (essentially online polls) that do not go through the rigors of making a random sampling but instead survey a self-selective group of those more willing to be open about some topic, which often is not a true representative sample.