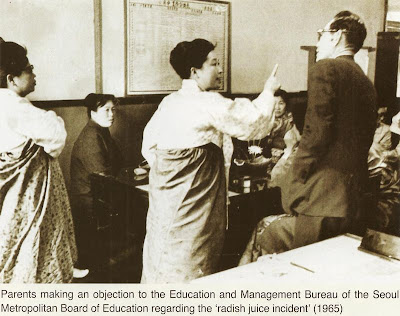 What exactly is 'rice taffy'? Is it ddeok? [Edit: It's yeot.] Anyways, you've got to love the never give up, ignore the boundaries put in your way, bullying spirit of those parents. As Arnie Pie put it once on the Simpsons, 'It's a silent testament to the never-give-up and never-think-things-out spirit of our citizens'. I'd love to have been present for those supreme court proceedings. I wonder if transcripts still exist.

What I find notable is that not only was there once a high school entrance exam for middle school students (which was done away with in the 1990s, if I remember correctly) , but there was once a test for elementary school students entering middle school! While the system now might seem less harsh seeing as those two exams are now done away with (for the most part), I have to wonder if the 'SKY university as a gateway to your entire future' system was as entrenched at that time. To be sure, the incident described above goes to show how important education and testing is and has been in Korea.
Posted by matt at 2:44 AM

Yeah, I was thinking that too and looked it up and found a script for that show online... but I think it was just transcribed by fans and they got it wrong. Thanks for confirming that.

Fascinating! Wonder how all that figures in to No Child Left Behind. I guess its the angry pro-active mothers who make all the difference.

I think the rice taffy in question must be yeot, not ddeok . . .