I've been reading Carole Cameron Shaw's The Foreign Destruction of Korean Independence, which, while it lacks the evidence that would prove that the U.S. was responsible for the loss of Korea's independence, has been interesting to read, gathering as it does letters from numerous people involved with Korea at that time, such as D.W. Stevens, the American Legation staff, missionaries, members of Roosevelt's government, and many others. She does manage to point out the different connections between many of the American players, and shows that many in the U.S. government felt sympathetic to Japan's aims in Korea, but fails to convince that the U.S. was responsible for Japan's control of Korea.

With all the names mentioned in the book, and their backgrounds (several times I came across names I'd seen before and thought, "So that's who that person was") I began to look up some of them, and eventually found this page about Willard Straight. What's most interesting are the pdfs of letters he wrote from the American Legation in Seoul in 1905. One of the more interesting letters is "Another letter to Henry Schoellkopf", which describes the aftermath of the protectorate Treaty being signed in November of 1905.

Straight would go on to help found The New Republic in 1914, which published Randolph Bourne and was first edited by Herbert Croly. Both Bourne and Straight died from influenza in December 1918, and ten years later Croly would write a biography of Straight, from which this photo is taken: 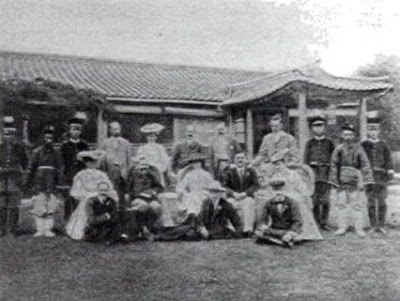 This is a photo of Alice Roosevelt's party when she visited Korea and met the emperor in September of 1905. Earlier in the trip, her party included Secretary of War Taft, who had a conversation with Count Katsura when they visited Japan in June. This was the well known Taft-Katsura memorandum, which some point to as evidence that the US had 'traded' Korea for the Philippines. At any rate, this remained secret until October 1924, when Tyler Dennett wrote "President Roosevelt's Secret Pact with Japan", and provided a copy of the memo. Scans of this essay and the memo can be found here.

While looking for more information on Alice Roosevelt's visit (the schedule for her visit to Korea can be found with Straight's letters, linked to above) I came across an article about Michael Straight, one of Willard Straight's sons who was a communist and spy for the USSR. He also has a Korean connection:

One of the strongest points made by Perry and other critics of Straight concerns the Korean War. Thanks to Philby, Burgess and Maclean, China's Chairman Mao knew that President Truman had decided not to use atomic weapons if China intervened in the war. Mao was thus free to invade North Korea and kill many Americans in conventional warfare without fear of the bomb. If Straight had by then been a loyal American, free of communist control, he could have revealed his old colleagues as spies and saved many American lives, but of course he did not.

Had he talked then, many Korean lives would have been saved, too.
Posted by matt at 3:09 AM