When the New Haengju Bridge over the Han-gang River which connects [Gangseo-gu] in Seoul City with the Goyang city, Gyeonggi-do in Korea was under construction, its 10 bridge piers and the bridge girder of 1020m length collapsed. The fault originated in the cable-stayed bridge part in the center just before the completion.

The main reason few know about this is that the collapse occurred at 6:55 pm, 25 minutes after construction workers had finished for the day. As a result, no one was hurt. 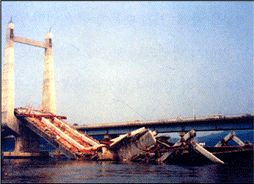 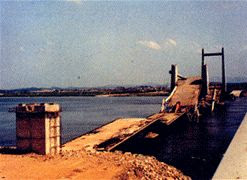 Photos taken from here.
Amazingly, mbc will actually let you watch a 3 minute news broadcast from that day (here - in IE only).

In the atmosphere by the rapid economic growth in 1970's in Korea, the bridges constructed in the capital city Seoul were criticized for lacking aesthetic sense in 1980's. The government officials who reacted to this criticism too sensitively applied the PC cable-stayed bridge easily which was the latest method and the appearance was graceful and airy, without grasping the safety and structural characteristics. 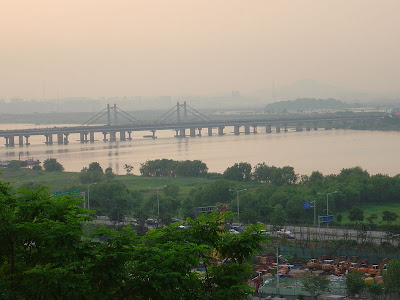 This collapse predated two much better known collapses - the aforementioned Seongsu Bridge collapse, and the Sampoong Department Store collapse in 1995. One shouldn't think this kind of thing is a relic of the past, of course; it was only two months ago the the building site at Gajwa station collapsed, and it was luck that prevented loss of life there.

Somewhat related to all of this is a short film I saw years ago on tv centered around the Seongsu Bridge collapse (which was how I came to learn of it). I just googled about and found out that it's a 1997 short by Marathon director Jung Yoon-Cheol called 기념촬영 (Memorial Photographing), and that it's available on the Marathon dvd as an extra. X over at twitchfilm describes it as

excellent, expertly blending some of the elements of the 여고괴담 (Whispering Corridors) series (mostly those dealing with the sense of loss and the bond between schoolmates) with the tragedy of the Seongsu Bridge collapse in 1994.

Clips of it appear very briefly here.
Posted by matt at 2:09 AM